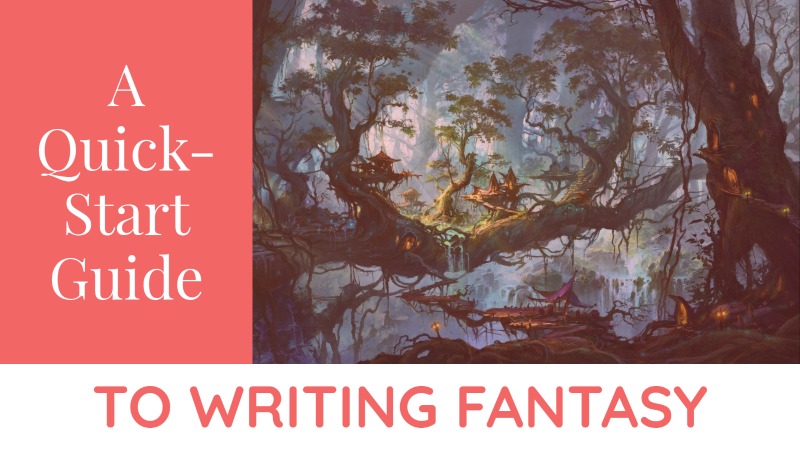 Creating a well-crafted fantasy novel takes time. But, that is in short supply, so let’s cheat!

This quick start guide will show you the basic elements of a fantasy story, and how to get around spending years on making them.

Fantasy is a large genre but this guide can be applied to any kind of fantasy with a few tweaks. The following steps should be applied in order to create your fantasy story.

1. Include A Quirk – What Sets Your Story Apart?

What distinguishes your work from the competition? Is your novel just a new tale about a hero and a dark lord? Hopefully not!

You need a quirk or something that sets your fantasy apart. Harry Potter had Hogwarts, making it a British school drama at heart. And, sure it had a dark lord, a hero, and magic but at its core it was about the time our characters spent at the magical academy.

All well-known fantasy stories have their quirks.

Star Wars had light sabres; The Lord of the Rings had hobbits; and The Chronicles of Narnia

These are the kinds of things that readers or viewers remember when explaining the premise to their friends.

If you can boil down your story to this sort of remark you probably have a winner.

You can think of it as your elevator pitch to the reader.

‘Dragons with incest and snow zombies, you say? Tell me more, Mr Martin’

If you can’t provoke a reaction with this pitch, you probably don’t have a viable story.

Make an elevator pitch in this style and see if your friends react positively to it. If they don’t want to know more, you need to work on your idea.

2. Include Elements Of Fantasy

Oddly, the second thing you need is a fantasy element.

However, you do need to know are the rules, at least for yourself.

For example, we know that in Harry Potter wizards all use wands – like guns. In The Lord of the Rings we know that the Ring gives the Dark Lord his powers. What those are, who could say?

These rules should be consistent and have an internal logic of their own. That is to say presumably Both Tolkien and Rowling knew what the rules were and could apply them to their writing.

But you don’t need magic.

Fantasy can simply be that mythical creatures are real. The Amazon TV show Carnival Row does this well. They never go out of their way to explain this, but we get the sense of a consistent world that runs on rules that the writers understand.

Tone will affect the nature of your world.

That is not to say you can’t do a solemn high magic world or a fun low magic world.

Star Wars is a fun fast-paced example of a low magic setting. Seemingly, the force just helps you lift things and fight your father figures on high gantries, but the tone is adventurous and light; and it works.

But, it is easier to make your characters suffer in a setting where the fantasy elements don’t make things too easy for them. Robin Hobb makes her characters suffer and die from the most common causes. Poison, starvation, and even just exposure to the elements.

If they just had magically warming tents and healing magic (looking at you Rowling), you then need to go to much greater lengths to make your reader believe your characters were in trouble.

But, if you do do that then you will need a Dark Lord or an army of evil wizards to raise the stakes. Which can be fun but just know what it is you are trying to achieve.

Lastly, the ability to bring characters back to life will alter your world’s tone irrevocably. There is no putting that cat back in the bag and there will always be a question in the back of your readers mind as to when their favourite is coming back.

Now that you have the tone, you are able to choose the structure.

Fantasy usually contains too much hope. Trying to make your fantasy fit the structure of a war movie or a literary work may just take it out of the genre completely. At best you would end up with a sister genre like Magic Realism.

Use a simple structure like The Hero’s Journey. The goals should be clear to the reader and the path obvious to the characters. The interesting thing about fantasy is not a convoluted plot, but rather the fantastical world in which it happens, or the quirky character in the story.

5. Think About The Characters

Fantasy is a genre that can thrive on any number of characters. But, the fewer you have the more comprehensible it will be to your readers. While many do love complicated, overpopulated stories, few are able to tolerate more than one book with a sprawling spiderweb diagram of relationships every year or so.

This means that unless you need a character for the plot, you should cut them for the sake of an easier to follow story.

Harry Potter is a good example. While there are many side characters, there are only a handful of main characters and they get the majority of the word count in each story.

You should have no more than six to 10 main characters, and really you only need three: Your protagonist, the antagonist, and the friend/mentor.

Other useful characters are:

Sub-plots should be avoided for the most part and, if you ever do need one, it should directly relate to what the villain or hero is trying to achieve.

A good example of a sub-plot is the B-Plot of The Lord of the Rings. Aragorn and the remaining characters provide an invigorating break from the intense depressing nature of Frodo and Sam’s journey.

Time Saver: Don’t have any.

Lastly, once you have your idea, you should spend some time beating it with a hammer. Don’t destroy it, but you will want to knock out any dents, fasten any loose nails, and most importantly see if anything falls off.

If it does, just leave it. You don’t need to glue bits on that are not working for you. A work of fantasy needs to be air-tight and the more moving parts it has, the more difficult it will be to make it work.

But, I hear you say, Tolkien’s world was insanely complex and it works!

Sure, I say, and it took about 30 years to finish. While other complex stories like Game of Thrones unfortunately fall to pieces rather easily by the third or fourth book.

Keep it simple. You can always build on simple.

Don’t create extra editing work for your future self.

I hope this quick start guide to writing fantasy helps you get started on your book. Have fun making your fantasy worlds. After all, if you enjoy them, then I’m sure many others will too!

If you want to write fantasy or if you love reading fantasy, you will also love these posts:

And listen to these podcasts:

Written by Christopher Luke Dean (Who doesn’t ever really stop thinking about dragons.)