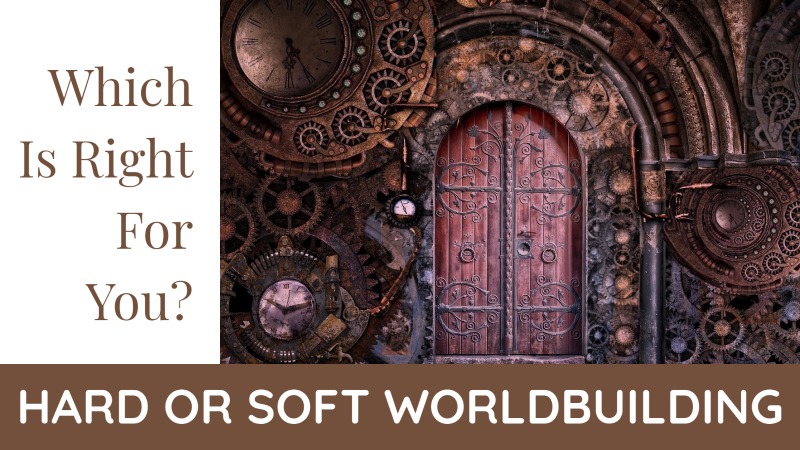 Hard Or Soft Worldbuilding: Which Is Right For You?

In this post, we look at hard worldbuilding and soft worldbuilding. We give you examples of each and tell you which one is best for you.

Have you heard of Hard and Soft Worldbuilding? Until recently, I hadn’t heard of it either. But since I learned about this concept, the way I look at writing Science Fiction and Fantasy fiction has both changed and deepened.

If you’d like to add another tool to your literary tool belt, read on. I’ll share everything I’ve learned on this fascinating subject!

Hard Or Soft Worldbuilding: Which Is Right For You?

Whichever Fantasy subgenre an author writes, how they introduce the world has a tremendous effect on the story.

The more the writer works out the macro and micro concerns of their world– from systems and religions down to where their denizens go to the bathroom– the Harder the Worldbuilding is.

J.R.R. Tolkien was the Champion of Hard Worldbuilding.

He spent over a decade creating a cosmology, history, cultures, and even languages for Middle-Earth. He knew every element of his world and shared as much of that info as he could with readers within the text itself.

That is Hard World-building in a nutshell.

And, while we’re on the topic of Tolkien, here’s a quick anecdote on how passionate he was about his method of worldbuilding:

Well, because Tolkien spent so much time taking the Hard worldbuilding approach, he saw Lewis’s much looser (and thus Softer) approach to worldbuilding with Narnia frustrating. See, while Tolkien drew inspiration for Middle-Earth and its races almost exclusively from Norse and Celtic mythology, Lewis borrowed from any Myth, Fable, and Fairy tale tradition he liked. Narnia has magic carpets from Arabic folktales, centaurs from Greco-Roman myth, and talking animals a la Aesop’s fables. Tolkien couldn’t stand this haphazard, inconsistent approach.

Maybe you’re starting to get an idea of what Soft Worldbuilding looks like and strives for.

An example of Soft Worldbuilding in Fantasy would be the works of Japanese filmmaker Hayao Miyazaki. In his film, Spirited Away, there are all kinds of gods and spirits who visit a bath house. However, we never find out where these creatures are from, what their function is in the world, or how their society is stratified. And, based on how little consistency there is within the world and the magic systems Miyazaki creates, it’s unlikely he had any intended coherency. In fact, Miyazaki admitted he’s often so focused on the aesthetics and emotional quality of his stories, he neglects the internal consistency of his narratives.

The payoff for Hard Worldbuilding is verisimilitude. Meanwhile, Soft Worldbuilding’s hazily defined world allows for greater flexibility for what can happen in the story.

But is there a Middle way between Hard and Soft worldbuilding?

Worldbuilding is, after all, a spectrum—a continuum.

Take Neil Gaiman, for instance. He uses Hemingway’s Iceberg method: he knows around 90% of everything there is to know about his story world, but only reveals 10-25%. And, to fill in the gaps, and create a greater sense of realism, he includes as much mundanity as possible. You will never find another author who talks about his character’s bodily functions more often than Gaiman, and this is by design. When a gnome shows up using magic in Stardust, we are on our guard. But when that gnome later has to pause mid-sentence to run off and relieve himself, according to Gaiman, we are less likely to deny the gnome’s existence because the gnome has to do ordinary things like we do.

A Middle-way Worldbuilder, will, like many Hard Worldbuilders, construct their Fantasy worlds as fully as they can, so that the worlds are as logically and logistically coherent and consistent as possible. But, like a Soft Worldbuilder, they only reveal what is absolutely necessary for readers to know to follow the story. And, thus, they are less likely to overwhelm the audience with so much exposition that it breaks the reader’s immersion.

As with the Plotting vs Pantsing debate, which method of worldbuilding you choose is largely a matter of personal preference.

Now get out there and start Worldbuilding!