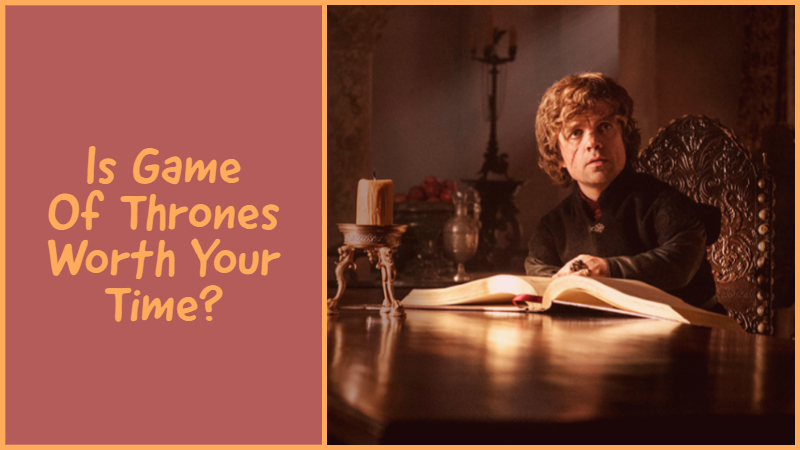 The new Game of Thrones TV series is coming out. This got me thinking about how my opinion of the franchise has changed over the years. Maybe, you feel the same? Is Game of Thrones worth your time?

When I was young and poor, and living on a couch in London, I had a two-hour commute to work. Luckily, it was on a train so I could read. After giving up on English newspapers and their bizarre class dynamics, I started to read fiction on these trips.

London being London, I was spoilt for choice. At the time, I loved comics and manga but could not bring myself to read them in public.

Besides, comic books are expensive. At two or three pounds for 20 pages of recycled paper it would cost £20 a trip to keep me occupied.

Resolving to find a better deal, I left the best comic book store in the world, Forbidden Planet London, and spent my lunch breaks walking through endless new and used book stores. The area was the strangely named Dragon Court near Covent Garden.

London really is the best place to buy books. It seemed to my young self that every street had a multi-storey bookstore with a bargain bin. So, partly because I liked it and mostly because it was the most discounted genre at the time, I read suitcases full of fantasy books.

One day I came upon a set of four books for £10. At the time, it was the entire Game of Thrones/A Song of Ice and Fire

I recall looking at the generic cover, skimming the text, and then tossing the book in my hands to test the weight. Deciding that this was a goodly heft for train trips, I happily bought them.

And over the next few weeks, I consumed them avariciously. I remember liking them.

Then, something changed when I didn’t have several hours to kill in a metal box every day.

I had moved to a sunnier climate and had a car so my reading habits changed. I was in a smaller bookstore in Johannesburg milling around waiting for one of those things one waits for in bookstores.

And then, on a prominent shelf in the front of the store, in the best-selling section, was a new George R. R. Martin book. A Dance with Dragons, I think it was called. With nostalgic optimism, I snatched it down and spent the next five years reading it.

I don’t think I’ll get the new one.

The strange thing is that I watched the last few seasons of the show and really liked it. The books had become, to me, unreadable. They seemed so slow paced. The writing seemed dense and redundant. Which is why I bought them in the fist place.

It made me think about what I looked for in a book and how the world around me affects my enjoyment of it.

Back then, before the internet was just always everywhere, I really appreciated the slow-paced writing style. What did it matter to a young me if a writer wrote a full page description of each meal?

Now, I have a list of objectives. I always have something I should be doing even if I don’t get them done on time. I don’t have a forced time for doing nothing. There is no space left to fill with something I don’t already know is going to be good.

This is sad now that I write this.

While Game of Thrones is a fine example of late nineties fantasy, it was written for people who didn’t have the distractions we have today. Sure, phones had the internet back then but it didn’t intrude on life like it does now.

Now, I get withdrawal if I can’t stream something in the background at all times.

It’s not a bad series. It’s very much like a gritty reboot of The Lord of the Rings. Or a tame version of Dune. And it is perfect for someone looking to dive into something that consumes their free time.

But, it’s not something I can read to relax. I don’t want a complex, decades-long experience of following a series I don’t know will have an end.

A good book for me today is one with six characters, 300 pages, and a beginning, middle, and end.

Which has not been true for me in the past. After all, I spent 20 years reading Robin Hobb’s Farseer books, which began with Assassin’s Apprentice. Although, I think they are a masterwork by the best living fantasy author alive.

Also, she wrote 15 books in that time as opposed to six.

What People Thought of Game of Thrones When It Came Out:

It was a bit mixed. Some people thought it was childish while others thought it was masterful. But, most agreed that given the author’s past releases, it would likely never have a conclusion.

A review from The Guardian by Sam Jordison called it:

That is unfair. It’s crude and violent, often graphically, but not stupid.

“A vast, rich saga, with splendid characters and an intricate plot flawlessly articulated against a backdrop of real depth and texture. Still, after 672 dense pages, were you expecting a satisfying resolution? You won’t get it: Be prepared for a lengthy series with an indefinitely deferred conclusion.”

Conclusions, That’s What I Want

I think that’s what I craved – an ending. Some satisfaction.

The TV show is delivering on this currently. We can expect to see the conclusion days from now on TV.

This happens often in Japan where TV outpaces the original material. It’s a relatively unprecedented thing for a Western show. After all, we waited for Tolkien to die before we made the Lord of the Rings movies.

As of now Game of Thrones exists in a space where you can’t argue if the books are better than the TV show. At this point it feels like the show became the source material and Martin’s books are an afterthought adaptation.

It’s A Matter Of Time

When I think about all this, it shows me that there really is such a vast spectrum of what can make a book good to a person.

I think our tastes age with us. I might grow into A Song of Ice and Fire again as I grow old and have more time.

However, what if the generations now too young to remember a time before eBooks and light novels simply don’t want to spend the time on stories that don’t come in short monthly instalments?

It keeps me up at night.

It may well be worth your time to consider who has the time to read your fiction before writing that thousand-pager.

by Christopher Luke Dean (slowly becoming distant from himself).