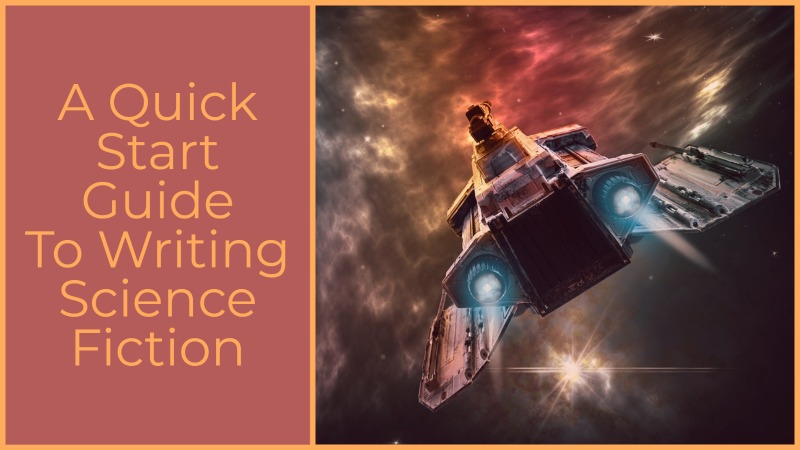 In this post, we’ve included a quick start guide to writing science fiction.

Science Fiction (SF/Sci-Fi) is big business today and the following is a list of staples and standards that can help you make good science fiction at an industrial rate.

1. Use a Gimmick– What Sets Your Story Apart?

It must be science based! It doesn’t have to make real world sense, but it must revolve around the ideas that popular science believes in.

These include natural things such as gravity and light, or manmade systems like research laboratories.

These will ‘produce’ your gimmick, and with this you will use the gimmick as a centre piece for your plot and characters to revolve around.

Star Trek has warp drive, Star Gate has wormholes (i.e. the Star Gate), and The Expanse has proto-molecules.

These shows use these gimmicks and various levels of ‘science’ terminology to explain away why they can do seemingly impossible things like fly between stars, or have magic blue aliens that can survive in the cold depths of space (stop telling me The Expanse is realistic please).

Use the giant robots from Gundam and the monsters from another universe like Star Trek: Voyager and you have a concept for a movie.

Don’t believe me? Have you watched Pacific Rim?

2. Include The Trappings Of Sci-Fi

The future is often invoked in Science Fiction. This often means having high levels of technology everywhere.

These trappings will build the tone of your work and tell the reader how to feel about the world.

It will show just how similar or different the world is to our own.

The Expanse mostly uses existing space technology and logic. That is, no artificial gravity, bad food, and poor health caused by long stints in space. Which is why people believe it is realistic despite the bright blue space magic…

On the other hand, Star Trek has luxurious ships with magical holographic recreation suites, and replicators that can create any fine dining experience. They also can seemingly cure any illness given a 45 minute episode.

Time Saver: Decide how hard you want your characters to have it.

Only then decide how much ‘quality of life’ technology you want to include in your story. ‘Quality of Life Technology’ is also known as ‘Technobabble Tech’ or ‘Hand Waveium’. Is it functionally magic? For example, beaming up people in a flash of light. Just nonsense as far as real science is concerned, but nevertheless based on something that is sort of real.

Fans will pick it apart if you create technology that can solve any problem, but don’t use it as part of your plot.

That is why star ship crews are so often stranded on planets when the writers don’t want to deal with technological magic solutions to a plot point.

2. Use real world problems but don’t make them specific.

If you want to talk about racism or poverty, use aliens in a resource war as your metaphor.

If you are too direct or obvious it stops being Science Fiction and is just a satire of modern society. Which is a different genre altogether.

This also makes some of your audience less receptive and so you will have a much reduced reader/viewer base.

But, if you cloak it in metaphor and allegory, even people who disagree with what you are saying might watch and enjoy it. And, who knows? Even change their minds.

Read: A Complete Glossary Of Terms For Science Fiction Writers

What should a Science Fiction future look like? How does it feel?

It can be a bright future. With well-off healthy people and good developments. Star Trek.

It can be a dark dreadful future. Where the rich abuse the poor and horde technology for themselves. Dune.

But, once you have made that choice then describe the world accordingly.

Star Trek is always well lit and clean. People walk into sick bay with a broken arm and go back to their tennis game 15 minutes later.

Dune is often dim and dirty. Dune goes to great lengths to dwell on smells, grime, and daily suffering.

Dune uses Tsarist Russia for the evil faction. They are brutal, unjust, and don’t care about exploiting their people so long as they stay in power. Therefore things are rough, rundown, and dirty.

The nobles are the kind of vicious men that can survive this high stress life. The people are starved and not allowed to use any technology. While the warrior classes are treated better but still harshly.

Science Fiction is about a plot that revolves around the science gimmick.

The point being, if you are telling a story about Star Gates and you don’t mention a Star Gate, then it’s not a Science Fiction plot. It’s just a plot that you dressed up as Science Fiction that would be happier in another genre.

Both work well in Sci-Fi.

But just know what you are getting yourself into.

Foundation is too complicated to exist in any other genre. It is a multi-generational galaxy-spanning mess that is only read by people interested in high minded concepts.

If you want to do this, fine. Almost nobody will read it except perhaps me, but only if there is an audiobook version.

On the other hand, shows like Dark Matter, Star Gate, or Far Scape are about going to a place, shooting the bad guys, and saving the day. And, they are often hugely popular.

Just know what you are after.

5. Think About The Characters

Character should reflect your world and fit into it. They should be formed by it but also comfortable in it.

They should not simply be a person for our world in a strange setting. Unless that is what you are purposefully trying to write.

A weird book, Ring World by Larry Niven, has a 200-year-old main character. He is eccentric and impulsive and bored with life having lived so long.

Science Fiction allows us to explain how our characters can be exceptional in ways that we just have to hand wave in normal fiction.

Use this Sci-Fi toolbox and have fun explaining why your characters are the way they are.

After all, it’s why your audience is there.

They want to experience the fun and creativity that comes with advanced wacky technology.

They want to know why the aliens behave in silly ways or why people wear velour uniforms in Starfleet.

Pick all the improbable characteristics that your characters have. Then make a brainstorming sheet that can explain each one of them and see if they fit your world.

If they don’t, change the character or the reason why they are that way.

If that fails, adjust the plot to better suit your character if you can’t bear to change them.

There is generally just one in a Science Fiction TV episode.

But, books like Dune can have dozens. Please don’t do this, but it has happened.

They are almost always just there to add some world building in Sci-Fi.

So, you can just remove them until you only have sub-plots that directly affect the main plot.

Far Scape does this well by only having five or six characters, but all of them are main characters. If they want to do a sub-plot they split them up and then integrate them back into the main plot later. This means they never have to worry about going off track completely.

Time Saver: Don’t have any.

Your main plot should do all the heavy lifting in terms of world building. This is because the world should directly affect your protagonist.

7. Have A Get Out Of Jail Free Card

Most of these shows and books have a deus ex machina object or person that can solve most problems.

It comes at great cost so people are reluctant to use it.

But, when you have written yourself into a corner, it’s handy to have it lying about.

They can fix any problem but won’t do it because they don’t like to interfere in mortal/lower beings affairs. Or they might just not care. We are like ants to them.

So, the trick to using them is to convince them to act. That is the cost.

It’s actually quite clever because it means that the Magical-Solve-All™ is not controlled by the protagonists in any way.

A perfect get out of jail free card for any author who wants one, but does not want to always be thinking about how not to use it.

I hope this quick start guide to writing Science Fiction helps you get started on your book or script.

Have fun going boldly where few have gone before.

After all, if you are having fun writing, then the reader will have fun reading!

by Christopher Luke Dean (Who doesn’t ever really stop thinking about dragons.)