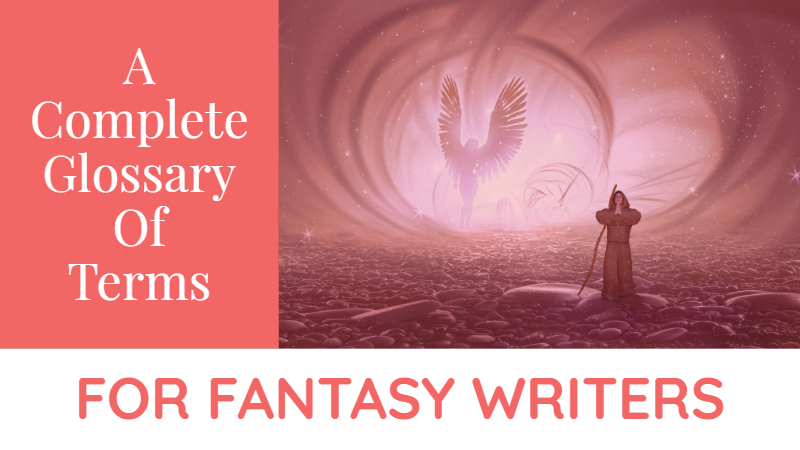 If you’re going to write in the fantasy genre, read this post. You will love this complete glossary of terms for fantasy writers.

To write a good Fantasy book, you need to know all the tropes in the genre and you need to come up with a great idea. You need to know the four pillars of fantasy as well. But, you still need to include all the elements of a good book.

These elements include the following characters:

As well as a plot, a setting, and story goals for your characters.

A Note About Setting

Setting is important in the Fantasy genre. Your audience is here for your world-building. The vast majority of Fantasy readers expect a certain tone to the setting.

Fantasy is a more general topic than, say, science fiction. For example, science fiction includes Star Wars and Star Trek, but not Lord Of The Rings, but fantasy can include all three. Although, don’t let a Trekkie hear you say that after a few Romulan ales.

Fantasy can include any setting that is imagined. It can be a futuristic setting or a medieval one. It can even be almost exactly the world we live in.

It simply has to have something fantastical about it. Like magic, or the Force or humans travelling peacefully through the stars. So long as there is an element of the unbelievable, it’s a fantasy.

However, I will be talking about the classic, medieval variety of fantasy in this post.

[Top Tip: Learn how to write fantasy with The Fantasy Workbook]

These are all the important words and phrases you need to know to write a Fantasy book, short story, script, or game.

I hope this is helpful and informative. Why not tell us what I have left out in the comments?