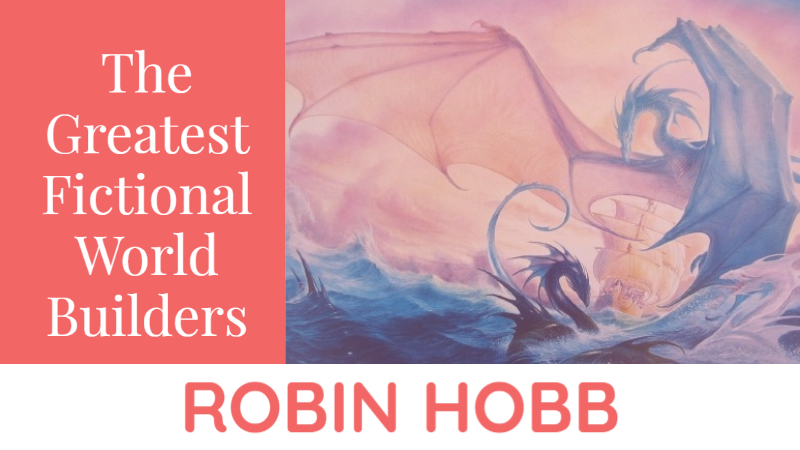 Welcome to the third post in my greatest fictional world builders series. This series is a reference and a resource for writers who are building their own worlds.

(Look out for the next post in the series. Sign up for our newsletter to get our Daily Writing Links, and you won’t miss out.)

I started with Terry Pratchett and J.R.R. Tolkien. In this post I will write about Robin Hobb.

Robin Hobb, born 5 march 1952, is an American writer of fantasy fiction. She is the author of The Farseer Trilogy, The Liveship Traders Trilogy, and the Tawny Man Trilogy. Robin Hobb (who also writes as Megan Lindholm) continues to be the undisputed master of the modern Epic Fantasy. She has written 16 novels in her main series and a dozen other books over the course of 35 years.

Her worlds are complex and interesting, and exist as a perfect complement to her characters.

In fantasy, people are often saving the world, but I never really care about the world being saved. So long as the characters live, I am happy.

Robin Hobb changed this for me.

Hobb manages to make her readers care for her setting as much as her characters. So much so that you’ll be genuinely concerned about the residents of Bing Town and wish you could call the guards to save the people of Badgerlock Manner.

If you can read Fool’s Assassin and not feel like someone has destroyed your childhood home at the end of it, you might need help.

She is a fantasy novelist who writes mostly about magic and the people it affects. She is well-known for her love of nature and animals, which is evident in her works.

Her Farseer series is her most well-known and, I think, her best work.

Unlike Tolkien or Brandon Sanderson, Robin Hobb has created a number of small intimate settings centred around her characters. Sometimes, they are quite grand settings, but they are always intimate.

Fitz, her most well-known character, is always written in first person. This can be problematic from a world building perspective because he has to experience every part of the world for the reader to understand it.

It makes learning information a slow, but natural process. It can be frustrating at times as the reader can feel starved for information, but it gives her world an organic feeling.

She also loves the supernatural. Hobb’s Farseer world is one where magic is weaker than it was in the past and much has been forgotten due to a calamity in the past.

But, unlike Tolkien or other fantasy authors, Hobb is willing to show that this was not something that humans would accept.

Can you imagine giving up magic? It would be like saying electricity is overrated and we should go back to washing clothes by hand.

Her characters act like humans and progress towards a goal of rebuilding what they have lost and, hopefully, going beyond that.

So, her characters go about relearning and eventually find that the thing that is missing from their world is dragons. Something no fantasy world can ever be without.

Dragons as the source of magic is not new to fantasy, but it has never been done as well as in Hobb’s works.

In addition to Dragon Magic she is also fond of nature magic. She often has a character based around this in her series, like her Shaman from The Reindeer People.

She had time to think when she worked as a waitress in the beginning of her career. She was also alone for long periods as her husband was often at sea.

Hobb grew up in California and Alaska in the fifties and sixties. Spending a lot of time outdoors, or at least in wild places, and living on a farm, she seems fond of nature.

Wolves and other more magical creatures are prominent characters in her books. Her character Nighteyes, a wolf, is in many ways the co-lead of her Assassin series of books. Hobb makes this non-human character come alive in a very realistic way.

Nighteyes is so real that it is easier to empathise with him than Fitz, her human lead, most of the time.

These touches of nature greatly influence her worlds. In the Solider Son Series of novels an industrial nation has conquered a magic kingdom and is beginning to encroach on a magical forest. This forest is a place where magic and wonder have held progress at bay for an eternity.

What stands out about this series is that it is not a commentary of nature versus man. Nature is an elemental force in her works. It is something that fights back. Often it loses but it always takes something from the conquerors in the process. Nobody returns whole from their journey in this series.

Robin Hobb is a strong believer in having a plan for your story. She says she never starts a book unless she knows how it is going to end. This gives her a goal to aim for as well a structure to adhere to.

She says: “You need to know the ending even if you don’t know how to get there.”

She says not having this basic goal means that most people get 200 pages into a story and have no idea how to end it.

Having these goals also give purpose to her characters. She says that she knows when she is wasting her time on something because it’s not helping her character reach their goal.

But, she does not have a strict outline. She leaves room for characters to “wander in” and makes changes if she thinks it will improve the book. For example, the fool only had one line in her outline for the Farseer books. Arguably, he is now the main thread throughout her entire series.

In her main series she implies a symbiosis between dragons and people. Well, more than implies. She states that the run down and chaotic nature of the world is due to dragons having gone almost extinct.

This is a lovely take on the magical beast trope. It put dragons in their place at the top on the food chain.

But, not in the sense that they are mindless monsters wanting to destroy humans. Hobb’s view of dragons is that they are the real people of her world. They are the driving force for humans to be better than they are.

They show humans that they can be better and they demand that humans get better.

A dragon in Hobb’s world takes humans it likes and makes them pets in the same way we would have a cat. The dragon does not bend its will to accommodate human nonsense and is often as uncaring about our problems as we would be if our pet got worked up at a passing dog.

A dragon might not care if their human was scared by something as trivial as an invading army. Just as you don’t care that your dog is barking at something happening two houses away.

But she shows that it is not just a one-way love. A dragon could easily take offence at someone trying to hurt their beloved pet. They would think nothing of raising a city to the ground if its ruler so much as insulted their pet.

She says: “There was no discouraging me. Writing is partially an obsession or a compulsion. People who are meant to do it are going to do it whether they are published or not.”

Hobb was one of those children who could not help but write. She did this from an early age, but thought she would probably be a children’s author, especially after her children were born.

However, after ten years as “an author who couldn’t quit her day job”, she began work on the Fitz books. Her editor suggested she change her name due to the edginess of the character and to suit the darker tone.

So she picked Robin Hobb, because it was androgynous and it fit well on a dust jacket.

This marked her entry into epic fantasy.

Hobb believed that she was done with Fitz after her third book. So, she started a new series in the same world with new characters. She believed that if she wrote for long enough that these books might end up joining together into one cohesive story.

They did – over the course of 25 years. She produced 2.5 feet of books in this world. That’s one and a half bookshelves or 16 novels for the layman.

As these books grew, it became clear that this world had one simple arc. Bring dragons back to life.

In the end, it was just something she could not help but do. Some people have to write, even if it takes them 25 years to finish their story.

It is interesting to note that Hobb, Robert Jordan, Terry Pratchett, and George RR Martin all started writing seriously in the 1980s. This might say something about the publishing industry in that era, that something was changing to make way for more serious fantasy stories.

She produced her books in the most prosperous time in American history. Even though they are tinged with regret and loss they do not ever devolve into the kind of fiction written by people who have seen the edge of civilisation first hand.

There is no sense of Tolkien-esque despair or the depression that covers Robert Jordan’s and Sanderson’s books. But, they are not as optimistic as Terry Pratchett’s books.

Her worlds are progressive and moving towards betterment. Slowly, and in a brutal sort of way at times, but things get better and better. When the good guys win, the world is safer. When bad governments fall, better ones take their place.

From a modern perspective it seems fanciful, but it is fantasy.

She wrote her books for anyone who could stand a good story.

In the beginning she had a young audience in mind. However, given her mastery of words and her ability to break the human heart that would have been a waste.

She says her books are made for real people. But, they are not about reality. Her characters always have something to strive for. There is a satisfying change in the story from beginning to end.

Her characters grow or die or get worse. Nothing is stable in Hobb’s world, but she writes with a structure that always feels like things are moving forward.

Frequently, I have been turned off my favourite authors after finding out too much about them. Some authors have awful personalities.

Thankfully, Hobb is a lovely person.

Her books cannot be recommended more strongly. They are essential to any person aiming to write good fantasy because they will give you an upper limit of good writing to aim for.

by Christopher Luke Dean (Sparing a moment’s thought for the plight of Treehung in these modern times.)