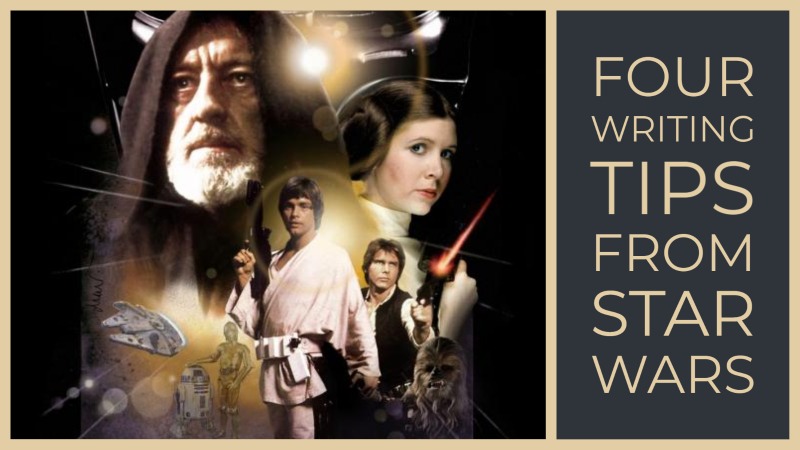 Are you a Star Wars fan? Even if you’re not, you’ll enjoy this post on four things writers can learn from Star Wars.

In celebration of Star Wars Day, this May the Fourth, here are four tips for writers who have watched the Star Wars movies.

[Tip: It is important to remember that Star Wars is not classic science fiction, but is rather a space fantasy.]

1. Use The Hero’s Journey

The Hero’s Journey or the monomyth is Joseph Campbell’s theory about heroic narrative. It comes from his book The Hero with a Thousand Faces and was hugely influential to Gorge Lucas when he was in college.

This tool can be used to structure a work of fiction such that it conforms to the expectations people have for heroic myths.

This is why stories like Star Wars feel so classic. They are grounded in a style that has been with us since the Arthurian myths.

The rule of two is a classic trick authors use to introduce characters to an audience that makes them easy to remember.

Star Wars creator, George Lucas seems to have picked it up from Kurasawa the famous Japanese director.

The theory is that if you have to introduce a bunch of characters it is better to do it in pairs. R2D2 and C3PO, and Han and Chewy are introduced in this way. Luke and Obi-Wan, and Vader and Tarkin form their own pairs.

This is a quick and effective way to make sure that the audience knows where characters stand and what to expect of them.

3. Be Realistic But Fantastic

Star Wars is a space opera and the issue with space is that almost nobody has any idea about what it is really like.

More often than not it is treated in a way that makes it off-putting to most people. For example, some space TV and movies are too intellectual and weird for a general audience. 2001: A Space Odyssey is boring and long and the plot goes nowhere. The only people who watch it now are film students as a traditional punishment in first year.

But, Star Wars is fun and has space ships that look like you could fix them with a wrench. It is the kind of world that looks fun to live in but also dangerous and wild.

Unlike, Star Trek nobody in Star Wars explains any technology because it is just part of the adventure. It is just as much a fantasy as the Space Wizards and their Laser Swords.

4. Create An Everyman Who Isn’t Like Every Other Man

Sure, Luke is a classic everyman. It is easy to see yourself in his position, and that is all that is required for the trope to work.

But, he’s not bland. He’s actually kind of crazy and reckless. He decides to go on a magic space quest to find a princess moments after seeing his Aunt and Uncle burnt to death. Then he proceeds to do the most careless things one after the other in a blatant disregard for logic.

It’s like watching a surrealist play if you think about the events of the movies too deeply. At every turn, Luke makes the obvious wrong choice and is usually rewarded for it. Often with a medal.

By contrast, a normal Everyman is someone like Arthur Dent from The Hitchhiker’s Guide to the Galaxy. He’s just an ordinary man going about his ordinary life. That is to say a person that basically has no personality to speak of to whom the world happens.

Luke, by contrast, is always the catalyst of his own destiny at least up until Episode VIII.

Even if you are not a screenwriter, there is a whole world of Star Wars books you could be writing for.

Now this may surprise you. It even surprised the president of Lucasfilm, Kathleen Kennedy, who said: ‘Every one of these movies is a particularly hard nut to crack,’ said Kennedy. ‘There’s no source material. We don’t have comic books. We don’t have 800-page novels, we don’t have anything other than passionate storytellers who get together and talk about what the next iteration might be. We go through a really normal development process that everybody else does.’ ~Rolling Stone 2019

Well, I don’t think she and I could be friends after a statement like this.

To put it into perspective, when she took over from George Lucas, there were about 200 novels already published by Lucasfilm, as well as hundreds if not thousands of comics. It was basically all that kept Dark Horse publishers afloat in the 90s and 2000s.

And, well, Lucasfilm has published about 50 novels under Kennedy’s own watch. One assumes she’s the kind of boss who signs documents on the golf course.

Staggering incompetence aside, many of these books that don’t count were actually excellent. And, surprisingly most of the ones I really like were published after Kennedy took over.

Here are some I recommend, with writing tips from each book:

The Last Word On A New Hope

I love Star Wars. To me it is a comfortable refuge from the world.

As a writer, I appreciate that I can learn from its greatness and from the depths of it failings.

If you love Star Wars, or feel disappointed by it, or even just want to know more about your favourite characters, know that we are now being graced with some excellent, simple, and well-thought-out writing from the people who brought us The Mandalorian.

Must-read: What Writers Can Learn From The Mandalorian

Hopefully, Star Wars is on track again to bring joy and light to the old and young of us again like it did once upon a time in a galaxy far far away.

That is what this silly day is all about. It’s a ‘celebration’ of things we like and a begrudging acknowledgment of things that were not as well received.

There is still a little bit of light in it, yet.

You don’t let the past die, you don’t kill it, even if you think you have to. Star Wars is a precious miracle and a delightful disaster more often than not. Those of us that have watched The Star Wars Holiday Special know how bad it can get and yet we are still here.

Why? Well, because something taught us that no matter how dark the times no matter how toxic, conceited, and overwhelming the situation, we know even a farm boy, who likes his sister a bit too much, can topple the evil empire.

And, you know, it’s not such a silly day to some people, especially not to those who remember the epic lightsaber fights they had in the backyard with a couple of broken brooms.

Written by Christopher Luke Dean (May the fourth be with you and take it easy come the Revenge of the Fifth.)