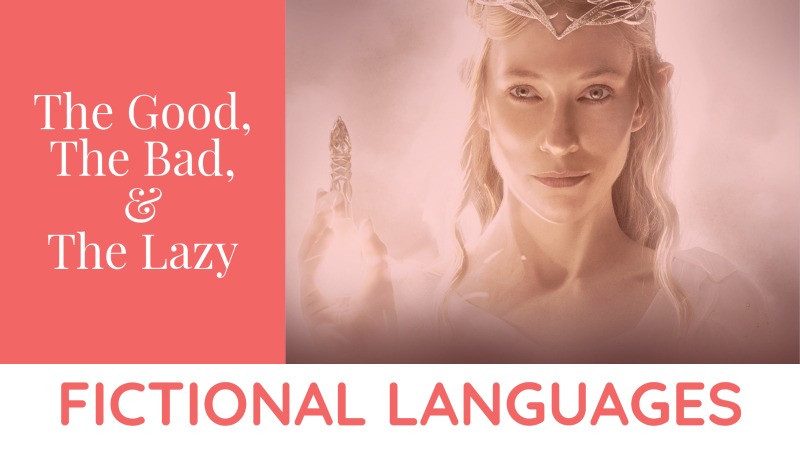 Fictional Languages: The Good, The Bad, & The Lazy

In this post, we look at fictional languages. We discuss the good, the bad, and the lazy. We include explanations and examples as well.

I love it when authors take the time to think about how people speak. Accents and dialects are so often neglected in books, television, and movies. You’d be forgiven for being turned off by a sci-fi series where every alien has the same Californian accent when it is supposed to be a realistic representation of the future.

So, when an author takes the time to create or to fake the creating of a language, it can be a real treat.

I will look at creating these languages in a future article, but here are a few example of my favourite good, bad, and lazy fake languages.

Fictional Languages: The Good, The Bad, & The Lazy

Some authors spend real time and effort on fictional languages. They treat them like living entities with a history and it shows.

Elvish comes from The Lord of the Rings.

From J R R Tolkien’s fantasy works, we get the Elven Language which of course is Elvish as it relates to the elfin tongue of the elves, but not to the language of elfs. Confused? Let me explain.

Before Tolkien, we used to say elf and elfs, and they were elf-like and spoke Elfish.

Tolkien took issue with this as it did not agree with his understanding of Old Norse and Old English. So, he changed how 500 million people speak and write by making a book language for The Lord of the Rings. Have a look at the materials published with the books that explain his well-thought-out and thoroughly researched proto-Norse Elven languages.

Today, we mostly say Elves and Elven swords and the Elvish languages, because Tolkien made several. But, if you play a lot of games, you might also say the Elven language popularised by Dungeons & Dragons.

But, most people don’t use an ‘f’ except for the singular form of elf and all because Tolkien did such a good and believable job with this fictional language. People who read his books started using his spelling and pronunciation.

He also made sure to give his languages names in their own language. For example, Elvish can be called ‘Quenya’. This is a simple thing to do, but most writers forget to do it.

Often, they just give the language of a people the same name as the place they live.

At least the Klingons spoke Klingonese although most people say Klingon. Granted this a dumb name, but it has precedent. We do this in English with languages we don’t have close ties with.

Notice how we say Chinese even though we could say Mandarin or Cantonese, or even use the native word for the language like Nihon-go(日本語) for Japanese, but we don’t because people use the name for other languages that come from their own language.

However, Klingon or Klingonese evolved over time and by the time The Next Generation was filming, enthusiastic fans were already learning it and making it make sense.

They gave it grammar and an alphabet. They made pronunciation guides and syllabic pairing structures. They made tenses and gave it gender. (Linguists might be interested in this article on Klingon)

By the time the Klingons were featured in Deep Space Nine, there was a full, living language bigger perhaps than some dialects of French and English. Hundreds of thousands of Klingon Dictionaries were sold.

The producers of Star Trek could have ignored this and simply continued to make the nonsense words that Klingon started off as, but they embraced this. They brought ‘experts’ on to the show and taught the actors how to speak a few lines here and there.

It was so successful that people now use Klingon as an example language of what to look for in a well-thought-out Sci-fi language. See I just did.

I don’t dislike all the languages in this category. They are here because they either don’t cut it as a language or because they were not taken seriously.

This is the fictional language of the Jaffa people from the Stargate universe.

Sadly, for a series that took so much time and effort to take an expert in history and languages on dangerous missions, this language attempt is just pathetic.

After the first few episodes of the show, all attempts to make aliens speak alien languages is dropped and the Jaffa are reduced to the four or five vaguely Germanic sounding words for the rest of their 10-year run on the show.

It seems there was no guide for writers in this series, so use is sporadic and contradictory. The actors were also not given any coaching on how to pronounce the words and they change from scene to scene.

I love this show, but even they knew they weren’t taking the language seriously when they mocked it with this quote:

‘What the hell does ‘kree’ mean?’
‘Well, actually, it means a lot of things. Loosely translated it means ‘Attention’, ‘Listen up’, ‘Concentrate’.’
‘’Yoo-hoo’?’
‘Yes, in a manner of speaking.’
―Jack O’Neill and Daniel Jackson

To make it worse, the writers decided that Jaffa was just a form of Goa’uld (the bad aliens of the Stargate universe), presumably so that they would not have to make up different words.

Luckily Stargate was never a realistic setting, but, if it had been, disregarding these details and not having a clear idea of what the language should be, would hurt my immersion in this world.

This is the fictional language of the Klingon species and their Empire.

Like Jaffa, nobody was trying to make Klingon into a real language at first. It was just a few words from a cast of minor characters in the original Star Trek series.

However, over the course of the decades and due to the popularity of the later movies and series, this would all change.

Klingon is a perfect example of how you can fix a bad fictional language over time. (See DS9 Klingon above.)

To start off, it was just a few mumbled words made to sound vaguely alien but confined to a strictly North American pronunciation guide.

This is a real problem with fictional languages – that most made-up languages are just a re-skin of English. They have six vowels sounds, 26 letters, and use the same grammar as English.

At best, this is a time-saving tool for the writer. At worst, it shows a blatant disregard and ignorance that languages could be structured differently. Think of how Cantonese has seven tones for each syllable compared to a relatively flat language like English where we stretch our words, but don’t raise or lower their tone.

Sometimes, you don’t need a whole language. Sometimes, you just need a few words or a concept to make a scene work. So, what do you do when it doesn’t make sense to spend the time of drafting a whole new language?

In the Golden Era of late ’90s and early 2000s Sci-Fi TV, Farscape was a cult hit. It was a low budget show made in Australia.

But, rather than just hand waving away the fact that the galaxy only spoke Australian English, the writers got around it creatively.

They explained it in one scene. John Crichton, our Human, steps onto the bridge and is confronted with two aliens shouting at each other in harsh, for the one, and clipped, for the other, tones. The words are of course nonsense, but it is so short that you can’t tell.

Then he is injected with ‘nano-bots’ that translate the words for his brain. From then on they simply speak English.

It is a short scene and, like many sci-fi tropes, it has been copied a million times and still holds up today.

What is fascinating is that the ‘Nano-bots’ don’t work on all words. This gives the writers an excuse to write in space swearwords and slang.

This means that the writers can have fun and write thing like, ‘This was a frelling drad show and the characters could swear like fahrbot Yotzes all day long.’

It was a good show. Not like some of this other dren.

Arthur Machen created the language of secrets and madness in his story, ‘The White People’. It was popularised by H.P. Lovecraft in The Dunwich Horror.

It seems to be a language used by occult forces to drive the human mind mad.

But the issue is that you can’t make a real language that is insane or that makes people go mad.

Languages are about rules and precedent, and are policed (especially by the French) by those that speak them. We make fun of bad pronunciation. We have unspoken rules even for slang and jargon.

This is a language that you cannot expect people to think too deeply about, because it falls apart too easily. Some RPG games like Pathfinder do use it to a small degree by ignoring what was actually intended by Machen and Lovecraft. They just treat it like any other fictional language.

Often, you hear of it being spoken by cultists and otherworldly monsters. Also, in games.

A cool, lazy idea is to let your community create the language. Obviously you need a following to do this. The people behind the short, fan-funded series Journey Quest did.

Fans of these artists even donated money to the show in order to have a word of their own devising put into the ‘Orcish Dictionary’.

This led to a fun scene where one of the characters makes fun of another orc’s grammar saying something like he should use ‘is’ and not ‘be’ in this context because it was just basic grammar.

It was fun and relatively easy. The community also has a built-in interest in the language, so they love it when there is a scene in Orcish.

Sometimes it pays, quite literally, to ‘let the fans decide’.

These are just a few of the many examples of fictional languages out there. I’m sure you have your favourites, so please leave a comment below in High Valarian or Hutese or any other language I have missed out.

Image: The Lord of the Rings trilogy.