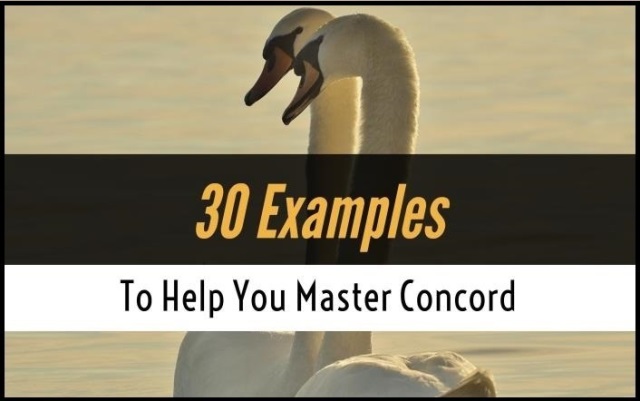 What is concord in writing? We have put together this list of 30 examples to help you master concord.

When we use the word ‘concord’ in everyday speech, it means ‘agreement or harmony between people or groups’ (Oxford Dictionary).

When we use the word in the context of grammar, it has a similar meaning: grammatical agreement between two parts of a sentence.

An important language skill to master is subject-verb concord.

The Basics Of Concord

Look at these examples.

Number 2 is correct, because the subject, ‘pages’, and the verb, ‘are’, are both plural. They agree.

A phrase in between the subject and the verb

The temptation here is to look at the word in front of the verb (the plural ‘lines’) and choose the verb that agrees with it (the plural ‘are’). This is wrong. The subject of the sentence is not ‘lines’. It’s ‘message’. So, because the subject, ‘message’, is singular, we use the singular verb ‘is’. The phrase ‘between the lines’ is a prepositional phrase (starting with a preposition), which is why it’s not the subject of the sentence.

Try your hand at these:

The correct answer is number 6. ‘Case’ is singular, so use the singular verb ‘is’.

The correct answer is number 7. ‘Sentiment’ is singular, and the singular verb ‘is’ agrees with it.

If you have two singular subjects that are connected by either/or, or neither/nor, use the singular verb. Look at this:

9. Neither Sibongile nor Ted has the keys to the stationery cupboard.
10. Either Mary or Shandu is manning the info desk at the conference.

Even though you’re discussing two people, only one of them (singular) is taking action, so the verb is singular.

What do you do when one of the subjects is plural and the other isn’t? Look at these examples:

11. Neither Sibongile (singular) nor the personal assistants (plural) have the keys to the stationery cupboard.
12. Either the stewards (plural) or Mary (singular) is manning the info desk at the conference.

Do you see how the verb agrees with the subject closest to it? However, the second sentence sounds awkward, so rather write sentences like this with the second subject being plural, and then make the verb plural. Sentence number 12 should rather be rewritten as:

13. Either Mary or the stewards are manning the info desk at the conference.

Two subjects connected by ‘and’

When you have two subjects connected by ‘and’, use the plural form of the verb.

14. Tshepiso and Sbo are responsible for the exchange server.
15. Elize and Raveshan are our new project managers.

There are two exceptions to the rule. The first (see number 13) is when a compound subject connected with ‘and’ is seen as a singular subject due to popular use. The second is when the subjects connected by ‘and’ are the same person or entity (see number 14).

16. Pap and wors is my favourite meal.
17. The creator and distributor of the software is Energesix Ltd.

Use a singular verb when you have a subject that conveys a single unit of distance, time, or money.

18. Ninety-five cents is a great bargain for a SIM card.
19. One hundred kilometres is a gruelling daily commute.
20. Twenty minutes is all I have to prepare for the meeting.

Other subjects that call for singular verbs

The following words need singular verbs: each, everyone, everybody, anyone, anybody, somebody, nobody, someone, none, and no-one. Look at these examples:

21. Each of our staff members has to fill in an evaluation form.
22. Anyone who wants a day off in lieu of overtime must still fill out a leave form.
23. Someone has left a coffee cup on the glass of the photocopy machine.
24. None of us wants to admit to being behind on filing.

Subjects that are collective nouns

25. The board wants to make the decision by next Thursday.
26. The staff is in a meeting.
27. The team is due to fly out today.

The board, staff, and team are made up of many individual members, but each forms a collective, singular subject. Thus, a singular verb is used. Be careful not to make this mistake, though:

28. The staff is in a meeting to discuss their appraisals.

Now, you have a singular subject (staff), a singular verb (is), and a plural pronoun (their) in the same sentence. To improve concord, rather rewrite the sentence in one of the following ways:

We hope these examples to help you master concord help you with your writing!