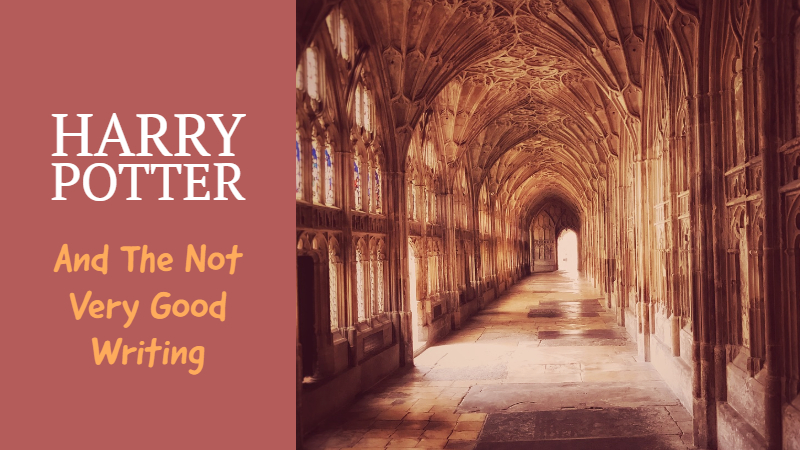 In this post, Harry Potter And The Not Very Good Writing, our blogger looks at the writing of one of the most popular authors of all time.

Now, now, Potterheads. Put down your wands. I’m warded against your curses anyway. I don’t want to bash your fandom – just explore the not very good writing as the series progressed.

I love Star Wars, but George Lucas is a poor filmmaker. He’s not Rian [pronounced Ryan] Johnson [1] bad, but, there, I said it: Sometimes, something I love isn’t always very good.

“But why must you ruin my childhood, you … you dabbler in the dark arts!” Harry Potter fans scream into the void.

Well, I say, I liked the Harry Potter books too, and I mostly still do. I re-read the first Harry Potter, you know, Harry Potter and the Regionally Dependant Title, not long ago.

I thought, let’s see what made this such a good children’s book. So, I went to my bookshelves and rooted around, then remembered I’m 30 and sold those books along with my piles of Animorphs 12 years ago. Don’t worry, I still kept all my Asterix books. I’m not heartless.

So, I downloaded it to my iPad and began reading. I thoroughly enjoyed it, and I thought, let’s keep going. And boy was that a mistake.

Most writers improve with age.

Harry Potter And The Not Very Good Writing

J.K. Rowling is getting worse – and this is why:

Children’s books should be a light read with action and adventure to stimulate a young mind. Sure, they can be dark or tragic, but not 766 pages long. The first Harry Potter

is 223 pages, you can read it in an afternoon. There are 13 chapters or so. It’s a good size. After that, the books ballooned.

The Lord of the Rings is only 1 004 pages and they publish that in three volumes. Harry Potter is the adventures of a teenager going through magical puberty. It also occasionally features an incompetent dark wizard who I believe is killed three times by children?

The Lord of the Rings is a metaphorical trek through the horrors of a World War I battlefield. It is filled with loss, regret, and the gradual defeat that all living things go through. It’s not everyone’s cup of tea, but it’s long for a calculated reason. If you don’t believe me look at The Hobbit, a lighthearted children’s tale that would lifts the spirits of the grumpiest father reading to his little ones.

[Suggested reading: Word Counts – How Long Should Your Novel Be?]

Some of us are under the impression that world-building is simply adding more stuff to a story.

What is the point of Quidditch? It seems to eat up pages and pages of these books with flowery action scenes that serve mostly to stall for time so the plot can catch up.

Meanwhile, 1984, not a children’s book I grant you, has two main characters and a love interest. The first is the protagonist, the second is the antagonist, and the third is the reason he’s caught and tortured to the point of insanity. All have a clear reason for existing.

Every scene of this book serves to show the bleak nature of this world or move the plot forward to its twisted last scene. I will never forget Room 101, the Four Lights, or how O’Brien breaks Winston.

On the other hand, Dobby the House Elf makes no meaningful contribution to the plot in four of the six books he’s in, but he’s there for some reason. You get this feeling with a lot of the characters.

Rowling seems to write them and then, several book later, decide: “Well, I guess they should do something while I have them here.” And then she gives them half a scene to chop off a snake’s head, or they tell someone a hitherto unknown thing that Harry needs to know in order to kill Voldermort – again.

3. Description For The Sake Of It

I mentioned Salvatore before. He writes action novels (including The Thousand Orcs: The Hunter’s Blades)

about an elf that periodically goes on a killing spree in new and exciting places. So, he spends some time setting the scene. Tells you some history in a conversation. Gives you an idea of how evil the people his elf is going to murder are.

And then, the battles begin. They are clipped. Edged with sharp words. They describe the hero by how he reacts to the swords and spells coming at him.

Rowling takes a tea break during action scenes to describe what’s happening in the background. Someone casts a spell and then we hear about its flash. How it lights the room. How people react to it being cast. On one occasion she invents a lake during one of these scenes. Then, sometimes, we only find out how it affects the world in the next chapter.

“But, But, Harry Potter Is So Popular!” You Say.

Of course it is. It’s a hugely creative world that allows readers to project their wish-fulfilment fantasies onto the bland main characters. How could that go wrong at a time when nothing else like it was even being written?

It was a trend that protagonists, especially young ones, needed to earn their power and place in the world. It turns out that all people want is to feel special, and simply being told you are the one, a magic hero, right from your birth and here is the magic letter to make it official, is a very appealing proposition to the little tyrants we all were.

Unfortunately, Rowling lost sight of this and I dare say her editor didn’t have the power to stop her. So, gradually, her writing has become sloppy and fat to the point where her screenplays are bloated and confusing. If you can watch the Fantastic Beasts movie and tell me what the function of half the characters were to the plot, I retract every negative thing I’ve said. You were right. Mea culpa.

[1] You know the one who made Luke meditate to death?
[2] Read Hogfather. It’s got the single most perfect speech describing the human condition.

by Christopher Luke Dean. (Christopher has been starting flame wars for the better part of two decades.)

This article has 12 comments