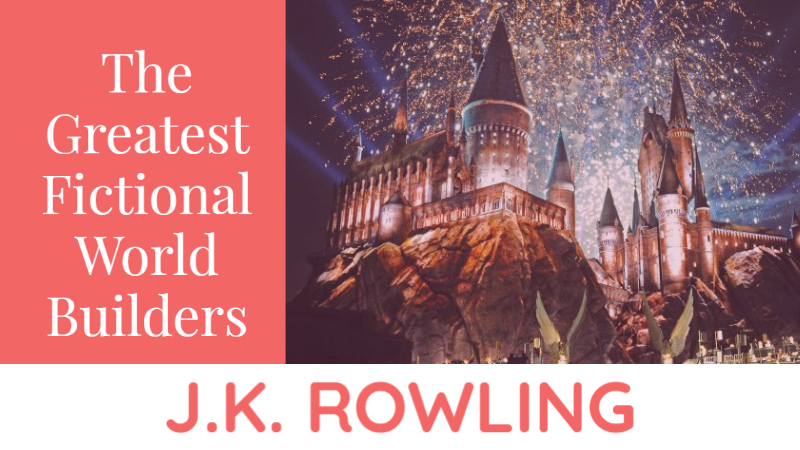 Welcome to the fourth post in my greatest fictional world builders series. This series is a reference and a resource for writers who are building their own worlds.

books, because there is none.

In this article I look at J.K. Rowling (born 31 July 1965) and what made her the most successful children’s author in British history.

We started with Terry Pratchett and J.R.R. Tolkien. In the last post, I looked at Robin Hobb. I decided to balance out Hobb’s serious tone with Rowling’s playful one.

J.K. Rowing is a very good example of an author when it comes to world building. Her reader’s fascination with her world is what carries her books. So much so that, other than Star Wars, it is hard to think of a franchise that is as big and all-consuming as the Wizarding World of Harry Potter.

J.K. Rowling became the first billionaire author. Her Harry Potter series has seven books in total, with several companion books for those who are interested in her world.

Rowling managed to create readers. This is something that had not happened in generations. When her Harry Potter series hit the shelves, it was not uncommon to observe jock-ish children being bullied and pressured, by not just their parents, but other schoolchildren, to read this series.

I recall people getting into fights for spoiling details to slower readers. Honestly, she may be solely responsible for the generation of geeks who are pervasive in today’s society.

Her Harry Potter series has sold 500 million books. It was translated into 80 languages beating The Lord of the Rings by 24 languages. This includes Ancient Greek, Yiddish, and Welsh. It is the second longest work in Ancient Greek. And, are there really any Welsh people who don’t speak English?

Sadly, there is no Klingon version.

Regardless, when your book is a big seller in languages with fewer than 500 000 speakers, the world takes notice.

Rowling has written other books, but none have taken off in a similar fashion.

The Wizarding World of Harry Potter, as it has been coined lately, is a whimsical creation.

Nothing makes sense. Children can revel in this absurdity. What child is not delighted by jelly beans that are literally every flavour? Or chocolate frogs that hop away if you don’t eat them quickly enough?

It has magic football games on broomsticks, love potions, dragons, and evil wizards that are able to be defeated by 13-year-olds.

It has Merlin/Gandalf-like figures who will sit you down after a fight and give you chocolate to make you feel better. It has butterscotch flavoured beer, elves, giants, and unicorns. What’s better is that the protagonist is a normal boy like you! And he has a friend who is a normal girl like you!

As a child, it is easy to project yourself into the world. It is very much like Narnia or the Isekai craze sweeping Japan. These are relatable people living in a fantastical world. It leaves you feeling that anything is possible.

Even adults, with no hope of getting their Hogwarts School acceptance letter, are left feeling refreshed by the books. It feels like this: “Well, at least something magical is happening somewhere to someone, and I am happy for them”.

Hogwarts itself is a perfect creation. It makes no sense logically, but it is a magic school run by people with only the magic equivalent of a 12th grade education. It’s like a third rate university with almost no rules where you can do almost any experiment because nobody knows any better.

It is the ideal environment in which crackpot “professors” and alchemists can run amok. The only better magical institution is The Unseen University from Discworld. Brakebills from The Magicians is a close runner up.

Harry Potter is magical and it is so much the better if it is a little goofy and unrealistic.

Every now and then you hear authors talk about being struck by an idea. Terry Pratchett believed that ideas flew around, bouncing from head to head, until they found one they liked.

While stuck on a delayed train, J.K. Rowling was assaulted by a Billion Dollar Idea. She claims she knew it right there and then, and was desperately holding on to the idea of a little boy wizard until she could get home and write it down.

From that point on, it was just a matter of getting it done.

Rowling said she liked to read books where the author fully understood the world they’d created. So she spent the next five years writing and rewriting the first Harry Potter novel.

She drew pictures of places and characters as befits a children’s book. She wrote histories of organisations. She had 15 or so drafts of a first chapter.

I believe her. The first Harry Potter is a well-structured, well-plotted book with few flaws. It’s short and punchy and a delight to read.

The subsequent books suffer from a lack of editorial control. She does tend to ramble on at times, especially later in the series.

I think this is due to her desire to give everything a backstory. From a world-building perspective this is fantastic, and anyone who is reading for the world must be delighted. But, it does drag the pace to a standstill and introduces inconsistencies throughout the series. I have talked about them before in another article.

Nevertheless, it is great to see an author really show that planning and careful thought can create such a popular series of books.

She wanted to write from an early age. She says she wrote her first story at the age of six.

From then on, she had always been interested in English and Classic stories. She worked as an English teacher abroad and studied French at university. It is clear that she delights in her writing.

But, she also did it to make a living. She was a single mother living off assistance. She was motivated to put out a good book and hopefully make a career out of it.

In between part-time jobs and whenever she had time, she wrote.

A combination of hard times and a love of reading led her to writing as a career. I am sure that most of us are grateful for it.

Her first book was written just before the age of computers. She thought of the concept in 1990 and it was published by 1997.

This was one of the most peaceful times in human history. The Cold War had just ended. The economy was booming. China was being integrated into the world.

This shows in her writing. There is a relentless sense of optimism in Harry Potter that no matter how hopelessly bad a situation seems, there will be a happy ending.

However, she does draw from the events of both the World Wars. Her Death Eaters are the SS of the magic world and Dumbledore’s Army is the French Resistance.

This is nicely balanced by the silliness of the world and the nonsensical nature of all her wizards. Terry Pratchett said a true wizard will argue in the face of danger. In Harry Potter, they will goof off, then actively seek out life-threatening situations.

She wrote for young children. She was raising  a small child on her own and she created her own illustrations. The Snape one is pretty good. It really captures the character.

After her initial success, she felt a lot of pressure to release the books on a schedule. This caused her a lot of stress and eventually her editor allowed her to make her own timetable.

This led to longer and longer books. Some people liked this, but others were put off by it. We can see a decline in sales at this time.

This is probably because of the erratic release schedule and the increasingly darker, more adult nature of the later books. Children who liked the first book may have outgrown the books by the time the last was published, and those who were still quite young might not have liked the tone of the final novels.

It does show us that we should be careful of how we go about writing if we want to retain our audience.

That said, the last book still sold 65 million copies. Many of the most popular authors in the world will never sell this many books in their lifetime.

These are the only works of hers you need to read to understand her world building skills. They are so well-known and relevant that I would be surprised if you are not at least familiar with the basic premise of the series.

These books are about a special boy who discovers he is a wizard, and is destined to save the wizard world from an old, evil, undead wizard.

Fantastic Beasts and Where to Find Them

is a screenplay. It is just a description of various monsters. You don’t have to read this. Watching the movie will give you a much better idea of the world building elements found in Harry Potter. J. K. Rowling is credited as having written a draft of the script.

As with all Hollywood projects, this is to be taken with a pinch of salt.

She has written several other books but they have not found the acclaim of her Harry Potter series and are not essential reading.

J.K. Rowling has shown us that a good idea and an obsessive attention to world building is a clear route to success. Through planning and editing, she produced an exceptional world that had just the right mix of fun, fantasy, and action. It was also not bogged down with realism and logic. She knew who her audience was and she wrote for them without worrying about criticism.

This confidence in the idea is what sold us on her world, as well as her determination to make it work.

J. K. Rowling deserves a lot of credit for what she did for reading. At a time when book sales were on a never-ending decline, she created a world so compelling that it has become part of English culture in a way no other work of fiction can hope to achieve. For this, I am grateful.

by Christopher Luke Dean (5’8” with a French cappuccino core.)