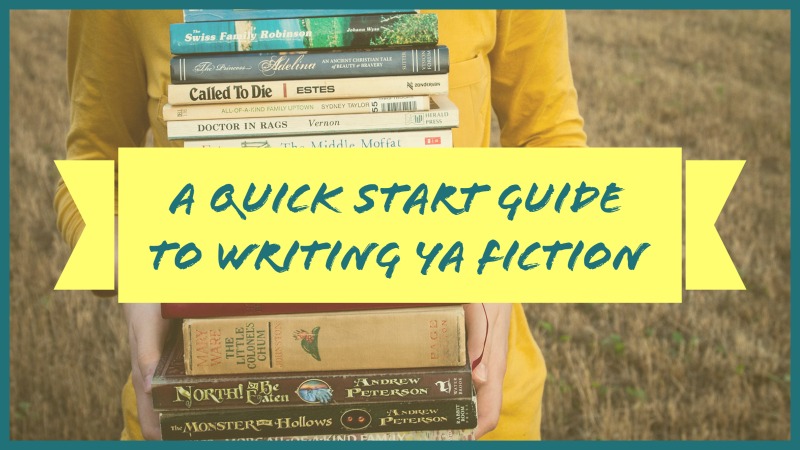 A Quick Start Guide To Writing YA Fiction

Are you writing for a teenage audience? Use our quick start guide to writing YA (young adult) fiction to help you write your stories.

Young Adult (YA) is a popular genre. It is typically read by teenagers, but often crosses over into adult markets. Like all genres, it relies on certain plot points, tropes, and is victimised by clichés.

Every genre has certain requirements. These are considered tropes, or if used badly, clichés. Tropes are familiar devices we use in storytelling. A cliché is a trope that is overused or just unimaginative and expected.

It is up to the writer to study the genre, to identify the tropes, and find new imaginative ways to use it and to move away from cliché. It’s a fine line: we like the familiarity of genre, but love unexpected characters and story lines, and we absolutely adore a good surprise.

To keep this post short(-ish), we’ll say these stories are either set in reality, or are fantasy/sci-fi(-ish – especially the dystopian variety). There is a lot of space in between.

A Quick Start Guide To Writing YA Fiction

Let’s look at some familiar devices in YA that will get you going:

1. Start With Puberty And Add An Apocalyptic Event.

If we stick with the age categories I mentioned last week, you’ll remember that YA is read by readers between 12 and 18 years. Rule of thumb, the protagonist is usually about two years older than the reader. Now, a thirteen-year-old with a bike is more restricted than an eighteen-year-old with a car. Think about the age of the hero. It will help you to know what your character can or cannot do.

Write for the YA audience – not for a possible adult audience. You are writing about a teenager. Regardless of the setting or world events, everything will be filtered by a teenager’s point of view.

You can make use of an obligatory coming of age celebration or event. Your character needs to learn to drive/do make-up/dance/do magic/fight/pass an exam/rule a far off inter-planetary alliance plagued by octogenarian aliens.

2. The Hero Is Often A Loner But Is Also Alone.

Parents are often not very present in these books. They tend to be drunk, emotionally absent, overworked, dead, or missing. Often, finding the missing parent is the story goal. Most adults are depicted as useless and rather stupid. You can do better.

The hero is often a loner. They are rarely the ‘cool’ kid, unless they are a ‘cool’ kid plagued by insecurities or about to crack under ‘cool’ kid pressure.

Triumph of the underdog is a popular theme, but how can you reinvent or subvert it?

3. All Alone They Must Save The World Or Survive High School. Sometimes Both.

Unless you are in the middle of the apocalypse, there will most likely be some kind of formal schooling or structure for the kids, even plans for the school holidays or after-school jobs and activities. Adults can’t resist keeping kids busy. This will keep them occupied and add conflict for them as they try to achieve the goal.

What is the story goal? Finding a date for the dance? Raising money for the sports team? Learning to do magic? Completing a school project or winning a competition? Stopping the evil principal/monster/demon/bitch cheer captain?

The antagonist is often an authority figure or a popular peer. Go back to the goal. Who is the character who most opposes the goal? Choose one character as the antagonist, but there will be minions and bullies to do their bidding and make it difficult for the hero.

Puberty is a time of change. The hero often discovers latent powers during this time. An object to activate their powers will also work. If it is not fantasy, the hero can have a previously undiscovered or hidden talent or skill. They may be able to access information or an object that will help them achieve their goal.

The hero is a loner, but they usually have acquaintances who are also outcasts who can help them. If not, a reluctant alliance born of necessity will suffice. They need a support crew whether they want one or not. This is a lovely source of conflict.

To achieve the goal, they will need a plan. This is usually ‘doing what you can with the tools that you have’ plus a good dose of pubescent arrogance combined with ignorance. Don’t forget to add a good dash of idealism. Are they planning to fool the principal, steal a database, find a girlfriend, destroy a castle, or stage a protest?

Everything was going according to the plan until the crush arrived. Our hero will falter, they will blush. They will be manipulated, or not, but do not forget to add some raging hormones, shy smiles, and a tentative brush of virginal lips. Well, virginal until someone reads the graffiti in the third stall.

And then the green-eyed monster arrives. The hero is often torn between two loves. One from before and someone new. Usually, we know who we are rooting for, but nothing spices up a plot like bad choices.

9. Public Shaming And Other Blunders.

Teenagers are brutal. Add social media and you’ve got, well, a pretty accurate description of our current lives. That said, kids are kids. There are sweet, kind, good kids and there are miserable, horrible, mean, unkind kids. Mix it up, but the access to tech, public platforms, and the absence of a fully developed prefrontal cortex definitely raises the stakes for a young hero.

Remember when we said fiction is all about change and the character arc? How will you show that change? At some point in these stories your hero will receive a new outfit. Think prom dresses, school uniforms, team jerseys. This can be at the beginning of the story and can be part of the inciting moment that starts the story. And it can happen later in the story for a specific reason, think graduation, a makeover, disguises. This shows a change in status or mindset.

11. Saving The World And Other Story Goals.

Sci-fi and fantasy, and their cousin dystopian fiction, is often about saving the world, as in literally. They need to stop the evil villain from destroying their society. In a YA novel that is set in reality, the story goal is usually related to school, home life, finding a missing parent and the treasure they were looking for when they went missing, finding out how the book ends, winning the tournament, or keeping your online identity secret. But it is firmly set in a teenager’s world.

I hope this quick start guide to writing YA helps you. YA is one of my favourite genres. Yes, I am poking fun at many of the tropes, but do I mind them? No. As long there is a balance between old and new. Do I still avidly read them? Yes. Hundreds of books. Am I a teenager? No. Is my frontal cortex fully developed? Not so sure. But I love reading YA.

The biggest mistake you can make in this genre is to think that it is easy to write for teenagers or that you can be lazy, because they will not mind. The standard for YA is high. The competition is intense.

It’s way harder than writing for adults. You have all the demands of an adult genre coupled with the blatant disdain and disregard for your excuses. This is not an audience who will hesitate to tell you exactly how boring they found your story.

That said, it’s the coolest, fun audience. Teenagers can be condescending, but they are also open-minded, excited to explore new places, thoughts, devices and are completely willing suspend all disbelief to plunge into your story with you.