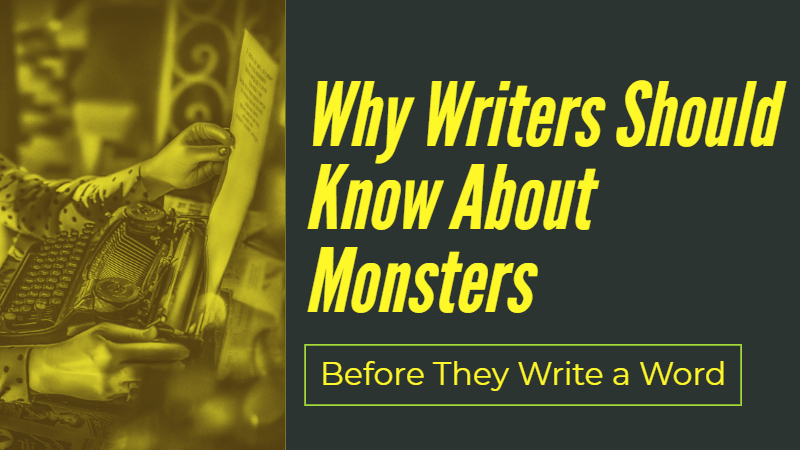 In this post, we discuss why writers should know about monsters before they write a word about them.

Monsters are a key element in many genres of writing. We associate them most with horror, but they appear in fantasy and science fiction just as often. They may even be used as a backdrop to your romance movie (see Warm Bodies – a ‘Zomcom’).

I recently compiled a glossary of fantasy terms that contains several common monsters. In this post, I discuss why you need to research these creatures before you write about them.

Why Writers Should Know About Monsters

Writers should know about monsters. You need to know what you are dealing with or your writing will seem inauthentic and shallow. Using the examples of devils and demons below, I hope I will convince you to do your homework on our spooky friends before you commit them to the written page.

Note: You need not be bound by the common rules for monsters. You can make your own, but only if you have a better idea. At some level, all monsters are made up, but you need to get the big picture right. If you don’t, your monsters won’t feel real.

The Origins Of Tolkien’s Monsters

If we look at the world-building in The Lord of the Rings, we are hard pressed to find examples of ‘made up’ monsters.

Tolkien gets the vast majority of his monsters from Scandinavian folklore. Trolls, Elves, Dwarves, Dragons, Goblins, and even the Hobbits are not unfamiliar to anyone who has a passing familiarity with Northern European myths.

He does make up two new creatures the Orc and Balrog (There may possibly be more, but don’t overthink this).

Orcs are just human-sized goblins or hob-goblins. Sometimes, they have been crossbred with elves or men to make them bigger. The Balrog is just a devil or demon (I think it’s a devil but he never makes this very clear) because it serves the Devil, Morgoth.

Now you might say, “What about the spiders and ‘werebears‘ from the Hobbit?”

I have not looked it up, but if Tolkien invented the idea of giant spiders, I’ll eat a bag of change.

The idea that people that can change into animals, especially wolves, probably comes from Ovid. Werewolf means man-wolf and comes from the Old English while the Greek word is Lycanthrope or Wolf Person.

This maintains a sense of continuity that the reader needs to buy into the story. It also saves the writer time and energy, because they will not have to explain the new monster in detail.

The devil originates in Christian Mythology as Lucifer the Light Bringer. He is a fallen angel who rebelled against heaven.

Important character traits of Lucifer are:

These traits have been applied to devils in general.

Notably, he is not really a devil, even though he is perhaps the leader of the devils.

It is important to note that the thread that ties devils together is that they all respect the law. While demons don’t.

Demons predate devils. They come from a greater variety of religions.

Their character traits are:

For example, Lucifer might give a mortal power for the price of their soul. A demon might just do it to see what trouble they could cause.

There are thousands of named demons. They usually have a history. Sometimes, they were gods from other religions that were incorporated into Christian mythology.

Demons are also treated as examples of the seven deadly sins.

Other Recommendations For Writers Writing About Monsters

Most monsters come from mythologies. Writers need to know about these monsters before you start writing your stories. It might help you make them seem more real.

For example, do you know that genies are actually called Djinn? They are horrific monsters that want kill all humans. To find out why, read A Complete Glossary Of Terms For Fantasy Writers

My advice is to get to know the following traditions:

It may seem like a lot, but you know most of them already. If you don’t, let me suggest a few books:

Once you have read these, you will be an expert on monsters. You will be able to spot a Bugbear from a Hobgoblin at 100 feet on a foggy day.

I hope this shows you why writers should know about monsters. I hope it helps you have fun adding to the mythology of monsters in your stories.