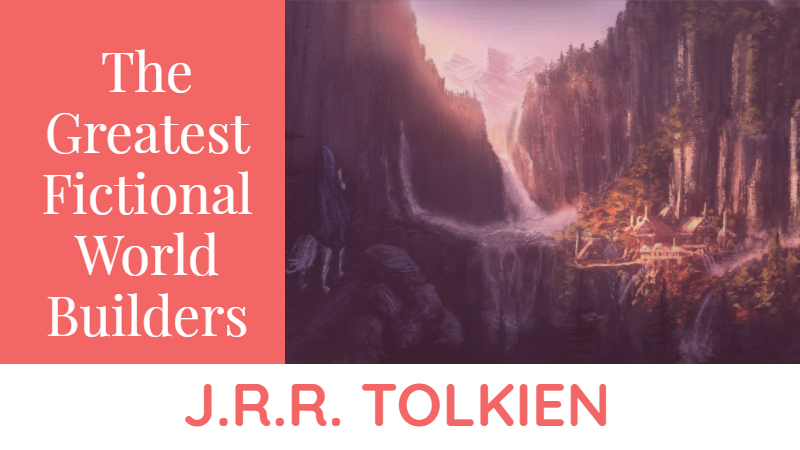 Welcome to the second post in my greatest fictional world builders series. This series is a reference and a resource for writers who are building their own worlds.

(Look out for the next post in the series. Sign up for our newsletter to get our Daily Writing Links, and you won’t miss out.)

I started with one of the greatest fictional world builders of all time: Terry Pratchett. In this post I will write about J.R.R. Tolkien.

[John Ronald Reuel Tolkien was a writer, poet, philologist, and university professor, best known for the classic high fantasy works: The Hobbit, The Lord of the Rings, and The Silmarillion. He was born 3 January 1892, and died 2 September 1973.]

There are no other books I have read more often than The Hobbit and The Lord of the Rings. They have captivated my imagination for many years, and I am not alone in feeling this.

Any form of the modern fantasy genre is derived from Tolkien’s work. Games, movies, and books all share a common root and shorthand thanks to the popularity of these works.

For this reason, as a writer of fantasy, you must know the work of J.R.R. Tolkien. Tolkien wrote in the early twentieth century. Unlike many writers of the time, he did not focus on saying anything about the world around him. Tolkien created his own world because he felt it should already exist.

He often spoke of the lack of folklore surrounding the English people. England took legends from other cultures and used them, but it did not have a rich history like Irish or Scandinavian myths did.

While the early modern period was full to bursting with distinctly English culture, medieval England only had Christian mythological works as well as French inspired myths to drawn on.

Tolkien wanted to create a fundamentally English myth that felt like it belonged to the land he was writing it for.

This would take him most of his life.

Tolkien, who was born in South Africa, had a troubled, unstable childhood after the death of his father. Because of this, he sought out a stable life and, only once he was comfortable, did he consider turning to creative pursuits.

Tolkien was a professor who taught Anglo-Saxon. This gave him the stability he was looking for. However, it was not always the most interesting job and he found himself daydreaming. This soon took the form of a creative urge.

He often translated works from Old English to Modern English. You can find a number of them at university bookstores. Sir Gwen and the Green Knight and Beowulf are two well-known examples of this.

Tolkien was well aware that works like these and even the Arthurian myths were mostly stolen from French sources. As such, they never really felt like they belonged to the English culture. With an unfortunate history of being conquered by every invading culture before the 1600s, English mythology is mostly forgotten and, if any does exist, it is distorted from what may have originally existed.

This motivated Tolkien to create a bridge in that cultural gap.

The successful reception of his work and how widely it was adopted throughout the English world shows that he was right. The English world needed a myth to cling to that felt English. The Lord of the Rings provided that.

‘If you’re going to have a complicated story you must work to a map; otherwise you’ll never make a map of it afterwards.’ ~J.R.R. Tolkien

Tolkien was a meticulous man and not one to write from the seat of his pants. His world evolved over time, a long time. He created myths and histories for all the peoples in his story. He created simple languages and grammars that these people might use.

From this, he derived a logic to their actions and the feeling of their culture.

Slowly, carefully, moving one piece at a time, he wrote a creation myth for his world.

He populated it with gods and demons. He wrote stories of the wars before men were born, and how elves were linked to the events of history. He explained why they are called elves and not elfs. He was so convincing in this, that this is how we now spell the plural of elf.

He set up the conflict between men and orcs as well as the friendship between elves and men. He told us why dwarves hate elves. We would not have the stock fantasy villain in the orc if not for Tolkien. Large fantasy gaming companies like Games Workshop and Blizzard would surely be very different.

Suggested reading: A Complete Glossary Of Terms For Fantasy Writers

He did all this as research for his book. None of this information can be found in the main series of the Middle-earth books he wrote. We only know this because his son, Christopher edited and published his notes on his world. These would become The Silmarillion.

This was the audacious level of dedication Tolkien had for making his world live and breathe.

Tolkien wrote during and between the wars. He spent time at war during the First World War and watched his son go off to war in the Second World War.

Tolkien has said that his work was not about these wars. I do believe he believed this.

However, both books are about a man who does not want to go to battle. He finds himself in a war and luckily makes it back home again. I think The Lord of the Rings would have been much darker if his son had not come home.

It was a time when industrialisation was turning England (and the world) from a pleasant green place to a world of red bricks and factories.

New and terrible weapons were being invented daily and some time between The Hobbit and The Lord of the Rings humanity acquired the ability to destroy the Earth.

While The Hobbit was about a nice man having an adventure that contained a war, The Lord of the Rings was an epic about saving the world from ruin.  More importantly, it was about saving the simple good things and not losing yourself to the fire and smog of progress. It was about showing that just because you can do a thing does not mean that that thing should be done.

He said he wrote The Hobbit for his children. It does seem like it was written to entertain a child’s mind. Which is certainly why I have read it dozens of times.

But, The Lord of the Rings is a beautiful lecture and a lyrical rebuke against a society that has lost all sense of perspective.

It is unfortunately directed at exactly the kind of person who is not interested the beauty of a simple life.

It is also written in a long, drawn-out manner that people in a rush to achieve pointless goals will not appreciate.

But, more than anything, it was written for those who appreciate a well-formed sentence that can both devastate and inspire while sapping all your energy for the rest of the day.

If you could not read this in school or you gave up mid-way and thought it was not for you, perhaps give it another go. You might find that you have grown since then and that you can better appreciate it now.

I know as a boy I didn’t quite understand how sad the theme of the elves was. In fact, I thought they were silly. But, I’m crying now thinking about Lothlórien and other things that will never be the same or as beautiful again.

Luckily, there is very little Tolkien ever finished, so it won’t take long.

Tolkien is the inventor of world building. He is who your English professor was thinking of when they taught you about it.

His work is old-fashioned and seems poorly paced, but this is where all fantasy started. Before Tolkien Elfs were a faery tale nobody believed in. They were an uncared-for-story from the old world.

Now, Elves populate thousands of fictional worlds and thousands of grown adults dress up as them because they want to be a part of the magic that Tolkien left us.

I have never encountered a fantasy author who has not read The Lord of the Rings. Granted, some mock it, or talk about it with distaste, but I bet you can find a clip of your favourite fantasy novelist talking about the first time they read it with the expression of a man who has just seen the face of God.

The Best Writing Tip: You cannot really write fantasy if you have not read these books.

by Christopher Luke Dean (Thinking about so much Flotsam and Jetsam.)