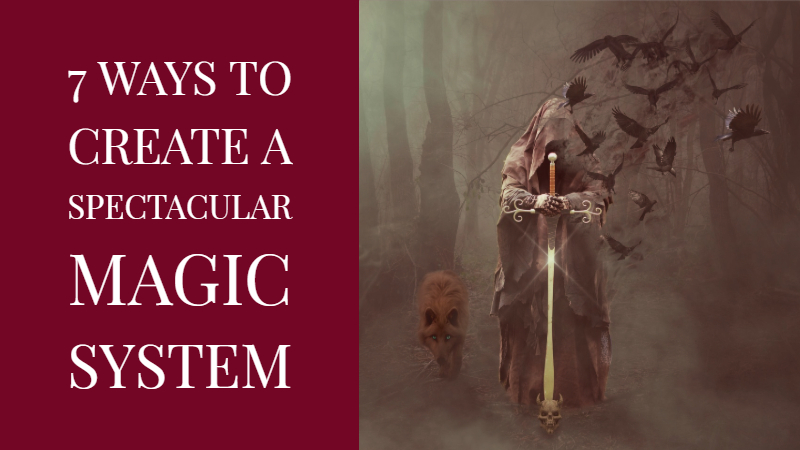 Do you write fantasy fiction? Use this list to create a spectacular magic system for your novel.

What is a magic system?

In fantasy, magic makes your world go round. It is not an afterthought. It is an important literary device that shapes your writing.

Magic, and how it works, will dictate how your characters act. It does this the same way gravity makes the earth spin.

If you think this kind of thing is stupid, you are not going to be able to write about it. This is a deadly serious topic. It has made authors’ careers and it has relegated others to obscurity.

7 Ways To Create A Magic System For Your Novel

There are roughly two types of fantasy. High Fantasy and Low Fantasy.

They are not related in any way. Not at all.

High Fantasy deals with dark lords and world ending events. Low Fantasy might deal with fixing the post office with the help of mythical creatures. (Would a centaur be a good postman?)

But, the the magic system affects the tone.

Writing Tip: When deciding the tone, decide how much magic you want in it, because having too much magic can make your story seem light-hearted.

Suggested reading: The 4 Pillars Of Fantasy

Your magic system must adhere to its own logic. If this breaks down, it creates plot holes. Plot holes need thousands of words to explain away and this will bore your reader.

Nobody wants to ask the question, ‘Why didn’t they just use magic to fly away from danger?’ when clearly you show your characters doing this as a pastime in another scene.

Just say that it takes ten minutes to cast the “Fly” spell. Then you can still have your dramatic chase scene through the woods.

The problem with consistency in high magic settings like Doctor Strange, the Marvel Comic, is that Doctor Strange can do anything including turning back time. So, you may forget what the rules are when you have so few of them. But whatever they are, don’t break them. Rather work around them.

In Harry Potter you need a wand to do magic. Simple. If you want to create tension and keep the story consistent Harry just needs to drop his wand. Then he’s just a boy. Problem solved.

A simple rule to your magic system like this will save you trouble later.

Writing Tip: Create an internal logic that you find easy to understand and that is simple to write about. Then reference back to this whenever you write about magic.

3. Choose carefully who can use it.

Sometimes magic is what makes a character special. In children’s books, where you want a bland protagonist the kids can project themselves onto, magic should be restricted to the main cast only.

On the other hand, in some settings, it’s fun if everyone has some magic. Perhaps, cell phones are all made by two or three competing Wizards? Perhaps Samsung the Blue and Applesen the Greedy have a bet going to see who can make more muggles addicted to Instagram.

One where everybody in the world knows it’s there.
OR
One where it’s a secret.

This will affect how people view your characters. In the Forgotten Realms, outside the Archmage Elminster’s tower, these warnings magically appear as a person walks towards it:

But in The Magicians, magicians hide from the public by often living double lives.

In the first setting, it clearly pays to advertise that a wizard lives here. In the second, it might be illegal in wizard society to even tell your extended family that magic is real.

Writing Tip: If in doubt, write magic as if it is a rare power. This automatically makes your readers see it as important, mystical, and interesting. It also allows them to engage with childlike wish fulfilment. This helps them buy into the setting.

4. Tell us where Magic comes from.

Magic can come from three sources:

Note: A sorcerer is a source of magic.

Writing Tip: If you don’t have a story goal in mind finding out where magic comes from is a perfect way to give your characters something to strive for.  Alternatively, use this as a big reveal that tells us something important about your world.

It you have magic and you don’t use it, what’s the point?

Have fun with it. Make fantastic creatures and enchanting landscapes.

Tell us about how gnomes create black holes to suck up their trash. Or how an elf spent a thousand years talking to a tree, because he was just too polite to leave.

Have your character use it in ways that will either put wonder into your reader or at least make them laugh. Maybe even cry?

Writing Tip: People read about magic because it is entertaining. It has no real world value. So, if your magic is boring you are failing at a basic aspect of magic fantasy writing. If you are struggling to invent playful ways to use magic, ask a small child to explain how their phone works. Or even better your grandmother.

Don’t have magic just to have it.

Magic is what makes worlds like Harry Potter worth reading. It enhances the enjoyment of the reader by making character moments more meaningful.

On the other hand, A Game of Thrones would be just as good without it. This is because it is a character-driven plot. The dragons and snow zombies could just as well be big siege weapons and northern barbarians.

The Lord of the Rings depends on magic to drive the plot. The magic ring starts the quest. It warps characters’ minds. Makes them turn evil. It needs to be destroyed to make the world right again. At every twist in the plot magic drives our characters onward.

Writing Tip: Sometimes, it is more interesting to have a reason to want magic than to be able to use magic. Your character’s motivations come before all other considerations. Magic is just a plot device to serve your story needs.

And you need to write something people want to read.

7. Know who to steal ideas from.

To really know how to make a magic system you need to steal from the best.

So, don’t start with them.

Writing Tip: I’ll paraphrase Terry Pratchett here. Writers are readers who have read so much that they start to overflow. Nobody has ever become worse at writing by reading more.

This list will help you make your magic setting into one where your reader feels comfortable and wants to visit again and again.