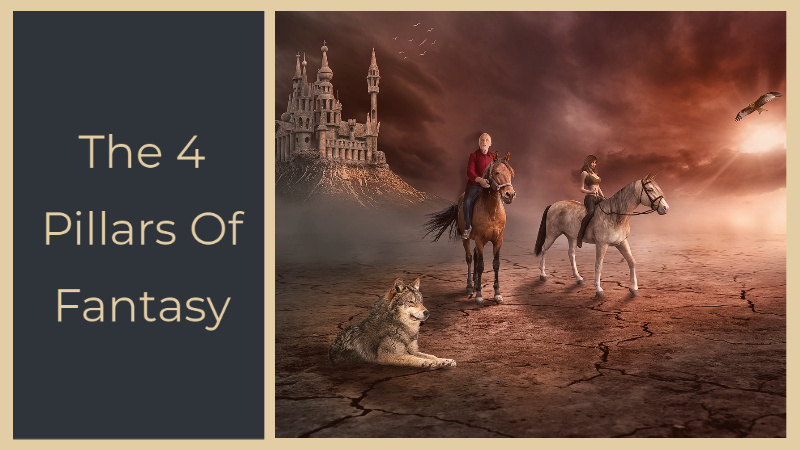 Have you ever tried to write a fantasy and found the result wanting? In this post, we look at how the 4 pillars of fantasy can improve your fantasy story.

In this post, we will be exploring the four pillars of fantasy.

Fantasy is arguably the most popular genre. It has produced the world’s most potent, widely impactful, and enduring stories, from The Lord of the Rings to Harry Potter

to Game of Thrones. This is because Fantasy guarantees us the three things we long for most from stories:

Sure, we can get all three in other genres, but we must have deep knowledge of what we’re writing about to do so well. And most of us lack the means necessary to visit little known places, interact with the people there, and engage with a way of life unlike our own. But, within the Fantasy genre, we can do everything ourselves!

Now, wait– does that mean writing Fantasy is like… cheating?

Yes, in Fantasy we can create all these story elements, but if we don’t put in the work to do them justice, our story won’t hold together. And if the story doesn’t hold together, you can bet readers won’t be interested.

So, in this article we will look at the most fundamental elements you must understand to write successful Fantasy stories in any sub-genre…

The 4 Pillars Of Fantasy

World building is the thing most readers and writers get excited about in Fantasy. It is certainly the most talked about element. And this makes sense, right? Any time we read or write fiction, we enter an alternate reality–the fictional world. It’s just that, in Fantasy, we crank up the imaginative elements of that world. In fact, world-building is so important in Fantasy it often defines what sub-genre your story’s in.

Let’s look at the kinds of worlds featured in various sub-genres:

For the novice Fantasy writer, it’s wise to only use one fantastical element per category and work out the ripple effects they might have. Ask yourself: how do these fantastical elements (whether magic, a creature, or both) interact with and affect the protagonist and their society?

Don’t believe it’s wise to start so small? Consider that King has written dozens of books all centred on various iterations of his “Shining” concept. I’d say he’s gotten some good mileage out of that one element!

When using magic in your story, it’s wise to consider what effect you’re going for. Do you want to explore clever, fascinating, and unconventional solutions to difficult problems? Then you’ll want to go with a Hard Magic system, wherein strict rules govern magic.

A Hard Magic system requires that you define:

I’ll use blood-bending from the Avatar TV show as an example:

(Notice that, while some of these criteria overlap, they are all important.)

On to Soft Magic!

If you’re looking to inspire wonder in your audience, Soft Magic may be the way to go. In a Soft Magic system, it’s unclear how the magic functions and there are no known limits to what it can do. Any time Gandalf uses magic in The Lord of the Rings, we aren’t meant to ask “How’d he do that?” We’re supposed to let our jaws drop and say, “Wow, cool!”

Your story’s magic will exist on a sliding scale that leans closer to either end of the spectrum I’ve laid out here—it may be harder or softer. You might even create a Hybrid Magic System that hangs out in the dead centre of this continuum: perhaps how it functions is defined (but only barely) and the limits too are vague.

As a final note before moving on: know that magic should never be a simple, painless solution to a story problem. Instead, magic should be a means to explore the ramifications of its existence, whether positive or negative.

These are animals or races that have been rumoured to exist in myths or folklore, OR original creatures the author has created. We often use Fantasy creatures to represent specific concepts and ideas. A unicorn often stands for innocence in Fantasy, so it’s common for the death of a unicorn to herald a character entering adulthood, or disenchantment–it could even represent the end of an era of peace. Dragons often symbolise greed and destruction—you get the idea.

There may also be unique races of people in your story. These need careful thought. But—when used well—they can explore real-world issues of bigotry and prejudice with greater objectivity. Think of the X-Men who, when they were first introduced, were used as an allegory for the civil rights movement in the US. Each new generation has adapted X-Men to explore the social issues of the time from a safe enough distance that the audience can see the underlying issues, then apply what they’ve learned in real life.

As I mentioned in my article on horror, whatever creatures and races you include in your fantasy story shouldn’t be there as window-dressing—they must be thematically resonant and essential for your story to function.

[Suggested reading: A Complete Glossary Of Terms For Fantasy Writers]

Last, the hero(ine). This character is an outsider or uninitiate to the Fantasy world, magic system, or supernatural creatures, who must engage these fantastical elements. They are our eyes and ears as the reader, and because the story’s fantastic elements are new to them, the character becomes a conduit for us to experience the world, magic, and its creatures or races. They are the avatar the audience inhabits to explore a Fantasy story.

Whew! That was a lot to cover, but I hope you’ve learned enough to better appreciate how Fantasy works. Hopefully, you can enjoy it even more as a reader, and—maybe, just maybe—you’ll go on to write a satisfying Fantasy story of your own!