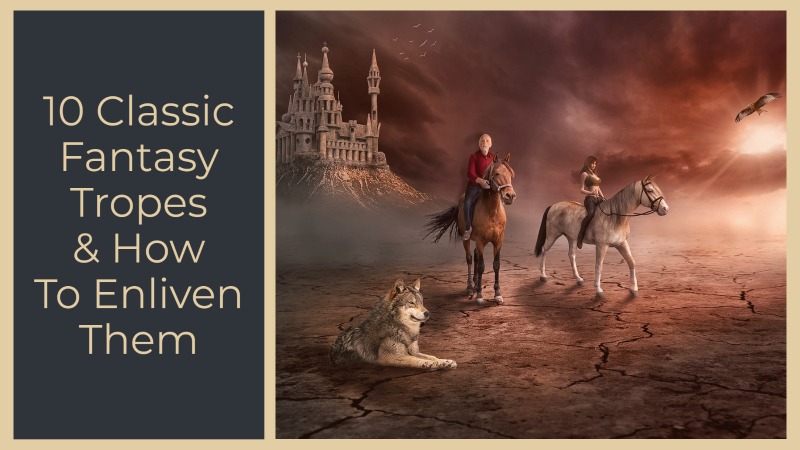 If you want to write fantasy, read this post where we look at 10 classic fantasy tropes and how to enliven them.

Okay, so you want to write a Fantasy story. That makes sense — it’s an enduringly popular genre and one you love.

But that might also be a problem, right? Because Fantasy is so popular, it can feel like everything’s been done to death—like there’s nothing left for you to write about.

I get it—I’ve been there.

But don’t give up hope yet! I’ve made a thorough analysis studying the Fantasy genre, and I’ve learned some exciting stuff.

For one, Fantasy is an extremely trope-heavy genre, meaning you kind of have to keep the tropes and archetypes intact for readers to recognise (or even accept) your story as a work of Fantasy.

If you don’t believe me, consider George Lucas’s Star Wars, which he insists to this day is a work of Fantasy, not Sci-fi. Or what about Anne McCaffrey’s Dragon Riders series, which she says is Sci-fi, not Fantasy? In the first case, Star Wars advanced tech confused the audience. In the second, the fact that there are Dragons in a Sci-fi story threw readers off as well.

My second discovery was that, while it’s necessary to maintain all the key tropes and archetypes in a Fantasy story (Lucas and McCaffrey would probably assure you even the aesthetic is important), there are virtually infinite ways to enliven these tropes if you have a strong grasp of them.

In this post, we’ll cover 10 classic Fantasy tropes and offer a few fun ways to enliven them.

10 Classic Fantasy Tropes & How To Enliven Them

By this point, we’ve all come to expect the same formula for this character.

A peasant boy who longs for adventure meets a wise old wizard. From this wizard he learns he’s actually a member of the royal line and the prophesied hero who will go on a quest to find the magic weapon which he’ll wield to defeat the dark one, save the princess, restore the world, and maybe even reign as the new king.

But what if we subtly twist each detail in a way that is fresh and unexpected?

A young aristocrat who loves her life exactly as it is finds out her family murdered and stole to gain their wealth. Worse, the family they murdered and stole from was prophesied to produce a hero. The aristocrat discovers the odd pitchfork the stable hands have been using is actually a trident—the magic weapon the hero’s family had passed down for generations, and which the hero was supposed to use to defeat a dark power. She realises her family is the source of the dark power, so she steals the trident, and flees on a quest to find an old crone, rumoured to be the last remaining member of the heroic family line. The girl swears to do what she can do to make things right and fulfil the prophecy.

Not perfect, but not bad, right? Let’s see if we can keep this going.

For each trope/archetype, I’ll lay out the played-out version of it, then present a subtle twist. Sound like a plan? Great! Let’s keep going!

A wise old man, usually a wizard, comes into the hero’s life to tell him to drop everything and head out on a quest! Why? Because he’s the one prophesied to save the world. The mentor may even offer to train the hero in the magic arts or teach them to wield a normal version of the magic weapon they will eventually use to defeat the dark forces and save the day.

One day, a bratty little peasant boy, who’s locally famous for being preternaturally gifted with magic and weapons, is interrupted from his daily chores. A young witch has come to learn magic from him so she can hone her skills enough to protect the kingdom from an invading force. He’s delighted for the excuse to skip his chores and play with magic and swords, but the young witch he is to train is so grave, anxious, and boring.

A peasant boy is tasked by his wise old wizard mentor to find the magic weapon, acquire a band of powerful allies, and then—together — fight and defeat the forces of darkness, save the princess, and restore the land.

A twenty-something bachelor (his village’s magic healer), who has long dreamt of being tasked with a sacred quest like in the folktales, decides it’s time he heads out to find adventure for himself. When he tells the village’s elders, they laugh at him, then beg him not to go for he is ill-equipped. So the healer forges a magic shield and helmet, and sets out to find a quest, allies to accompany him, a dark force to defeat, and a princess to save. Although he never finds a major quest, everywhere he goes, the healer finds friends and allies whom he can aid in their own quests; he never defeats a dark lord, but he spreads light wherever he goes. And although he never rescues a princess, during his travels he meets a young widow who insists its time someone rescue him from a hard life on the road, and he heartily accepts.

A fellowship of five joins the hero on his quest, each one coming aboard at a different stop along his journey: The Sidekick (a charming, contrarian thief), The Brains (a magic-user), The Brawn (a powerful warrior), The Healer (a sweet, sensitive youth), and The Fool (the wisecracking goof with a hidden talent).

First try consolidating characters by merging archetypes—maybe in unexpected combos. Then, cast them against type with factors such as age, sex, gender identity, body type. For example:

A common trope is an alternate version of medieval/renaissance era Western Europe, where magic is real, and it is populated by the various fairy creatures and monsters of the European folklore tradition.

This one is pretty simple—why not try a different place and time for your alternate, magical land? Here are a few examples.

For this trope, all we have to do is build off the last one we covered!

So, for this one, we all know the Played-out Trope:

Take all the creatures and monster of European folklore (or later adopted by it), and mix them together, giving each a monolithic, mono-cultural society:

Dwarves live in mountains and are tech-savvy; Elves live in the woods and have powerful, ancient magic; Fairies are little winged pixies who serve as the hero’s magical companion, Gnomes are creepy little mischievous men with pointed hats; Giants are dim-witted and live in the mountains, Mermaids are beautiful half-fish, half-people who live in Atlantis, etc.

Well, to start, try researching and adapting the folkloric peoples of whichever culture you’re adapting for your Fantasy story. Next, imagine what they might be like in the era you’ve chosen.

Or, if you just really love European folkloric peoples, do your research and see what insights you discover. Maybe try portraying fairies as they were before Disney got a hold of them: terrifying demonic imps (who weren’t all that small, either) that tried to steal the souls of young children! Maybe, once you better understand how these folkloric peoples were originally portrayed versus how they’ve been adapted in modern times, you can put an interesting spin on them that uses elements of both traditions. Maybe your fairy is the hero’s magical companion, but they are also demonic imps the hero has to keep in check by feeding them the souls of slain monsters—yikes!

A magical sword stuck in a plinth lies waiting in a clearing of the ancient, magical forest. Only the worthy—the pure of heart—can wield it. And only with this sword in hand will the hero have the power to banish evil from the land!

Honestly, just about anything other than the above would do just fine, but let’s try to imagine the same general concept with a few little tweaks.

What if instead it was…

…a cursed halberd, held aloft by a statue behind a sanctuary altar? Anyone may wield it, but at a terrible price: it must spill a creature’s lifeblood at least once per lunar cycle, and the more blood it spills, the more powerful it becomes. However, should the wielder fail to ‘feed’ it even once, it will recall all those the wielder has slain. These slain undead will then track and kill the current wielder and return the halberd to the statue.

The same principles are at work here that we discussed in the earlier section on Fairy peoples. Try using monsters specific to the place, time, and culture that you’ve based your Fantasy’s world on.

The hero must use the magic weapon to slay the dragon being used to guard the princess held captive in its lair.

A wandering warrior goes to slay a monster tormenting the soldiers of an invading army who are guarding a town they recently colonised. The invading army had starved the townspeople to death, and their bones all melded together to form a giant skeleton (The Gashadokuro). It sits in the town centre waiting for soldiers to come fight it so it can eat them. With every soldier it devours, it adds to its mass. The only way to put it to rest, the warrior knows, is to subdue it and feed it a meal prepared by the invading army and blessed by a monk.

This one is tough because it is so steeped in antiquated and harmful gender stereotypes. Still, let’s see what we can do with it.

The kingdom’s princess is captured by the Dark One and locked in a dragon-guarded tower.

A kingdom is swayed to oust their ruling princess in favour of a new ruler, The Priestess of Light, who claims to share the will of the Goddess directly with the people. The Princess and her advisor, the kingdom’s Giant, are banished to the wilds outside the kingdom where they build a small village of their own. Here, they wait, hoping to welcome in any of their former citizens when they inevitably realise the Priestess of Light is a fraud.

An evil sorcerer uses an ancient magic to control monstrous creatures and manipulate folkloric peoples to conquer the greatest kingdom in the land. From here, they try to expand their dominion throughout the known world.

A powerful sorcerer sees great inequities in the kingdom, which they believe they can fix if only they were in control. Through ruthless determination, they conquer the kingdom, but as they make more enemies, they find it harder to stick to their morals and end up committing terrible atrocities in the name of their cause.

Phew! That was a LOT! 10 classic fantasy tropes enlivened!

Well, now I hope you can see that if—after developing a foundational understanding of Fantasy’s key trope– I can spit out 10 decently fresh takes on them, you can too!

And, if you enjoyed this article and want to learn more about Fantasy, check out my recently released workbook here: The Fantasy Workbook

It’s packed with info and insights like these, along with some fun, challenging exercises. Take a look—and thanks for reading!

by Oliver Fox
Oliver earned his BFA from the University of Memphis (2015). After graduation, he worked as an editorial assistant for The Pinch (’16). Currently, he works as a manuscript analyst and is an MFA candidate at the University of New Orleans.