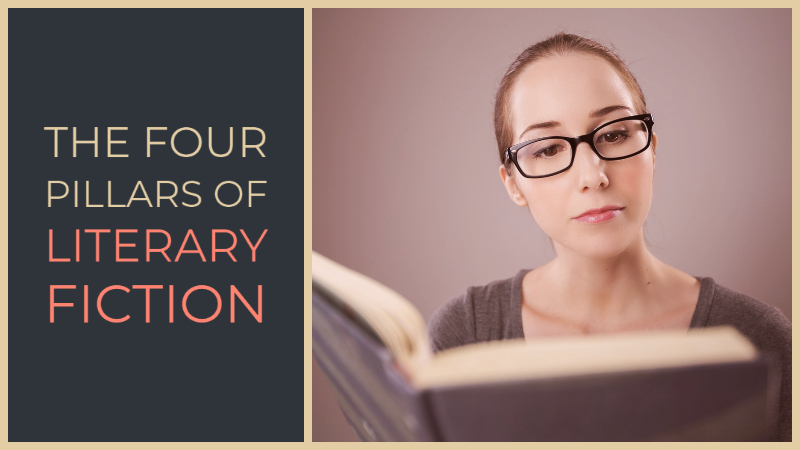 We have written about:

In this post, we will be exploring the four pillars of literary fiction.

Literary Fiction is often touted as the gold standard for fiction. This is because, supposedly, it defies genre conventions and formulae. But if that’s true… how do you identify literary fiction?

I mean, we know something belongs to the Horror or Romance genres because they contain certain genre-specific tropes. Is your story about an ordinary protagonist in an isolated, disempowering setting with a dreadful past? Do they face a monstrous force? Cool— that’s a Horror story! See how handy that is?

So, how do you know which stories are Literary? What are its defining features? What are the pillars of literary fiction? I’ve spent almost a decade in academia reading, analysing, and dissecting exemplars of the Literary movement. In workshops, I’ve practiced implementing the techniques favoured by literary writers in my own work. Over that period of study, I’ve developed a theory of how to define Literary fiction I find satisfying.

I realised the source of confusion is that people use the term Literary Fiction to refer to a few different things, and to various combinations of those things. Many use it as a catch-all term to mean ‘superior quality fiction’. But this is a pretty hazy, subjective application of the term. So, you know what? We are going to set that definition aside and dig a little deeper.

The 4 Pillars Of Literary Fiction

Here are four different potential features of a work (which might be used alone or together) that folks could be referring to when identifying a work as Literary Fiction:

As I unpack each of these pillars of literary fiction, I’ll give examples of writers who use some mix of them to illustrate the genre.

So, Sci-fi, Fantasy, and Horror are out right away because they include fantastical elements. The only exception to this rule is if the story is a work of surrealism or magic realism. That is to say, if there are fantastical elements in a literary narrative, they must be grounded in the real, contemporary world. They must be a product of either altered states of mind (surrealism), the unexplainable circumstances of an inconsistent reality (magic realism), or an ambiguous blend of both.

Romance, Mysteries, Westerns, Thrillers, et. al. are also forbidden. Why? Because they have recognisable story structures and character archetypes that are familiar, and thus limit narrative exploration.

Well, you might say, what on earth is there left to write about?

This means stories set in the present day and describing life as lived by every day, ordinary folks. Typically, works of CMR are drawn directly from the writer’s own experiences. A typical work of CMR might be about, say:

In a nutshell, CMR stories are little domestic/family/work dramas. If there is a fantastical element, this must turn out to be a trick of the main character’s perception or, and reflective of their internal psychological states. Or it could be the unexplainable phenomena of an inconsistent reality, a la magic realism.

Let’s apply a surrealist and magic realist twist to the CMR story premise above:

Say the main character’s new-born appears to them (and no one else) to be rapidly growing beyond normal human size. Or, while the child’s unnatural growth is literally happening, there is no known, explainable mechanism and all the other characters treat this bizarre occurrence as something mundane. In either case, the child growing bigger (and thus, more important) in the couples’ lives would serve as a literalised metaphor for the main character’s perception of the child.

Example: Although Jane Austen’s works are popular Romances that virtually established the modern archetypes and structures of the Romantic Comedy, they are still considered literary because they are works of contemporary mimetic realism for their time.

Literary style is the use of experimental, self-conscious, attention-grabbing prose. Usually, this is applied both at the level of word choice and sentence structure.

Sentences might be spare and muscular or ornate and long-winded (or some mix of both styles). But, whatever else it is, a literary style will demand the reader’s attention remain focused at the sentence level–even at the narrative’s expense.

It’s that simple. But if you’d like a deeper dive, check out this somewhat cheeky article I wrote on the subject.

Example: Cormac McCarthy is often considered a literary author because of his bombastic writing style which oscillates between almost brutalist minimalism and unfettered maximalism. Yet his stories are often in the same tradition as early pulps and pop fiction. They are Westerns, Noirs, and Post-apocalyptic dystopian stories.

For instance, in the literary mode…

If you peel back its meta trappings and snip out its post-modern, hypertext digressions, Mark Danielewski’s House of Leaves is, at its heart, a good old-fashioned Haunted House story. But, it is labelled a work of literary horror because of its circuitous, unconventional patchwork structures.

By literary attitude, I mean the writer’s approach to their story’s tone. This is a tone influenced by either the hopeless naivete of modernism or the cynical irony of postmodernism. The story has a dark, open ending, ambiguous and unhappy, leaving most questions the narrative raised unanswered. The story may even propose a radical ideology meant to overturn the status quo.

You’d be hard-pressed to find a work of literary fiction with a hopeful tone and/or attitude toward its characters and subject.

Putting It All Together:

Let’s finish up by looking at an example of an author whose work feature all four of the pillars of literary fiction above.

I’m sure you saw this one coming a mile away.

I have to be honest, I will always love The Sun Also Rises, but I challenge you to find a book with a more hopeless, self-serious tone.

I hope these pillars of literary fiction help clarify some of the mysteries surrounding Literary Fiction. In particular, I hope it dispels the notion that the literary moniker signifies superior quality fiction while Genre, Popular, and Speculative Fiction are pulp. As you can see, there are quite a few different criteria that might earn a work the designation of being called literary. And, in fact, many works in the above genres incorporate various degrees of literariness.

In the end, the term ‘Literary’ is to literature what the terms ‘Avant-garde’ is to film; you can apply an Avant-garde or Literary approach to a story in any genre or medium.

Yes, Literary works might win more prestigious prizes; still, some of the most enduring and worthy works in the canon of great literature meet none of these literary criteria.

For instance: Arthur Conan-Doyle’s Sherlock stories are simply written, subtly fantastical, conventionally plotted, and light in tone. The same is true of J.K. Rowling’s Harry Potter series. Still, although definitely not literary by any standard, the adventures of Holmes and Watson as well as Harry and company, are some of the most iconic, beloved, and enduring stories to date.