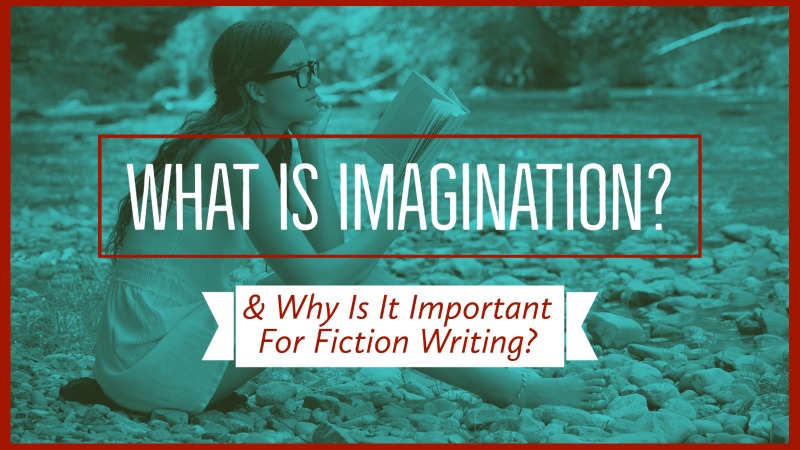 What Is Imagination & Why Is It Important For Fiction Writing?

In this post, we ask ‘What is imagination?’, look at the difference between imagination and creativity, and discuss why it’s important for fiction writing. There are also exercises for writers to try that are bound to spark your imagination.

Often dismissed as a bit of fancy, imagination is in fact a pervasive function of human experience and helps us make sense of the world.

This weekend, I visited my cousin. His three-year-old son came bounding into the room. Noah insisted his father didn’t call him by his name. He was now Rocky, the family Rottweiler.

The little boy was transformed. He wanted to lick instead of kiss and eat his biscuits from a bowl on the ground. We all went along with the ruse.

His imaginative play reminded me of my niece, Leila, at a similar age. One day, while handing out imaginary sweets, she burst into tears. When her mother asked what was wrong she cried out, ‘You’ve eaten them all!’

This got me thinking about imagination and how much fun it can be to make things up, to leave reality behind in a conscious way, and enjoy this kind of mental play. It is this ‘fun’ aspect we often forget as writers as we ‘grow up’.

But what exactly is imagination?

Imagination is the part of our minds that makes things up. It is how we form new ideas, images, or concepts of external objects that are not immediately present to the senses.

For example, it’s when you can see and almost feel the beautiful, butterscotch-coloured silk shirt you saw in a boutique’s window a few weeks ago, or taste your favourite dark-chocolate-and-cream mousse when you’re on a strict diet.

Sometimes, our imagination, as my grandmother would say, can also play tricks on us. The scratching sound on the window at midnight is suddenly the compass-style glass-cutter of a well-organised serial killer breaking into your bedroom. When you jerk back the curtains, it’s just an innocuous twig in the wind.

Immanuel Kant, the famous 18th century philosopher, developed a broader theory of imagination, one that beyond the narrow physical sense of the word.

Kant conceived that imagination contributes significantly to the cognitive, aesthetic, and moral aspects of our lives. It synthesises with how we think, reason, and make sense of the world around us.

Much like Kant, Dustin Stokes, a young philosopher at the University of Utah, is interested in philosophical and psychological accounts of our imaginative capacities.

In an essay for a 2104 collection called Philosophy of Creativity, he says that few philosophers have considered the distinction between imagination and creativity. Similarly, few psychologists have directly tested the difference between the two concepts.

Imagination plays an important role in our experiences of art, in the construction of theories, and in everyday life, Stokes writes on his website.

The Ups And Downs Of Imagination

It seems that our brains behave differently when we are in ‘imagine mode’ as humans.

LiveScience, a science news website, reported that reality and imagination flow in different directions in the brain.

In fact, the same article reported that employing our imagination involves 11 areas of our brains.

Why Is It Important For Fiction Writing?

Imagination is a writer’s best friend. No artist will argue its rich and unfathomable resources.

Some of us think of it as a deep, nourishing well, others as a giant, magical tree we see at the edges of our dreams before we drift off to sleep – and when we often have our best ideas.

However, imagination is not the exclusive purview of the artist. As humans, it’s our basic capability to be creative. It is a part of human instinct and behaviour and, like creativity, is often dismissed as fanciful – divorced from reason or judgement –from those that don’t understand its importance.

Imagination is powerful and even vital when it is used to help us re-create something of deeper meaning. In other words, when we use it to write a story and craft it to have a specific effect on a reader or audience. Or when we use it to challenge, subvert, or change the things we find our imagination.

In his ground-breaking book The Art Instinct: Beauty, Pleasure, and Human Evolution (2009), Dennis Dutton, an American philosopher of art, outlines the 11 characteristics of art – in other words the indicators (or what he calls ‘signals’) for art that are recognised across cultures and the world.

In the book, he says objects of art provide an imaginative experience for both the artist and the audience. He also states that the imaginative characteristic is perhaps the most important one in art’s overall make-up.

All art happens in a make-believe world, he writes. The artistic experience takes place in the theatre of the imagination.

Dutton is correct. The very same serial-killer-turned-out-to-be-a-twig incident is powerful enough to get you to write a horror novel about a fictitious serial killer that kidnaps a young protagonist – a novel that sends vicarious thrills through the spines of thousands of readers across the globe.

Creativity is, of course, another unique cognitive function and one that suffuses all human life, but perhaps one slightly less involuntary as the imagination or our imaginative responses to our environment.

While imagination allows us to fill in the gaps of our human existence, creativity similarly allows us to connect often ‘opposite’ ideas to create new ideas, concepts, or a tension between the two opposing ideas.

It’s what is often called the magic synthesis, a term coined by Italian author and psychoanalyst Silvano Arieti (author of Creativity: The Magic Synthesis) in the 1970s.

This synthesis is examined by the Sante Fe Institute in a 2015 paper called ‘How Creativity Works In the Brain’. It is what happens in the brain when ideas are brought together in a way necessary for creativity to happen.

In other words, the paper explains, the brain must be both divergent and convergent at the same time. It’s a process well understood by artists, who often meld together radically different ideas to create a new connection.

MUST-READ: 5 Steps To Creativity In Writing

Perhaps the crucial difference between the constructs of imagination and creativity, for writers at least, is that our imagination can produce sensations or images that stimulate the creative parts of our brain. Once we have that ‘image’ we can start turning it into a story, while consciously manipulating or re-arranging it to fit the context of our narrative.

Put another way, 0ne can imagine what it would be like to date George Clooney, but it will take our creative skills to write a whole novel about an ordinary person who dates a famous Hollywood actor.

Here are three exercises to help stimulate your imagination and creativity.

For each, find a quiet place where you can sit comfortably, close your eyes, let your imagination run free for at least 30 minutes.

After each exercise, you may want to jot down any unique or inspiring insights.

Ty to picture one of the following as your alternative family:

What was the experience like? Were you surprised by what your imagination offered you?

Imagine a table in front of you, empty except for a pure white tablecloth. At this moment, you are an artist arranging objects for a still life oil painting.

In this exercise, think of a character in your favourite book or short story. If you wish, you can re-read some of the story or novel.

I hope I’ve answered the question ‘What is imagination?’, explained the difference between imagination and creativity, and shown you why it’s important for fiction writing.

Ralph Fletcher, in his book What a Writer Needs (1992), says that as a writer ‘there are two whole universes for you to explore – the one on the inside and the physical one on the outside. Take your choice, inner or outer. Or best – both.’