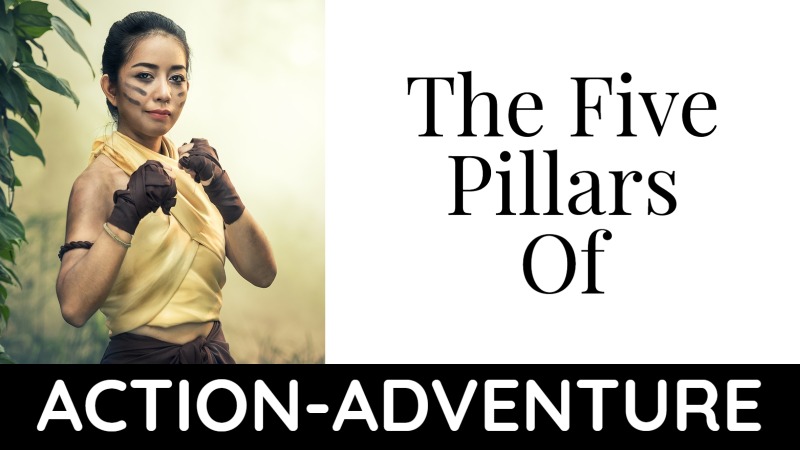 The 5 Pillars Of Action-Adventure

In this post, we will be exploring the five pillars of writing an action-adventure story.

Everybody loves this genre. It appeals to the escapist in us.

Who can’t imagine travelling to some far-off place on a special mission? Who doesn’t wish for mystery, magic, or romance?

An early example of an adventure is Robert Louis Stevenson’s Kidnapped. A young orphan journeys through the Scottish Highlands to reclaim his rightful inheritance.

Whether it’s a historical adventure, a trip to outer space or the deep sea – or time-travelling to a dystopian past – these stories thrill us. We love to watch and read them.

They take us outside our own lives and into the heart of adventure. We get to live out the hero’s journey.

What Is An Action-Adventure Story?

In this type of story, the hero seeks out adventure – or lands in it by chance. Thrown into a high-risk situation, they must show courage, endurance, and stamina.

The hero is never a passive participant in the story. They are on a dangerous mission or quest. The story often takes place in many locations or the hero travels to foreign lands.

The threat of physical danger is always present. The villain and various henchmen want to kidnap, kill, torture, or stop the hero. Often the hero is under mental pressure too. They must have nerves of steel.

The plot moves fast and there is action in every scene. It features hair-raising obstacles, nail-biting near-misses, and almost impossible odds to overcome. The hero must have skill or superhuman grit to survive.

There is always rising tension. Often the story races to a countdown-type climax. In standard adventures, the hero stops the bad guys and saves the day.

Why Write An Adventure?

Action-adventure stories can be satisfying and lucrative to write. It can become a multi-media  franchise. It could include books, video games, films, graphic novels, and merchandising. It works best as a series.

The 5 Pillars Of Action-Adventure

But, first you must master the basics. Here are the five pillars you will need when writing an adventure:

1. Holding Out For A Hero

Most action heroes live out their adventures alone. James Bond, despite his romantic affairs, is essentially a solitary figure.

The hero often has a unique job that allows for plenty of adventure. Often their skills are needed for a specific assignment or task.

The hero is often on a dangerous task or quest. High Road To China is a romantic adventure set in the 1920s. A down-on-his-luck American pilot must help a beautiful but spoiled heiress find her missing father.

As in many adventure stories, there is a ‘time lock’. The heiress has only 12 days to locate her father or risk losing her fortune to her father’s business partner.

The hero must always face a worthy adversary. The villain is often larger than life.

The hero often travels to far-off lands and mysterious lands. As a writer, you must create a unique and exotic location.

I hope these five pillars of Action-Adventure help you write your story.