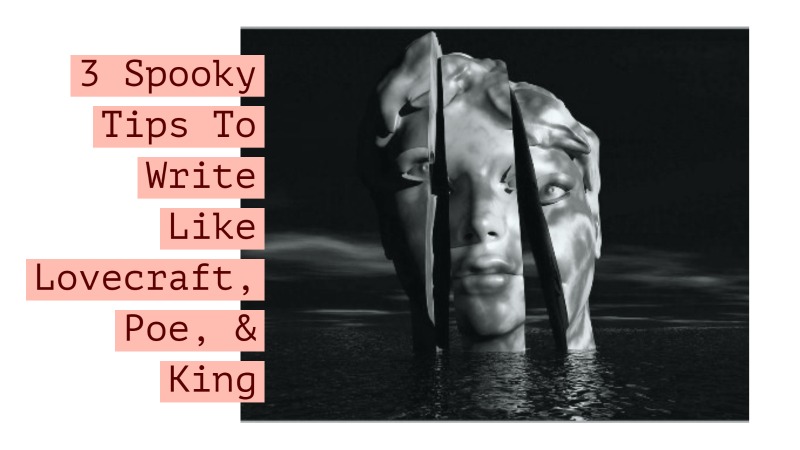 If you’re writing a scary story, there are no better writers to imitate than the masters of the horror genre. In this post, we’ve included three spooky tips to write like Lovecraft, Poe, and King.

Behold: the season of ghost, ghouls, and goblins is upon us again!

And, if you are anything like me, around this time you love settling into your favourite comfy chair to read a spooky story. But maybe this year you want to write a tale that will terrify others. The only question is… how do you go about it? There are so many incredible horror stories out there, so it’s hard to know where to gather inspiration.

In the spirit of Halloween, I’ve compiled three tips on writing horror I collected while reading the classic works of Edgar Allan Poe, H.P. Lovecraft, and Stephen King. I mean, why not start with some of the best of the best, right?

The Psychological Horror Of Poe:

Poe invented psychological horror, a foundational element that we’ll find present in each of the other writer’s work we’re analysing here.

So, what is psychological horror?

Great question! And one that brings us to our first point…

1. Get Into The Mind Of The Monster:

Poe’s two most famous stories share an important feature in common. Both The Tell-Tale Heart and The Cask of Amontillado are written from the perspective of the character who is themselves the source of the story’s terrifying events—they are the monster. In the first story a man murders an innocent old man, chops him up, and hides him underneath the floor; in the second, a wine-enthusiast gets a frenemy drunk and buries him alive.

And, even better, these stories are told by the monstrous characters in question in the first person. This means readers get to dip into the minds of people who commit heinous deeds. They get to find out how these characters justify their actions to themselves, humanising the characters and reminding the reader of that uncomfortable truth:

Rarely, if ever, does someone do something because they think it’s monstrous or evil. Real-life villains/monsters are not moustache-twirling cartoon characters doing bad things for no reason. Rather, they are ordinary (albeit misguided) people trying to do what they believe is best.

Monsters in horror remind us of the banality of evil, something more chilling than even the most vile acts committed by Poe’s characters.

The Cosmic Horror Of Lovecraft

2. Build Dread At The Existential Level:

This idea of the fearful unknown pervades all of Lovecraft’s work—and not just in that the monster is often left obscure or altogether unseen in his work. The question underlying whatever tentacled monstrosity the character faces is this: if something like this is out there, what other horrors might exist?

The perfect example comes from Lovecraft’s most famous story, The Call of Cthulhu. Cthulhu himself is vast, terrifying, and powerful in a way that all who see him risk madness. So, when we realise he isn’t even one of the elder gods worshipped by the cultists throughout the story, but simply a priest to some other entity whom Cthulhu himself fears and worships as a god, our minds reel at trying to imagine what an already unfathomable creature such as Cthulhu might worship! It’s not Cthulhu alone that disturbs us, but the existential questions his mere existence raises.

The Personal Horror Of King

Stephen King’s greatest strength isn’t his ability to conjure strange events or even stranger monsters. Nope. What makes King the foremost storyteller in almost every medium is his ability to craft and reveal a character’s innermost life.

3. Mine Your Protagonist’s Present Fears & Past Trauma:

King may or may not be familiar with Aristotle’s Poetics—I don’t know. Regardless, he never fails to apply Aristotle’s central principle of building a dramatic narrative around two elements:

That’s right, old Aristotle said, to get the audience to care about your protagonist, first you have to make them pity her or him. Once you’ve established what the character wants, introduce the fear of what will happen if the character fails.

King said something similar once: ‘Try to make them care, then turn the monsters loose.’

Hmm… sounds like the Pity and Fear approach to me.

So, how does King make readers care about his protagonists? Well, he takes a down-on-their-luck character and dangles their dream in front of them, giving the opportunity to pursue and achieve it. Take Jack Torrance from The Shining: he’s just lost his dream job teaching literature, he’s hurt his son in a drunken rage, and scared his wife. He’s terrified he’s turning into his own abusive alcoholic father. Then, he’s given the opportunity of a lifetime: a gig as a hotel caretaker during the offseason, meaning he’ll have plenty of time to reconnect with his family, and work on his writing!

And wouldn’t ya know it—once they arrive at the hotel—King does, in fact, release the monsters. And these monsters are perfectly calibrated to harass Jack in particular. They highlight his fears of becoming an abusive husband and father by conjuring just such a ghost from among their ranks.

This spooky season, take some pointers from all three masters of horror:

Well, that’s all for this time, folks!

Get out there and write some scary stories! Post some ideas, outlines, or scenes in the comments below. Who knows? You might get some encouraging feedback, or even inspire someone else with your brilliant concept.

Happy Halloween! I hope these three spooky tips to write like Lovecraft, Poe, and King help you write your story.