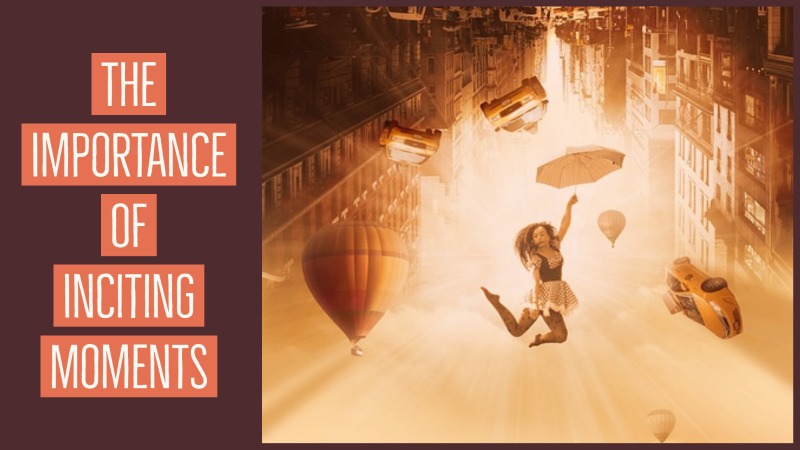 The Importance Of Inciting Moments

How do you start a story? Use this post on inciting moments, with examples, to help you write your book.

Have you thought about where you will start your novel? Do you have a treasure trove of inciting moments from which to choose? I hope you do.

When I taught our Writers Write course, I found that students seldom want to know how to write a perfect beginning. They think they already have that one in the bag.

Generally, they had decided that it will be a prologue, usually a flashback that will show the reader something he or she needs to know in the future. Then they start at the beginning with backstory. They must, because ‘the reader won’t understand the story if I don’t show who the characters are’.

Sound familiar? Don’t be too hard on yourself. We all start writing that way. We were taught exposition at school. We had to set up the story before we could begin. As a fiction writer you need to un-learn everything you were taught about story-telling as a child.

The Importance Of Inciting Moments

Adults want to read a book that begins with a bang. They want to land in the middle of the action, identify with the protagonist, side against the antagonist, and take a thrilling vicarious ride to a resolution.

We can learn how to do this. We don’t need to hang on to bad writing habits that bore readers. The backstory belongs in your character profiles, your timelines, and your first draft. After that, we have to get rid of most of it, and start where things change.

So what are the elements of a good hook?

As always, I believe that if you are a brilliant, gifted writer, you can write anything without help. You could also get away with a prologue, or a flashback, or backstory as a beginning for a novel.

However, if you’re the writer who wants to learn the craft, the first option is a better choice. You could also try a combination, such as an imagined, negative threat.

Please note that I deliberately chose examples from recent novels. It does not help you to base the beginning of your book on a novel that was written 30 or 50 years ago. Unless you have a time machine.

Look out for The Two Types Of Inciting Moments