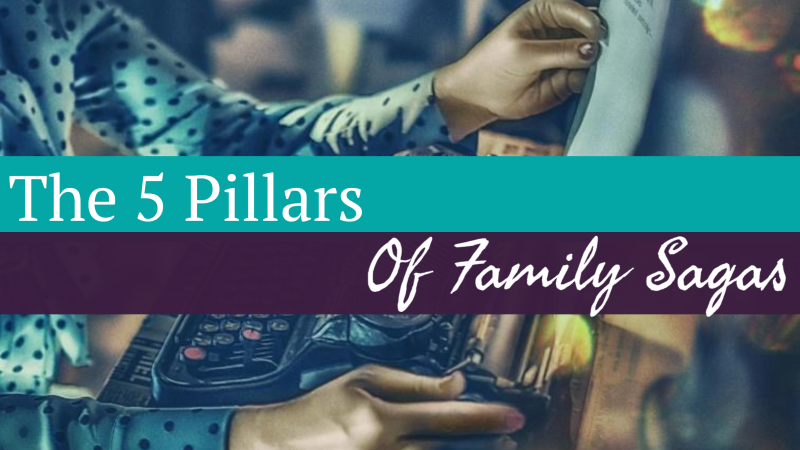 Are you writing a family saga? In this post, we define a family saga as a genre, track its popularity, and explore the five pillars of family sagas.

What Are Family Sagas?

Written on an epic scale, a family saga is typically a fictional drama focusing on one or more generation of a family, or interconnected families, and closely follows their fates, fortunes, and passions.

The genre tracks the characters through several decades, multi-faceted plots, and longer time spans. This mean these stories are often deeply historical in nature.

A typical example: Sacha, a handsome nobleman, his young bride, and infant son flee Revolutionary Russia. They seek shelter in London with his English cousin and his alluring wife. In time, he starts a jewellery emporium that swiftly becomes an empire. In time, Sacha falls in love with and eventually marries his cousin’s wife, with whom he has another child, a daughter. When this patriarch dies in the 70s, his two children, half brother, and sister battle bitterly for control of the family’s jewellery empire. And so on.

Goodbye To A Golden Age

Family sagas experienced a ‘golden age’ in the late 70s and into the 80s.  Many were aimed at a female readership and usually had strong romantic elements and often focused on women’s issues of the time.

More recently, Sheelagh Kelly’s Kilmaster Family Saga (1999 to 2003) Penny Vincenzi’s fictitious Lytton family in her Spoils of Time Trilogy (2000 to 2002), Barbara Taylor Bradford’s The Ravenscar Dynasty (2006 to 2008) have kept up the glossy and romantic tradition.

In his essay ‘The Decline of the Great American Family Saga’, writer Kevin Mims controversially attributes the demise of the genre to the breaking up of the traditional or nuclear family.

However, one could argue that family sagas have simply evolved and taken a new shape, form and flavour in the last two decades or so.

A good example is Ken Follet’s Century Trilogy (2010 to 2014), which focuses on historical rather than romantic elements.

George R.R. Martin’s Game of Thrones series (1996 to 2013) can also be seen as a family saga – with the important and interconnected Targaryens, Starks, and Lannister families – centred on war and dynastic power.

Rebecca Wells’ Southern ‘dramedy’ Divine Secrets of the Ya-Ya Sisterhood (2004) is a family saga, with a chick lit-or comic slant. Jonathan Franzen’s The Corrections (2002) is arguably a literary family saga.

The Twelve Tribes of Hattie (2012) by Ayana Mathis revolves around the matriarch of a black family and focuses on the destinies of her children and grandchildren. The author wonderfully combines family saga with domestic fiction in a powerful way.

Sara Krasikov’s sweeping multigenerational novel, The Patriots (2017), looks at the chilling effect of the Cold War on a Russo-American family.

As you can see from this last example, it is a radically different take on the family saga outlined as a typical example (Sacha and his glamorous jewel empire from the 80s etc.)

If you are looking to write a family saga of your own, here are five fictional pillars to consider.

The 5 Pillars Of Family Sagas

(1971), about a family divided against itself, or Drogheda, the farmstead in the Australian outback in Colleen McCullough’s classic The Thorn Birds (1977).

Setting also places an important role in these types of stories. Sidney Sheldon’s family saga, Master of the Game (1982), explores the diamond fields in South Africa in the late 1800s, while Nicola Thorne’s Champagne (1990) is set in French wine country. Barbara Kingsolver’s The Poisonwood Bible (1998) sees a displaced family living in the Belgian Congo in the early 60s.

Pillar #2 | A Strong  Cast of Characters

The family saga is definitely an opportunity to play with and even subvert some archetypes you may find in the genre.

Often there is a strong matriarch that starts the family dynasty. An example would be Emma Harte in Barbara Taylor Bradford’s A Woman of Substance (1979).

Equally, it could be a roguish male character who sets the saga in motion, like the handsome bootlegger Gino Santangelo in Jackie Collins’ Santangelo series, which started with Chances

Other stock characters include: the rebellious daughter, the sensitive son, a brave sibling who dies at war (from World War I to Vietnam, etc.), a cousin from the wrong side of the tracks, a faithful servant or nanny, a mysterious mistress, and a conniving half-sister or stepbrother.

Pillar #3 | Make It An Epic Series

As you can see, the family saga is often successful when created as a series.

The O’Malley Family Saga, written by former priest Andrew M Greeley is a good example of this approach, starting with the first book Summer At The Lake (1997) to last instalment, the Golden Years (2004).

As a side note, romance publishers Harlequin/Mills and Boon often use powerful and glamorous families in their category romances – Rivals To The Crown of Kadar (2014) by Kate Hewitt and The Disgraced Copelands (2015) by Jane Porter are just two examples of a series out of hundreds.

While family sagas are inherently historical in nature, they do often work very well when they incorporate other genres.

Virginia Andrews explored taboo issues, such as incest, in her family saga, the Dollanganger series, which started with Flowers in the Attic (1979). The popular series blends elements of gothic horror, mystery and romance to create a darkly compelling series.

In her epic novel, Bellefleur (1980), Joyce Carol Oates wove in magical realism into her saga of an upstate New York family and even revisionist or alternative history, with Abe Lincoln ‘faking’ his own assassination.

In another novel, similarly focused on an American family, the Oprah Book Club-choice We Were The Mulvaneys (1996), Oates explores how grief and loss can affect family dynamics; she also explores other themes of class, gender, and the role of guilt.

In the bestseller, Kurt Seyt & Sura (1992), Turkish author Nermin Bezman uses her ancestral family’s story to combine memoir with a family saga as she tells the fictionalised story of a Crimean nobleman and his love for a beautiful, wealthy Russian socialite.

The family saga gives the writer a wide canvas to explore history through a different lens.

In Herman Wouk’s The Henry Family series (starting with Winds of War, 1971), he places real historical characters in a fictional narrative to great effect. It is told from an American and patriotic point of view.

However, another writer may have used the conflict of World War II to create an anti-war stance.

The Poisonwood Bible examines, among other themes, the role of Christianity and colonialism in Africa.

In Nancy Thayer’s Family Secrets (2014), this prolific author looks at the relationship between three generations of women and focuses more on gender politics, while still bringing in historical and romantic elements.

Yaa Gyasi’s debut story, Homegoing (2016) explores themes of slavery and segregation through the descendants of a single female character and is told in a unique African American voice.

In her novel The Lions Of Fifth Avenue (2020), Fiona Davis adds a layer of mystery to a family saga, while touching on themes of sexism and a double literary heist.

If you want to apply these pillars of family sagas, try these exercises.

Write a short plot outline for a Young Adult novel.  Your premise is two teenagers are entrusted with a precious heirloom and learn about their family during a perilous journey to safety.

Or write about the sibling rivalry between two brothers from the viewpoint of an older sister.

Write a full-length scene about a female character in one of the following scenarios:

I hope these five pillars of family sagas help you write your multi-generational novel.