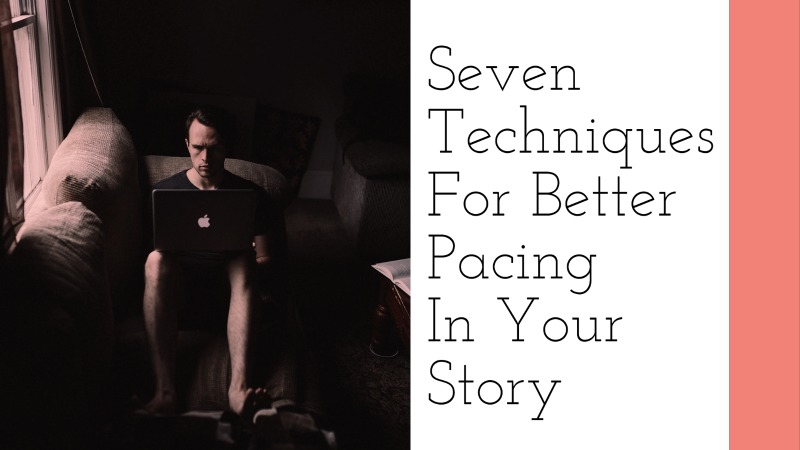 7 Essential Techniques For Better Pacing In Your Story

In this post, we look at how to pace your story. We have included seven essential techniques for better pacing in your story, with examples.

Do readers sometimes tell you that one of your scenes drags, but they can’t pinpoint where, how, or why? Do you sometimes hear a section of your story moves too fast? That you need to ‘stay in the moment’ and ‘let it breathe’?

In this article, we’ll identify the techniques you can use to better control your story’s pacing moment-by-moment, scene-by-scene. We’ll be using the functions of a TV remote as a metaphor for each technique.

7 Essential Techniques For Better Pacing In Your Story

When writing In Scene, Narrative time (the time it takes something to happen in the story) and Discourse Time (the time to read about the thing happening) are equivalent.

The only place we achieve this one-to-one ratio as writers is in dialogue exchanges and (to a lesser extent) in describing the characters’ actions.

Think of writing In Scene as the ‘Play’ button on a remote.

You should write most of your story In Scene. That said, you can have too much of a good thing. If your story is all action and dialogue, you risk fatiguing your readers. As a metaphor, imagine a rollercoaster that’s all loops and corkscrews with no straightaways, turns, or hills. It wouldn’t be fun, but overstimulating. Instead, we want to create a delicate balance of action and rest, peaks and valleys, tension and release.

Example:
With the sun sinking behind her, Susan trudged through the snowy woods. She looked at the sky, which was darkening with clouds and the sinking sun– the coming night.
‘Shoot,’ she muttered.
I have to get back on the main path soon. If I get lost now, well…

In a Summary, Narrative Time is greater than Discourse Time. We write about an event that may take a long time and, well… summarise it rather quickly.

Use summary anytime there is narrative info the audience needs to know, but it isn’t all that dramatically compelling.

You can think of writing In Summary as ‘Fast-forward’ on your remote.

We all know what a flashback is, so I won’t spend too much time describing it. But I will take a little time to describe when it is best-used and how. And if you’re just itching for more, check out this article where I take a deeper dive into flashbacks.

So, when is the best time to use a flashback? It’s wise to avoid flashbacks at all costs. The only reason to include a flashback—its only function— is to clarify an otherwise confusing moment in the story’s narrative present. It is there to give the audience only info that is 100% for them to grasp a moment’s significance that’s happening in the narrative present. That’s it. None of this traipsing down memory lane ‘just cause.’

We can write a flashback in Scene or in Summary, or even a mix of both. But it’s wise to keep it as brief as so the audience doesn’t forget what’s happening in the narrative present, so writing In Summary is your go to. Only the parts of a flashback that contain a key turning point ought to be rendered In Scene, and dialogue alone will suffice.

Basically, think of a flashback as ‘Rewind’.

Example:
When she’d first left early that morning, her sister had warned her of the weather and the potential to get lost in it.
‘Supposed to be bad. I’m telling you—it’s not safe.’

When we Stretch a Scene, we use a technique called Infolding, where the character retreats into their thoughts and feelings as the scene plays out.

So, Narrative Time is slightly less than Discourse Time.

When we stretch a scene, we focus on the character’s their thoughts, feelings, and visceral reactions to whatever is happening around them. Our thoughts and feelings often move faster than we can process them, so it’s okay to spend a little more time teasing out the character’s interiority. But a page or more of interiority—while acceptable in days past—is excessive for modern audiences.

You can think of Stretch as ‘Slow-mo’.

Example:
Her sister had seemed so old in that moment, and an image came to mind that made Susan uncomfortable: she envisioned, unbidden, what her sister would look like in death—and realized this image wasn’t far from what she herself would look like.

When we Pause a Scene, we stop the story altogether to get exposition or describe a character or setting. Narrative Time = 0 (because no time in the story itself is passing) and Discourse Time = X (however much time and space we dedicate to the description).

As with Stretch, Pausing is best used sparingly. In fact, if you are going to use it, make sure it’s to emphasise a story feature that is both:

Pause is, well— like the ‘Pause’ button. Or–better yet—it’s almost like a ‘Pause’ and ‘Zoom-In.’ Its function is to emphasise, to draw attention to elements that are most important.

Example:
Susan saw in that prospective coffin her sister largely as she looked now, only the streaks of silver in her hair had spread and deepened, as had the lines running from the edges of her nose to the corner of her mouth.

An Ellipsis is when the story skips ahead in time and often to a new location. Writers use either a dinkus (***) or white space and an un-indented first paragraph to indicate an Ellipsis. And, while it’s fine to use a dinkus, I find white space transitions much less obtrusive. Just saying.

In Ellipsis, Narrative Time = X (whatever amount of time has passed) and Discourse Time = 0 (We spend no time writing about what happened between the end of the last scene and the beginning of the new one). My favourite parallel is the Later… bubble often at the top of a comic panel used to indicate a time skip.

Ellipsis is like Summary because it is a time saver, the difference being that we only use Ellipsis when whatever happens between the end of one scene and the beginning of another is neither interesting nor important for the reader to know to understand the story.

Think of this as the ‘Skip’ button.

Example:
As her reverie faded, Susan was startled to discover a sign for the forest path she’d been looking for. She sighed and set off in the direction the sign indicated.
(White Space Transition here; next paragraph is not indented)
When she noticed the curling smoke from her chimney, she followed it with her gaze down to the front porch where her sister stood bundled, waiting for her, cocoa in hand.

A few quick images or scenes in a sequence with time gaps between them. It’s actually like a montage in all the old cheesy 80’s films—just, ya know sans music.

Using our TV remote metaphor, you can think of this technique as hitting the ‘Skip’ button then ‘Play’ a few times until you get to the desired scene.

Example: (An alternative to the Ellipsis from the previous example)
The already chilly air grew colder still. Snow in her eyelashes, sluicing into her collar. An eruption of goose bumps across her skin. Trees all around her—once familiar– transformed by snow, then made familiar once again. And the ever-present, endless crunch-crunch-crunch of her boots in the snowdrifts.

All right. Now that you’re familiar with the techniques themselves, here’s a simple rule of thumb for when and how to use them:

Well, that’s all. Try using each of these techniques to construct a full scene in the comments, just like I have in my examples!