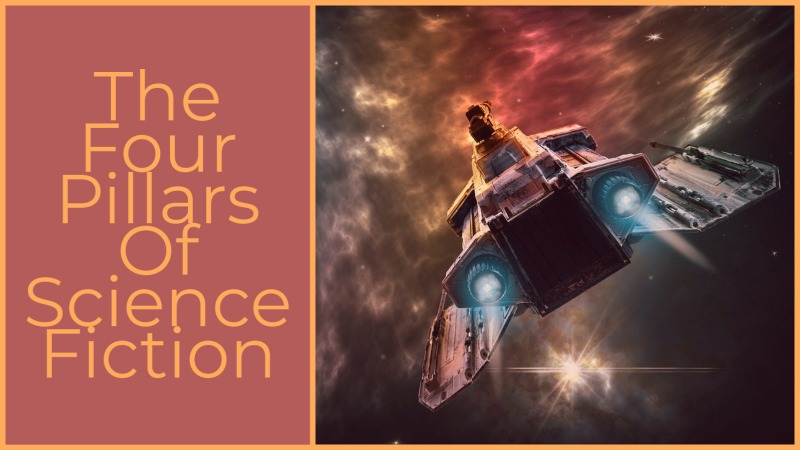 The 4 Pillars Of Science Fiction

We have written about these:

In this post, we look at the four pillars of science fiction.

Are you a die-hard Sci-Fi fan, just itching to write your own intriguing entry in one of the oldest speculative genres?

You just take a cool story idea and put it in a future setting where everything’s chrome and neon-coloured, everyone uses laser guns and laser swords, travel is interplanetary (or interdimensional), and the bad guys are all robots or aliens or… *gasp* alien robots!

Done and done! Just slap that coat of paint over any old story premise, then pack up and call it a day!

Except… I’m not sure that’s what Sci-Fi is all about.

Just as making your villains goopy monsters and your fight scenes ultra-gory doesn’t make your story a work of genuine Horror, neither does making all the weapons lasers and the cars fly make the story Sci-Fi. All you’ve done at that point is given the story a certain aesthetic, which (although a bit more fun) is superficial; it’s just a veneer.

Think about it, would Pride and Prejudice be truly a different genre (Sci-Fi) if it took place on, say… Mars? And maybe the coaches were all pulled by robot horses and the handsome militia men were fighting a war against the orbiting rebel satellite colonies? (wait… that isn’t bad—I call dibs!)

Alas, as long as the key plot elements remained intact, like the cultural milieu of a patriarchal society hindering the budding relationship between Elizabeth and Darcy, it would remain a Regency Romance.

So, what the makes something a genuine work of Science Fiction?

Let’s see if we can analyse it using the four pillars of science fiction.

The 4 Pillars Of Science Fiction

Now, it’s not enough to just make a more advanced looking version of an existing piece of technology—the tech must be substantively different in how it functions, and in how it affects the world at large.

For instance, although we call these weird little metal and glass rectangles we’re addicted to ‘phones’, the truth is these are something altogether different—some science-fictional craziness by the standards of life before their existence. I mean, if I’d seen a movie featuring a smart phone back in the mid-90s, it’d have been called something way cooler—an Omni-device, or something. ‘No way,’ I’d have said.

And smartphones are not a terrible example of the tech I’m talking about. I bet if you take a moment to consider all the ways smart phones have reshaped our world, you’d be astonished.

That is the effect we’re looking for advanced tech to have in a work of Sci-Fi—we want it to be something that alters the very course of how entire societies function.

How might society be different if a Google Glass like product had been allowed and mass-produced? Now, zoom in a bit on a single character within this world. Maybe someone who has opted not to use this tech for ethical reasons, or someone who has become reliant on it. What premises occur to you based on that one simple concept?

And, just to define my terms quickly, by policy I mean any sort official rule or plan of action applied by a group, corporation, organisation, or government.

Anyway, I believe that this pillar is at the heart of a lot of the best Sci-Fi.

And, although Extreme Policy can be directly tied to Advanced Tech in a Sci-Fi story, it doesn’t have to be. I won’t get down in the weeds and argue about this, but consider whether Advanced Tech is the impetus for the brave new worlds of The Hunger Games and The Handmaid’s Tale

Building on our previous prompt, what kind of Extreme Policies might be created and enforced in a society shaped by the Google Glass-like tech? For instance, would the tech only be available to law enforcement? Would all citizens be required to upload their ID into a cloud equipped with facial recognition software? What might the unintended consequences be of these Extreme Policies?

‘The Other’ is a concept you run into a lot in the social sciences. It refers to anyone whom the socio-cultural milieu has alienated—who has been marginalized and/or disenfranchised.

It is one of the most important pillars of science fiction writing.

Often these people are those who have refused to adopt advanced tech or who use the advanced tech in a way society deems unhealthy. Perhaps they are (or are infused with) the advanced tech—like robots, cyborgs, androids, et al. Or maybe they are literally aliens—whether from another country or another planet. Regardless, they are treated as Them in the Us vs Them equation.

Maybe you’re picking up on another, bigger formula:

Advanced Tech leads to Extreme Policy, which alienates some members of the society, making them The Others.

Continuing to build on the previous two prompts, ask yourself: who would be The Others in this concept/premise combo? How so

The last pillar is yet another outgrowth of the ones that came before it, and it’s all a matter of your personal perspective as the author.

Well, depending on your perspective, your story could be described as a Utopia or a Dystopia.

Dystopia: Whoa… we messed up big time. We have to fix this mess.

Of course, you could paint your story in shades of grey by showing how the tech and policy aren’t inherently negative. It’s mostly how people abuse them that leads to problems.

Using everything you’ve come up with until now, try to determine whether your society is Utopian or Dystopian, then determine the appropriate protagonist. If you want to get ambitious, you could create a multi-plotted story about a Policy/Tech maker trying to protect and maintain their Utopia, and the Othered person who is trying to bring it all down because the Policy/Tech has made their world Dystopian.

If you are looking for more information on science fiction please read:

And there you have it: The Four Pillars of Science Fiction!

Sci-Fi master, Orson Scott Card said, above all, Sci-Fi poses the question: Who are we now and—based on our current trajectory—what might we become?

Use this question as a guiding light when crafting your next Sci-Fi masterpiece! But most importantly, challenge yourself as you work in this deeply philosophical genre, and have fun!