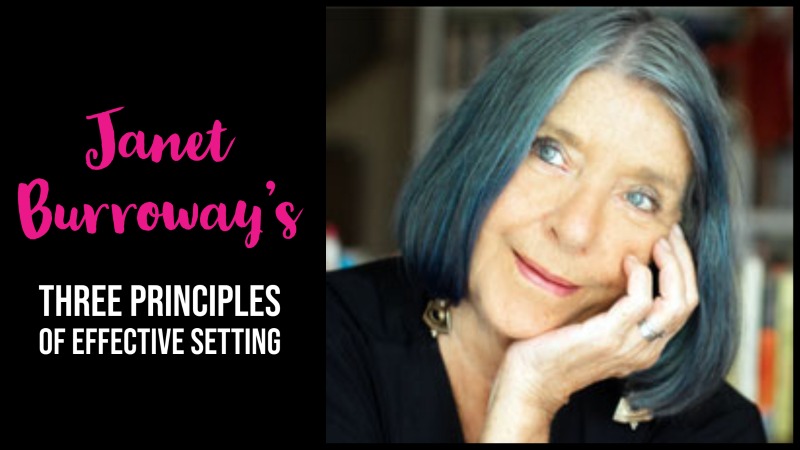 In this post, we look at how a story works in a place through Janet Burroway’s three principles of effective narrative setting.

If you haven’t read our last article on Burroway, you may be scratching your head right now and thinking, huh? Who’s this Burroway? So, I’ll quickly recap:

Who Is Janet Burroway?

While Burroway may not be a household name among avid readers, she is one among many writers and students of writing craft. With her book, Writing Fiction, Burroway did for contemporary fiction craft what Aristotle did for Classic Greek Drama with his Poetics. She codified and described (not prescribed) what works and what doesn’t in prose fiction.

Ready for some more titbits of craft wisdom from Janet Burroway’s Writing Fiction? Then let’s get right into it!

We are defined by the context in which we live—what, in fictional terms we call our setting. Place, time, climate, values and traditions, all coalesce to form the circumstances necessary to shape us.

If setting’s defining influence is true of real people, it’s doubly true for fictional characters. Just as dialogue must be purposeful and concise, so too must a story’s setting be intentional and relevant.

So, how do we determine what is the best setting for our story? Let’s take a closer look at what setting affords and techniques to take advantage of those opportunities.

The writer’s tone is the element that binds and colours all three of these components at once. This is because each component carries with it certain connotations.

However, the story’s overall mood would be determined by the connotations of the language used to describe these components. Depending on the writer’s narrative tone, the piece could have a mysterious and sinister atmosphere, or an atmosphere rife with magic and romantic possibility. A

dd to the period and place, the more specific categorical factors such as weather and the time of day, and we see that a single setting can potentially convey several, very different atmospheres. We want to calibrate them all precisely to fit our intended atmosphere for the setting.

Let’s take our example setting from earlier: our story takes place at an isolated, rundown Victorian mansion located in the English countryside. It’s midnight and there’s a thunderstorm raging. Now, what if we added to that picture an attractive young woman. She pulls up to the mansion in an expensive car and gets out wearing the latest Parisian fashion despite the weather. Even without knowing her reason for being there, the disharmony between character and setting creates an implicit conflict. Say that we learn from her thoughts that she loves Gothic architecture because it’s featured in her favourite books.

Even if she can’t see the disharmony between her naive perception and grim reality, we readers do. And we can already speculate about where things are headed and how they might turn out. All this from only a brief description of the setting and some cursory characterisation of our protagonist.

While symbolic place can lend dimensionality to a story, it is easily botched. The key to creating a symbolic place is to imbue the location with symbolism subtlety and unobtrusively.

Often beginning writers neglect the dramatic potential of their setting. They choose a place, time, and mood they find compelling or familiar, whether or those elements are significant to the character and her journey.

But what we want is a setting that heightens conflict, and creates emotional, symbolic, or thematic resonance. By understanding all the techniques for creating and conveying fictional setting at our disposal, we make sure the setting does multiple things at once.

If where and when you live is what shapes you every moment of your life, it also informs every major decision you make. So, while fictional setting may be the story’s background, it is a foreground concern.