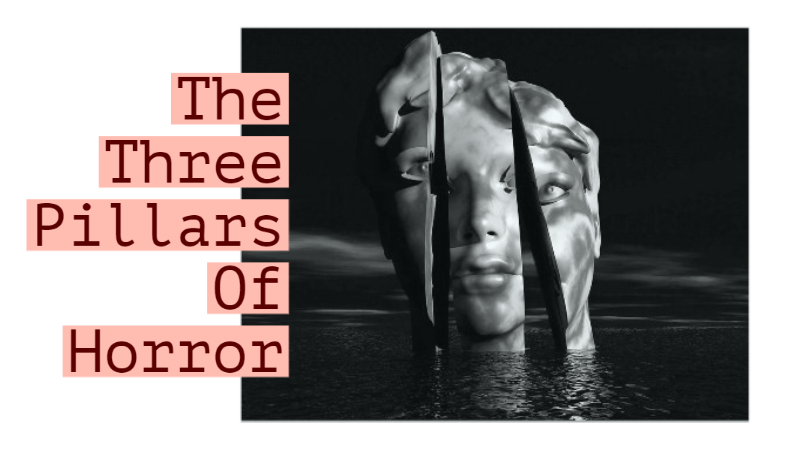 The 3 Pillars Of Horror

Have you ever tried to write a horror story and found the result wanting? In this post, we look at how the 3 pillars of horror can improve your horror story.

We have written about:

In this post, we explore the three pillars of horror.

Horror As A Genre

It’s a difficult genre to do well. But why? All you have to do is create a monster and put it in a creepy location. Then you make a bunch of dumb jerks go there and let the monster pick them off in gruesome ways, right?

The problem with that approach is… it isn’t scary. Intense? Spectacular? Sensational? Sure. It’ll get your blood pumping, just not from fear.

Instead, some part of us might feel these dumb jerks are getting what they deserve. We might even laugh at their horrible fates and become morbidly curious about who will die next and how.

Before we look at what makes a Horror story scary, consider Stephen King’s method. He suggests the opposite of the one outlined above—the one we’ve mistaken for horror for so long.

King says: ‘I create sympathy for the character, then I cut the monster loose.’

With that in mind, let’s look at The 3 Pillars of Horror.

The 3 Pillars Of Horror

A Horror protagonist is the opposite of an Action Hero. An Action Hero is someone we want to be. They’re a capable and powerful person who always does the right thing. But a Horror Protagonist is an ordinary person–a vulnerable victim of trauma hiding some secret shame. These are all things we fear being, so we can’t help but feel sympathy for someone in such circumstances.

We also need to know these aspects of the Horror Protagonist so we can figure out what his Shadow is. The Shadow is the Protagonist’s hidden, secret shame caused by their trauma. His Shadow has haunted him long before he stumbled into a haunted house or met any monsters.

In fact, the concept of the Shadow, of Trauma + Shame + Mortal Fear, should inform every level of the story: character, setting, and monster design. The Character must first have a Shadow, the Setting must remind them of the Shadow, and the Monster ought to embody it. This principle, wherein every story element works together to create a single feeling, is what Edgar Allan Poe called, ‘The Unity of Effect’.

A Horror setting is an isolated, disempowering location with a mysterious, dreadful past. These come together to remind the protagonist of his Shadow.

To make the setting even more effective, limit the protagonist’s perception to make them more vulnerable. Often writers do this with fog, darkness, right angles, and closed doors. These all pump up the suspense and mystery as well because… who knows what’s hiding in the night’s fog, around the corner, behind that door?

Heck, the setting may even be a monstrous entity with its own agenda. It may want to kill the protagonist, to banish him, or force him to carry out some perverse, atrocious act.

And, if you want to take a more psychological route, make the terrifying events of the setting manifestations of the protagonist’s Shadow being projected onto the real world.

The monster is a perverse, threatening menace embodying the protagonist’s Shadow. It personifies at least one or more ‘deadly sin’ or sociocultural taboo.

For instance: The Protagonist is dealing with guilt over the death of his wife by suicide after she found out he was cheating. He is haunted by some eerily attractive ghost or monster stalking him. This monster embodies his shame over how he let his lust control him.

Now let’s put all three pillars of horror together using an example from earlier:

And there you have it—The 3 Pillars of Horror in action!

Now it’s your turn—give it a shot and post your story teaser in the comments.