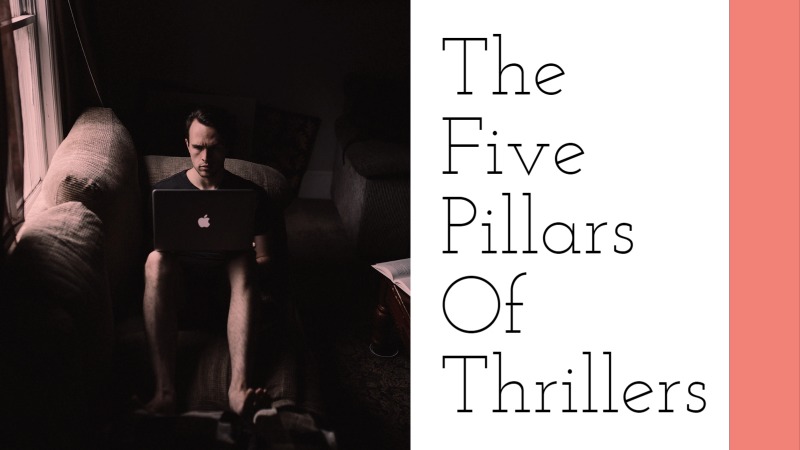 The 5 Pillars Of Thrillers

Are you writing a thriller? In this post, we look at how the five pillars of thrillers can improve your story.

In this post, we will be exploring the five pillars of thrillers.

I have an embarrassing confession. This is one of several attempts I’ve made to write this article.

Well, as I was going through an early draft, looking for areas in need of revision, I realised something. I had only described one subgenre of the massive mega-genre that is the Thriller.

Now, yes—the Crime Thriller is the most well-known sub-genre of Thrillers. But– an article about that one cross-section of the Thriller Pie? That wouldn’t cover it. I’d be neglecting Action, Medical, Military, Political, and Psychological Thrillers. The list goes on.

But each of these sub-genres has such differing tropes! Of course, there was no way I could write an article that covered them all. So, I focused instead on what they all had in common. I asked myself: what was the trunk of this tree that these subgenres branched from?

They share little in common in the way of plot points or character archetypes, as most genres do. Instead, what makes a story a Thriller, no matter the subject, is the stable of emotions the writer tries to evoke.

That is: Excitement, Horror, Intrigue, and Tension/Suspense.

Now, if many of these words sound like synonyms, I get it. But they do have varying shades of differences between them—some subtle, some stark. And what they all share is they try to evoke the same biological response from the audience. They quicken the pulse. They try to—you guessed it—thrill!

So, we won’t be looking at specific tropes, structures, and characters, as I would usually do in a genre post. Instead, we’ll look at techniques writers use to evoke specific emotional reactions. And each is meant to contribute to one ultimate goal: making the audience’s pulse pound.

The 5 Pillars Of Thrillers

This sounds silly, I’m sure. But using excitement in storytelling is more nuanced than it first appears. Here, excitement refers to anything we look forward to with positive anticipation.

This is a key feature of Action Thrillers. Take the work of Christopher Nolan, for instance. There are iconic action set-pieces in each of his films. These moments are thrilling because they allow us to see and experience things that can’t happen. I’m talking about: a mid-air plane heist, a city being folded in on itself, a car chase where the drivers move through time differently. I’d bet the moment you read each of those descriptions, some fantastical images came to mind.

So, excitement in an Action Thriller gets our pulse pounding by showing us something implausible (or even impossible), provoking us to wonder “how on earth is this going to play out?”

Compared to the last element, this is the other side of the proverbial coin. Rather than a set piece or event we are looking forward to, horror depicts something we wish we hadn’t seen–something morbid or taboo. This element is most likely to be featured in a Psychological Thriller, like The Silence of The Lambs.

For instance: when we see someone hard at work at the sewing machine, at first, we think nothing of it. But the moment we realize the material they are working on is flayed human skin? Yeah, the visceral revulsion we experience in that moment is guaranteed to get our hearts pumping.

We are intrigued whenever we are presented with a mystery:

Who killed the protagonist’s lover? How did they do it? And why?

Now raising these kinds of questions isn’t enough to get the audience’s blood pumping. Nope—that’s only likely to happen any time the audience spots a clue or makes a connection between clues leading to a potential answer to the mystery. We are biologically programmed from birth to look for patterns and solve complex problems. And when we do so, our brain gets all kinds of thrilled, releasing dopamine, which increases our heart rate.

Agatha Christie said: ‘[A detective story] has, too, the tonic value of a puzzle – a challenge to the ingenuity. It sharpens your wits – makes you mentally alert. To follow a detective story closely you need concentration. To spot the criminal needs acumen and good reasoning powers.’

This pillar is most often featured in Crime Thrillers for obvious reasons—these stories are almost always Whodunits. Mysteries are also often used in Medical Thrillers wherein a mystery disease or illness is substituted for a crime.

Tension and Suspense are often thought of as being interchangeable. And, while they are so closely related– almost inextricably intertwined– they are distinct concepts.

Tension is something that happens between two or more characters when they are at cross-purposes—that is, when they want the same thing, or things which are mutually exclusive. Tension first arises when one or both characters realizes the other’s intentions (and that they pose a threat to their own goals). Then that tension ramps up when either character makes a bid to achieve their goal. A splendid example of this is the coin toss scene from the film No Country for Old Men, adapted from the novel of the same name by Cormac McCarthy.

Murderous sociopath, Anton Chigurh asks a gas station attendant to pick heads or tails, hinting at his intent to kill the attendant if the coin doesn’t land in his favour. The tension between these characters is palpable the moment the gas station attendant puts this all together. And that tension only ratchets up every time the man tries tacitly to persuade Chigurgh his death isn’t necessary.

Suspense enters the scene the moment we see Chigurgh flip the coin. Now, the all-important question in storytelling is raised: what’s going to happen next? Will the attendant win the coin toss and his life? Or will he lose? Even if he wins, will Chigurgh honour the results? We have seen him kill without a second thought earlier, so… who knows?

If it helps, think of a balloon being blown up. For each puff of air, we create literal and figurative tension. Suspense enters the equation once the balloon is big enough. It could pop at any moment—but we don’t know when. Or it could spring a leak and deflate! Or it could get so big the person holding it loses their grip, letting it go, so it flies away. We are sure something is about to happen; we just don’t know what and we don’t know when.

And there you have it! If you can use these pillars at every opportunity in your story, you are virtually guaranteed to get the audience’s blood pumping, and a pounding pulse means plenty of thrills!

I hope this post on the five pillars of thrillers helps you write the perfect story.

Suggested reading: 50 (Or So) Fabulous Resources For Crime Writers