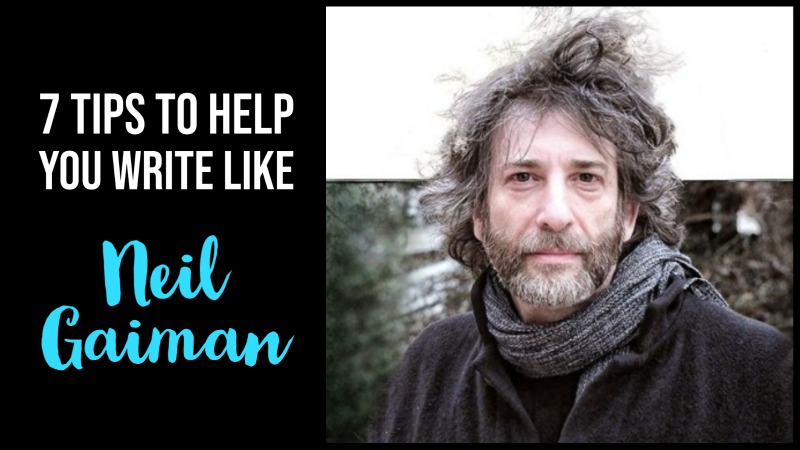 Are you a Neil Gaiman fan? In this post, we give you seven tips to write like Neil Gaiman.

Neil Gaiman is everywhere these days. He’s always had a presence in comics and fiction, but now he’s got adaptations of his work coming out regularly in film and television, each as successful as the last!

This got me wondering: what are some of the defining characteristics of Gaiman’s work? What approaches and strategies does he use to create stories that are such perennial favourites?

So, I signed up for a graduate level literature class examining Gaiman’s novels in depth and took Gaiman’s Masterclass, taught by the man himself.

Now, I’ve compiled the key takeaways from all that research here so you can reap the benefits, without all that extra effort.

Want to bottle some of Gaiman’s magic and use it in your own writing? Then read on!

According to Gaiman, all fiction is Fantasy, some authors are just more honest about that fact than others. His evidence? He says a story is an account of how someone who doesn’t exist, does things that never happened, in places that never were.

Yet, he insists that all great stories are about sharing whatever truths the author has learned about life and living well. In fact, Gaiman claims he couldn’t get anything published until he started being vulnerable enough to convey the truth, as he saw it, in his own work.

Gaiman describes his novella The Ocean at the End of the Lane as a pseudo-autobiography because, while none of the stories events actually happened to him, the character he wrote is a version of himself at 7-years-old.

Be brave and inject your work with something of yourself, of what you believe to be true about the world.

You can do this by trying to convey an emotional or intellectual insight you’ve had, via a fictional character in fictional circumstances.

Whatever you do, Gaiman suggests few people will want to read your work if it conveys ideas or feelings you don’t passionately believe in.

One of the writing techniques Gaiman talks about most is his concept of Composting.

He takes his major life experiences– his thoughts, feelings, story concepts and premises– and writes them down in the little notebooks he keeps with him everywhere he goes.

Seems simple enough, right? But Gaiman insists that by intentionally and explicitly noting such things, they are able to break down in his imagination. He may revisit a notebook years later and find suddenly that everything has composted enough to be fertile for a strong story to grow.

Gaiman began writing The Graveyard Book after seeing his son riding his trike through a graveyard. The image of a child happily playing in a graveyard made him think of Kipling’s Just-So Stories, about a boy raised in the jungle. What if a child was raised by ghost’s in a graveyard? he wondered.

Well, Gaiman started writing the story, but realized he wasn’t a strong enough writer yet, nor had the idea been given enough time to compost.

So, for the next twenty years, he visited the graveyards of every city he went to while on book tours and took meticulous notes. Once all that data had composted enough to create fertile ground for a story and he had matured enough to write it, he began The Graveyard Book.

Like, Gaiman, always be on the lookout for inspiration from your own life and thoughts. Keep a notebook on you so you can get ideas down while their fresh… then let them rot over time.

Keep returning to those notebooks over time and see if those ideas have composted. Maybe a great story will begin to grow!

3. Use A Classic Storyteller Voice

Gaiman loves using a Classical Omniscient POV (point of view) for his story. This is the fairy tale narrator, the one who can fly around the story world and tell you its history, the character’s thoughts—even give you a peek at the future! This POV is a godlike character unto itself and, as such, has its own thoughts and opinions about the characters and what they do.

Honestly, this POV has been out of vogue for some time, but Gaiman has used it to great effect, adding humorous commentary to his stories.

And, while he doesn’t always use this POV, perhaps Gaiman favours it because it is so flexible. As he says, his favourite part of writing is getting to play god—and Classical Omniscient POV’s unparalleled flexibility really allows him to lean into that aspect of writing.

Stardust is written in the voice of a narrator who knows everything about the characters and their world—and who even likes to add in their own funny aside. To create this narrator, Gaiman said he adopted the persona of a sagely middle-aged woman who probably served as the town Shaman.

Write a story wherein the narrator is just as much a character as any of the named characters. Give them a specific personality which you convey through their word choices and figures of speech. This personal narrator could just be you yourself! The key thing to remember is to create the sense that your story is being told aloud to the reader who is right there in the room with the storyteller. Make it feel as cosy and personable as possible.

4. Rewrite A Myth Or Fairy tale

A queen tries to keep a prince from awakening a dead princess with a kiss.

He asked, but why? Well, what if the queen really was the hero? What if the Snow White was so pale because she was actually undead? A vampire even? Wouldn’t that make the prince a villain too? A necrophile prince trying to awaken an undead vampire bride?

Whoa! If someone described Gaiman’s version of Snow White, would you ever recognise the source material in it? Probably not.

Give Gaiman’s revisioning process a shot!

Take a favourite fairy tale and really dig into it to see what bizarre associations and explanations arise in your mind, then write that version of the story.

The results will surprise you, I promise!

5. Put A Fantastical Twist On A Familiar Place

Gaiman claims to always begin his stories by outlining the major elements of his fantasy world, then he researches the real-world analogs to elements in his stories.

So, instead of copying Middle-Earth or Narnia, he suggests looking around at our world and subtly changing it. He recommends writers take their native situation and exaggerate it, guessing the effects of those exaggerations on their world.

seems like it takes place in the US, but Gaiman says this is actually not true. He insists that, because his America is one in which gods come into existence and grow more powerful the more people believe in them, that the world can’t be the same as ours.

Take a place you’re familiar with, and subtly change one thing in a fantastical way. Next, work out all the implications of that single change. You’ll be surprised at how far out the ripples will be felt in your world, just how many things will change. And there you have it—your very own Gaiman-esque fantasy setting!

Gaiman says he doesn’t hold with writers who preach the ‘Show, Don’t Tell‘ dictum. Because the author is the god of their world, they get to do what they want as long as readers find it engaging.

The two places this shows up most prominently in Gaiman’s work is in his character introductions and his setting descriptions. Spending pages introducing a character and their home for pages on end may have died in the 19th century for everyone else, but Gaiman is fighting to keep this tradition alive.

Stardust opens with a whole chapter on the town’s history and a character history–not for the protagonist, but for his father!

Begin each scene by describing the setting in lush detail; introduce each character with a description of their appearance from head to toe.

Is this approach antiquated? Yes. Will it make your writing feel more like Gaiman’s? Also, yes.

Just be mindful that famous authors can get away with a bit more self-indulgence than the rest of us,

7. Finish What You Start

It sounds simple, but Gaiman says the single most important piece of advice he got was to finish every story he started, even if he knew it would never see the light of day.

Because by finishing a story we learn two things essential for every writer:

Self-discipline and where we are weakest in our craft.

But, by finishing what you start, you’ll learn to write even when you don’t feel like it, and you’ll have a much better grasp of where you shine and where you struggle at each leg of the race that is writing a story.

And with that, get out there and write some stories… Gaiman style!

If you want more advice from Neil Gaiman, read

Explore: Writing Advice From The World’s Most Famous Authors