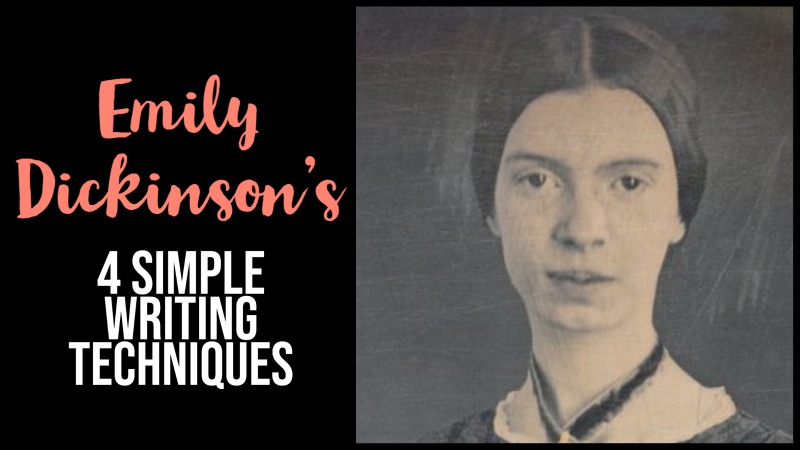 How To Use Emily Dickinson’s 4 Super Simple Writing Techniques

Do you want to write like a master poet? In this post, we look at American poet, Emily Dickinson’s four super simple writing techniques.

Given her tremendous effect on the poetic landscape, it is hard to imagine anyone being unfamiliar with Emily Dickinson. But, just in case, I’ll share a little about her here.

Dickinson was an American poet, unpublished in her lifetime, who nonetheless bound over 800 of her 1100 poems into small booklets called fascicles. She kept these booklets largely private, only deigning to share her work with her closest friends and family. These booklets were discovered and published posthumously.

Dickinson has become famous as a poet of delicacy and decorum at the formal and technical level, yet capable of explicating complex emotions and ideas using concrete metaphors from her day-to-day life.

Today, she is regarded by many to be one of the great American poets.

In this article I will enumerate and examine four of the most notable features of her work. I encourage you to try them out. See what effect the tools and techniques of a literary legend lend your own work!

How To Use Emily Dickinson’s 4 Super Simple Writing Techniques

Dickinson rarely strayed far from a domestic existence with her parents. The longest she did so was the year that she attended seminary. As such, her personal experiences were hardly wide and varied. However, she easily made up for this with how deeply she plunged into the experiences she had, emotionally and philosophically. Often, in her poetry, she would take a daily task or happening—gardening or the sunrise, for instance—and use them as a catalyst and entry point into greater subjects.

In her poem, I’ll Tell You How The Sun Rose, Dickinson begins by describing a sunrise, but ends by turning toward a reflection on the uncertainty of perception. That’s right, she goes from sunsets to phenomenology, in a mere 16 lines!

Start a piece of writing by describing something simple and mundane to you, then push this topic to see what greater insights you can extrapolate from it.

While she did explore other types of formal poems, Dickinson primarily wrote in common meter. That is, she wrote using four-line stanzas with an alternating rhyming pattern of ABAB, with eight syllables on the A lines and six syllables on the B lines. Often the stress would also alternate from unstressed to stressed for each syllable, giving the poem a simple consistent rhythm. At the time, common meter was used primarily in nursery rhymes and hymns. It’s likely Dickinson noticed this form’s flexibility, that she realised it’s incredible potential given that it could be used in settings both homey and sacred, and took advantage of that fact.

Look at the first four lines from ‘I’ll Tell You How the Sun Rose’:

‘I’ll tell you how the Sun rose –
A Ribbon at a time –
The Steeples swam in Amethyst –
The news, like Squirrels, ran –’

While she does use common meter as a guide for the poem’s form and structure, notice how she isn’t so strict with it that it stifles the poem. Dickinson is fine with having one syllable too few on the first line. She isn’t worried about the second and fourth lines only barely rhyming (if at all).

Try writing a series of poems in common meter and note what kind of creative solutions this formal restraint produces in your work. The more you use this form—or any form—the more naturally you’ll be able to wield it over time.

Like Dickinson, as long as the sound and flow of the poem remains natural sounding, don’t worry too much about getting the meter, stresses, and rhymes exactly perfect.

Dickinson capitalises many nouns in her work for emphasis and—sometimes—to personify them. This is something she probably picked up from her grammar book, William Harvey Wells’ Grammar of the English Language. However, Dickinson took what was intended to be a simple rhetorical technique and elevated it to art in her poems.

Let’s look at lines 4-8 of ‘I’ll Tell You How the Sun Rose’ and note the effect of the capitalised nouns.

‘The Hills untied their Bonnets –
The Bobolinks – begun –
Then I said softly to myself –
‘That must have been the Sun’!’

If you read it aloud, you might find that—without thinking about it—you naturally stress the capitalised words, likely as Dickinson intended.

Copy down some of your favourite poems from Dickinson’s oeuvre, but omit her capitalisation. Does it look or feel substantially different on the page? Try reading it aloud from both the original and modified versions. Do you read it differently one way or the other? Finally, try capitalising nouns for emphasis (or to show personification) in your own work and note the effects.

4. Dashes At The End Of Lines:

This may be the technique that is most readily plain in Dickinson’s work. While using dashes in place of traditional punctuation was a practice commonly taught and employed at the time in certain types of writing, she is the first poet to depend on this technique throughout her work. The intended effect was probably to create a more pronounced pause in reading than a comma might produce, thereby allowing her greater control of the poem’s pacing.

Look at lines 9-12 of our poem, and note the effect of the dashes while reading aloud:

As with our earlier example, try copying one of Dickinson’s poems and switch out the dashes for the more traditional punctuation—the comma—and note the effect on the look of the poem and the pacing of it when you read it aloud.

Try implementing dashes in your own poem whenever you want to create a longer pause than a comma might afford.

Dickinson didn’t title her poems, which later led to editors using the first line of each poem as its title. This was a happy accident in her case. Later poets have emulated this technique because it is such a simple and effective a way to tantalise readers. It gets them wondering what the poem might be about, urging them to read on. Give it a shot!

Dickinson did for poetry what Hemingway later did for prose, She stripped the form down to its barest essentials, creating a style that was both fresh and classic, simple yet nuanced and deep. Even if you have always had little interest in poetry (either as a reader or a writer), I’m convinced her beautiful and accessible work will change your mind!