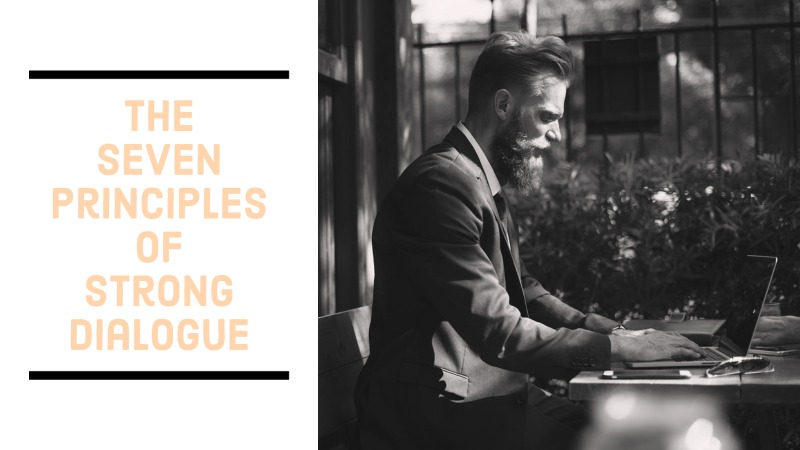 Writers often struggle to write dialogue. In this post, we look at the seven principles of strong dialogue.

In fiction, dialogue is the closest we can get to the action of a story because it’s the only element that has a 1:1 ratio with real time. It’s the method by which we get the closest to truly showing the reader the story rather than telling them about it.

So, it is necessary for us to at least be aware of dialogue’s conventions so we can use them properly, or break them intentionally should we choose to take a more stylised approach.

Let’s take a look at the principles of strong dialogue!

The 7 Principles Of Strong Dialogue

Each dialogue exchange ought to create an action/reaction beat that progresses the scene. Beneath every line of dialogue, the reader must sense a character’s desire, intent to further that desire, and action toward a specific goal. Dialogue should therefore be an extension of a character’s desire through action: the character says something to try to get what they want.

If what they say is purely casual, unmotivated small talk, cut it out. If the character has already made their point, or if the character’s dialogue isn’t an attempt to further their own agenda, that’s probably bad dialogue.

Parse out exposition, bit by bit, sharing only what the reader needs to know when they absolutely need and want to know it. And whatever you do, never have a character say something both they and the person they’re talking with already knows.

Because no one does this in real life; because it is obviously only being said for the benefit of the reader who’s listening in.

And when readers sense characters are saying something purely for their benefit, something that is otherwise unmotivated, they’ll realise they are being spoon fed info because the author doesn’t trust them to read between the lines.

In the end, it will pull readers out of the story.

Many of the same principles of music, including pacing, cadence, tone, and volume, apply to dialogue as well.

But how do you know if the dialogue you have written is music, or noise?

Read your dialogue out loud to hear how it sounds. If it sounds awkward out loud, if you keep fumbling over certain lines, revise those sections until you can read them smoothly.

A common mistake is to write dialogue that sounds like regular human speech. The truth is real conversations are clumsy, halting, tangential, and circuitous— all the things dialogue shouldn’t be. So, get rid of most of the pauses and ‘ums’.

We writers strive for verisimilitude, not the chaos of reality.  Storytelling is an art, after all. It’s okay to take a few creative liberties to craft a stunning piece of dialogue.

Contrary to common belief, in real life people rarely speak just to express themselves, but to achieve something, usually to get something from the person they are talking to.

If you can figure out what your character wants, you will always know what their dialogue should be. But be careful not to have a character ask for exactly what they want or say how they feel. Usually, people only share their deepest feelings and innermost thoughts during private, intimate moments and with someone they feel has earned their trust.

Thus, if the text and subtext are one and the same, the dialogue will feel stilted and unnatural.

Pushing this concept further, characters should rarely respond to a question, statement, or command directly, but rather, obliquely.

A cliché example of this would be a father and daughter saying goodbye after he drops her off at college.

Instead of a tearful ‘I love you, honey,’ he’ll probably say something like, ‘Alright, kiddo—stay safe now.’

She maintains her composure and tells him ‘Hassling me to the bitter end, huh?’

But when they hug? Well, they might hug a little harder, a little longer. Maybe she pulls away, saying something like, ‘Gah, you’re smothering me,’ and socks him on the shoulder.

He knows what she means, she knows what he means, and we know what they both mean. Even so, they communicate the truth of how they feel indirectly.

Never hesitate to use Humour to pump up your dialogue. All it takes is some selective exaggerations:

Let characters speak in their natural idiom based on sociocultural environment and their particular historical moment. When a character uses unnatural jargon or anachronistic language, you risk pulling readers out of the story.

Consider this as well:

Don’t make the mistake many beginning writers do and have your characters constantly soliloquising to one another.

Remember, these aren’t hard and fast rules, but guiding principles.

Whichever route you take, whether you write dialogue that is conventional or stylised, remember that dialogue must first and foremost serve the story you’re telling; it doesn’t have to reach the heights of Aaron Sorkin or David Mamet.

In fact, Mamet, himself insists that as long as your dialogue is born of genuinely motivated character desire, it will probably be fine.

How does he know?

We read and watch translations of once-beautiful dialogue all the time. As long as we can understand and believe the character’s motivation for what they are saying, how they say it isn’t as important.

Now get out there and write!

We hope these seven principles of strong dialogue help you write your story.