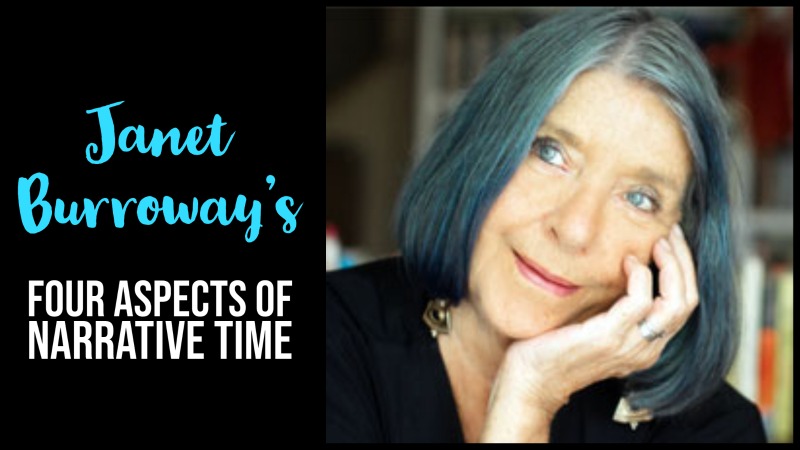 In this post, we look at how time works in a story through Janet Burroway’s four aspects of narrative time.

Who Is Janet Burroway?

While Burroway may not be a household name among avid readers, she is one among many writers and students of writing craft. With her book, Writing Fiction, Burroway did for contemporary fiction craft what Aristotle did for Classic Greek Drama with his Poetics. She codified and described (not prescribed) what works and what doesn’t in prose fiction.

Now, before exploring the different techniques of narrative time outlined by Janet Burroway in Writing Fiction, let’s take a moment to examine how readers interact with literature in real time and how time functions within fiction.

How Time Functions In Fiction

When we view a sculpture, the amount of time we choose to look at it is up to us. We can look at Michelangelo’s David from the moment we enter the gallery until the gallery closes. Whereas, temporally based art, such as film, has a fixed duration.

Literature doesn’t fit neatly within either of these two categories. As with viewing a sculpture, for the most part we can choose when we read a book and for how long. However, though a book may take ten hours to read, those ten hours might be spaced out between days or months, depending on how often we read, and how quickly.

What Is Narrative Time?

But how does time function within a fictional setting itself? A story that takes 20 minutes to read could have a content time of only a few seconds.

So, narrative time is essentially the fluctuating flow of time (its extension and compression) within a story relative to the regular flow of real time for the reader.

With these foundational elements of fictional time in mind, we’ll examine some of the narrative techniques that make it possible to manipulate time within fictional setting.

There are two main ways of rendering fictional time.

Summary’s purpose is to convey info, provide exposition, illuminate character motive, adjust the pace, and transition between scenes. Scene, however, renders a story’s key turning points beat for beat, allowing readers to be in the moment, experiencing it with all five senses. Burroway describes Summary as ‘the mortar which holds a building together’ and Scenes as ‘the bricks that make up the building’.

We want to engage readers emotionally, so it behooves us to write as much of our story in scene as possible. Few things are more compelling than watching a moment of discovery, decision, or action that forever changes the character’s life first hand. Thus, while we can render an entire story in scene, summarising it is unlikely to hold a reader’s attention because key moments would go undramatised.

There are two sub-types of summary: circumstantial and sequential.

Burroway suggests that, to determine when to use each of these techniques in our stories, we ought to observe how our own minds delineate and portray memories. In the end, she says, both kinds of summary exist to contextualise key turning points for maximum impact, which are rendered in scene. So, summary precedes and follows a scene, which dramatises a turning point. The two alternate until the story ends.

Sometimes we need to transition between scenes, but what happens between scenes is irrelevant to the story, so we cut-to a new time, place, or perspective. Film achieves this transition through cuts. In fiction, we do this through white space on the page. We simply start a new scene or sequel.

It sounds counter-intuitive, but when using white space, we ought to avoid transitional language, such as ‘It wasn’t long before…’ Though such transitions are meant to orient readers, they are extraneous, and often comes across as the writer doubting the reader’s intelligence. So, while ‘Three hours later…’ might work for SpongeBob, it’s an insulting way to transition in fiction.

Burroway mentions a second way to transition instead of white space, which she calls ‘montage’. Montage is a kind of hybrid between summary and cut-to. Although it doesn’t summarise specific circumstances or a sequence of events, it does create a panoramic sweep of movement through space and time using quick impressionistic details.

Which technique you choose, white-space or montage, all depend on the effect you wish to create.

While summary and white space allow us to skip ahead in a story, flashbacks allow us to go back in time to contextualise the present scene. However, writers often flashback every chance they get rather than finding ways to subtly convey the same info through characterisation and dialogue.

Just as we mentioned preferring subtlety in symbolic place and white space transitions, a light touch is all that’s needed when writing flashbacks.

Or, as Burroway suggests, there’s nothing wrong with simply transitioning back to the present with the word ‘Now…’

Along with the ways of manipulating fictional time we’ve mentioned already, there’s one final technique. Slow-motion.

Slow-mo can be used to highlight significant details or convey a sense of intense focus in a way that mirrors a real phenomenon.

We’ve all had that feeling of time slowing during a moment of emotional intensity. We notice every little tic on someone’s face while breaking bad news. The whole world seems to slow down moments before a wreck. A peculiar detail can dilate time so that a glance feels like we’ve been staring and analysing for hours.

To create this sense of slow-mo in fiction, we simply take our time describing scene details and the character’s consequent thoughts. We can further heighten that sense of hyper-focus by including random details the POV character can’t help noticing in the background of the emotionally intense event.

That said, please, please, please don’t use this technique in the middle of an extremely tense and active scene. And, unless your character is a superhero with the power to pause time, definitely don’t go from a scene, to slow-mo, to a flashback.

Rendering every moment in scene and using slow-mo to zoom in on every detail indiscriminately doesn’t lead to immersiveness, but glut. Likewise, when we render turning points in summary, or skip over them altogether using white space, only hinting at key moments from the past, it leads not to concision, but dearth.

But if you avail yourselves of Burroway’s four aspects of narrative time and apply them effectively, I guarantee you’ll find your stories’ pacing will never feel slow, stilted, or halting, but brisk, smooth and steady.

TIP: If you want to learn more about setting and how to use it for your story, buy: The Setting Up The Setting Workbook

Explore: Writing Advice From The World’s Most Famous Authors