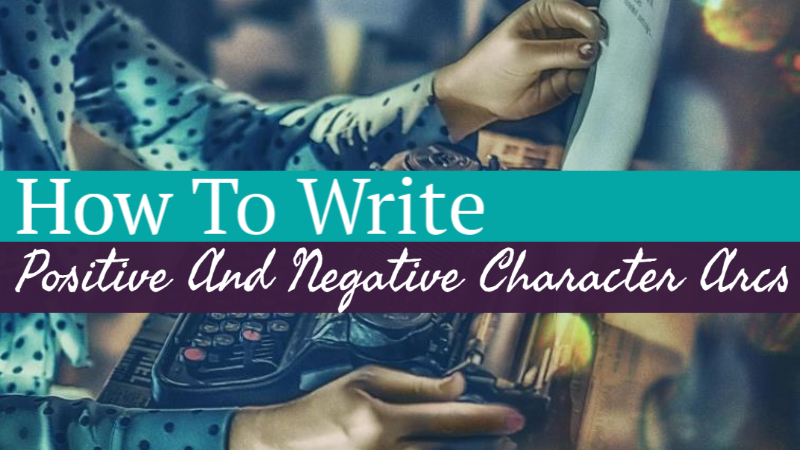 Writers Write is a resource for writers. In this post, we explain how to write positive and negative character arcs.

You’ve probably heard the phrase ‘character arc’ tossed around, but few seem to know how to define the concept, let alone use it. And even when writers define a character arc and how to effectively employ it, their answers are head-spinningly complicated.

Today I’d like to take a crack at addressing this problem. I propose to do so using examples from the ubiquitous hit TV show– Avatar: The Last Airbender. And this show is back in the zeitgeist since it was released on Netflix, so I’m confident most folks will track with me. To those who haven’t watched this masterpiece of animation: SPOILERS AHEAD.

What Is A Character Arc?

While a plot follows the character’s external journey– their proactive attempts to achieve a tangible goal– their arc tracks how they change on the inside by pursuing their goal.

So, what’s the difference between a positive and a negative arc?

How To Write Positive And Negative Character Arcs

Now the moment we’ve all been waiting for—some examples from Avatar!

Zuko has one of the most dramatic and potent character arcs ever because he starts so deep in the negatives. The show begins with him hunting the Avatar so he can restore his honour in his father’s eyes and return home from exile. He is so single-minded in pursuit of his goal, he becomes completely wrapped up in himself—he lacks empathy. He is cruel to his crew, and he’s willing to hurt or kill anyone who stands in his way. Eventually, he even betrays the one person who has always been by his side: his Uncle Iroh. It is this last selfish decision that helps him climb up out of his negative arc toward a positive one. When he confronts the reality that he broke the heart of the one person who truly loves him, Zuko begins to try a new way of living. He tries selflessness instead. Zuko’s new path isn’t easier or less painful—it’s arguably much harder and causes him genuine when he faces his inexcusable past actions head-on. But this selfless path is much more rewarding, because his conscience is unburdened and each day he becomes his true self, more and more.

Azula is Zuko’s sister, her father’s favourite, and the heir to the throne. She already has everything she could want. But rather than be satisfied, she craves more. She thwarts her brother and shames her Uncle Iroh—she’ll be the one to bring her father the Avatar, and she’ll conquer the city her Uncle lost in battle. It’s not just that Azula wants more than she needs– because she has it all– the only thing left for her to do is tear others down to further cement her superiority. Well, she accomplishes all this. And, in doing so, she alienates and isolates herself until she has everything, has hurt everyone, and is utterly alone. But, while her ruthlessness and selfishness have gotten her whatever she wants, she is left–not just unfulfilled– but hollow. She goes mad. Her arc ends with her devolving into a mere creature crying and screaming incoherently.

The reason these two arcs are so successful is that we can track how the character’s motivation and desire informs their actions. We can also track how the consequences of their actions change them along the way, pushing them further down the path they were on, or onto an alternative path.

Now let’s consider some arcs that were less successful (or at least less convincing) in their execution.

Mai and Ty Lee are supposed to be Azula’s best friends: Mai is a dark brooding loner, who only cares about winning Zuko’s love, while Ty Lee is a bright, cheerful acrobat working in a circus. The problem with these characters’ arcs (first negative, then positive) is their motivations are unclear. They agree to join Azula in her hunt for the Avatar ostensibly because they’re her friends, but we see no sign of camaraderie or affection exchanged between her and them. Even if we accept they are joining Azula because they are her friends, it’s still hard to imagine an unmotivated loner and a sweetheart would follow her in committing such horrific acts (e.g. war crimes). By the show’s end, Mai and Ty Lee abandon Azula as quickly they joined her, and with just as little motivation.

Why They Don’t Work

So, a character’s arc will often fail if the audience can’t determine a convincing reason why the characters are acting selfishly or benevolently. A quick change in their arc’s direction is also fatal. For some context, it takes Zuko until the 51st episode of a 60-episode show (over 90% of the story) to complete his arc. Mai and Ty Lee negative arcs (from neutral to evil) take one episode, while their positive arcs (evil to good) only take a couple of episodes.

An arc succeeds when: