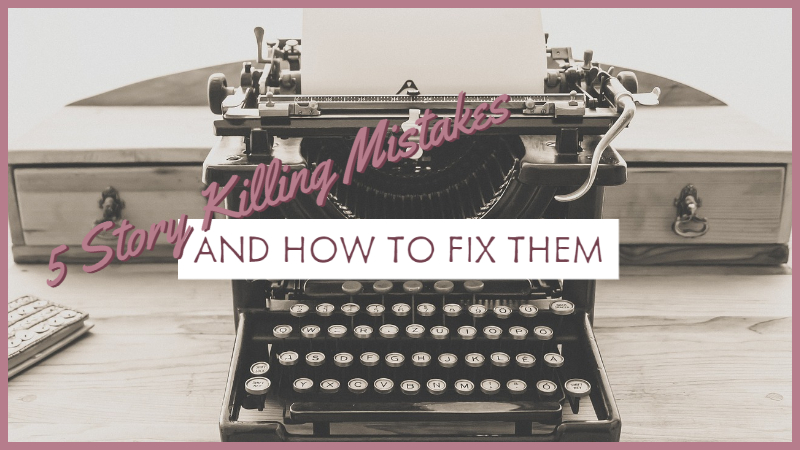 Writers Write is a resource for writers. In this post, we explore five story killing mistakes and how you can fix them.

You’ve read all the great authors, perused a few craft books– even taken writing workshops. You’ve finished a few stories or even a novel. Now it’s time to send out your stories for publication. All you have to do is wait for the book contracts and award nominations to roll in, right?

But… for some reason, no one seems interested in your work.

In a decade of studying writing, I’ve worked as an editorial assistant for a literary journal, as an editor, a manuscript analyst, and I’ve published work of my own. Through all this, I’ve picked up on the most common, story-killing mistakes that will make editors and agents toss out your stories.

If you heed these tips, you’re chances of publication will sky-rocket!

5 Story Killing Mistakes And How To Fix Them

Many writers think plot is a dirty word; to them it means formulaic, cliché storytelling. They want to write ‘character-driven stories’ instead. But this is a false dichotomy. We can only find out who a character is through what they do, and a plot is just an account of what the character does. So, plot and character are inextricably intertwined.

To avoid this, all we do is determine what the character wants, how she plans to get it, and what obstacles block her way. The plot begins when she realises she wants something. Then it follows her as she faces increasingly difficult obstacles and ends when she succeeds or fails to achieve her goal. If the ways in which she tries to achieve her goal reveal a consistent believable character, plot and character will be in harmony.

Point of View (POV) can seem like a big, scary subject, but it doesn’t have to be. Many writers struggle to keep a consistent POV, confusing readers about what’s happening, as well as when and where.

I have a solution.

POV is just the perspective your story is told from. The simplest way to think of this is imagine your story as a movie and the POV as the camera filming it. Focus on writing about what the camera is pointing at moment to moment.

In a movie, a lot of quick cuts, long close ups, and random voiceover can be disorienting, boring, and confusing. The same is true in fiction. So, make sure your “camera” shows readers only what’s necessary for readers to see the story’s events unfold clearly. Pick a single perspective—whether it’s a character’s, that of a fly on the wall, or a god-like storyteller—and stick to it throughout the telling.

The single most common problem writers have is conveying character motivation. And it’s a big problem, indeed.

For example: your character wants to win her school’s talent show, and she plans to do this by learning to shred on the guitar, so she can melt everyone’s faces. Not a bad start, but for this story to affect readers emotionally, we need to understand why she wants to do this. Well, she’s been bullied or ignored because of the way she dresses, and she’s painfully awkward and shy. Her why is: she wants to be seen and admired for something she’s good at so people might finally try to get to know her.

Now we’ve got a story with heart, not just compelling characters and actions.

Your story has a lot of crazy, dramatic, conflict-filled situations, but readers keep saying that nothing happens!

What’s that all about?

Well, what they mean is nothing important happens, or what does happen isn’t driven by the character, but random happenstance.

There are three kinds of story events–a non-scene, a vignette, and a scene—only one of which is always desirable.

In a non-scene, the character may want something, but she doesn’t do anything about it. Most likely, she simply thinks about what she wants or tells someone else about it. Not too interesting, is it? Because nothing happens or changes. Worst case, it’s navel gazing. Best case, it’s your character’s gripe session.

In a vignette, some external event, outside the protagonist’s control happens. This experience has a profound impact on them, leading them to an insight (positive or negative) about themselves or life. Better, but there’s no momentum, no forward motion. There’s activity, but no action.

In a true scene, the character actively pursues a goal, faces obstacles, which she either succeeds or fails to overcome. This leads her to a new goal or insight about the way forward. By the scene’s end, she is closer or further from her goal.

Writers constantly fret over finding their own unique writing style.

Why? In your desperation to be different, you’re likely to affect a stilted, unnatural style.

Instead, read stories you love by writers you admire and write in the way that comes most naturally for you. Do this while bearing in mind ways you can communicate with clarity and concision and your authentic voice will arise by itself. It’ll be a one-of-a-kind blend of all your favourite writers filtered through your own idiom.

A great way to determine if you’re doing this is to read your work aloud. When you find yourself stumbling over a word or phrase, rewrite it so that it reads smoothly and clearly.

If you affect a style simply because it’s impressive or in vogue, your writing will sound stiff or sloppy, but always pretentious. Ultimately, you want your writing to be invisible. With great writing, the reader no longer sees symbols on a page. Instead she tastes, smells, hears, and feels all that your sentences describe.

And that’s that! Try rereading and revising your work with these tips in mind and I guarantee it will improve by leaps and bounds!

[TOP TIP: Take our course Writers Write: How To Write A Book]