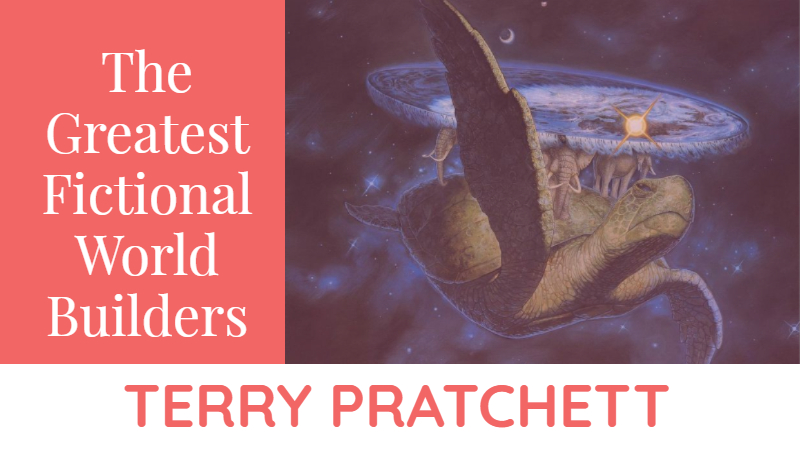 Welcome to the first post in my greatest fictional world builders series. This series is a reference and a resource for writers who are building their own worlds.

I am going to start with one of the greatest fictional world builders of all time: Terry Pratchett.

[Terry Pratchett was an English author of fantasy novels who was awarded the World Fantasy Life Achievement Award in 2010. Born 28 April 1948 and died 12 March 2015, he was best known for the Discworld series, which began with The Colour of Magic Over the course of 35 years, Terry Pratchett created the most complete fictional world ever printed on paper – Discworld.

It contains 41 main novels and more than 20 supporting books. It details events from the creation of the universe to the first steam engine to how to programme computers.

Discworld deals with social, racial, and class issues and how they would logically affect a fantasy world.

Pratchett wrote a number of other books and book series, but nothing came close to the complexity of what he achieved with Discworld.

At around 6.5 million words, Pratchett said a great deal about his creation, but, as a fan, I feel that so much more was still to come had Pratchett not died of Alzheimer’s Disease.

What exactly is Discworld?

Discworld is a fantasy setting with a comic tone and a serious message. It shows you how to do fantasy correctly.

But, unlike so many other worlds, Discworld continues on in every direction. You can travel to the far side of the disc to the Counterweight Continent or to sunny Foureks – The Last Continent.

The world extends to all corners, well, all rims, of the map. It is populated with interesting peoples, most of whom are well thought-out.

This world contains Dwarves and Trolls and any number of traditional fantasy races. These creatures do not conform to stereotypes, unless it makes sense for them to do so.

It’s a funny world, but it takes itself very seriously. This confuses some people who can’t accept that serious things can also be funny. If you don’t have this malfunction, there is no better starting place for world building than the Discworld series.

Because he is one of the greatest fictional world builders, Discworld is built logically. One giant turtle at a time.

The problem with a number of authors’ approach to fantasy is that they do not take it seriously. Not taking your world seriously will eventually make it fall apart.

If your world is flat and magical, then there must be people who would want to study it seriously. There must also be mad people with crazy ideas about round worlds and silly ideas like science.

For example, in Harry Potter, have you ever wondered why England needs such a massive magical government – at least several hundred people? There are only 20 children per grade in Hogwarts. Which is the only magic school. So there must only really be about 1000 wizards or so in the whole country.

You won’t find that kind of sloppy logic on the Discworld. Pratchett has worked out his world. His wizards and witches behave in ways that you would expect if they were real.

Not only that, but Pratchett takes into consideration how his world deals with sanitation. Why would people not employ, smelly, trash loving gnolls to take the rubbish away?

In short, he built up the world and pieced it together until it made sense. So much so, that you could not imagine it being otherwise. This is one of the best tips to teach you to write fantasy.

‘What I have is a relentlessly controlled imagination. What looks like wild invention is actually quite carefully calculated.’ ~Terry Pratchett

In his collected writings and short stories A Slip of the Keyboard and A Blink of the Screen, Terry Pratchett often talks about how and why he wrote.

To begin with, he started out as a journalist and had to write massive amounts of copy every day. This built writing into a habit (hooked on writing) for the young Pratchett.

But, even before that, he was an avid reader. He volunteered at his school library just to be closer to books and was often found at science fiction conventions to get closer to some of his heroes like Arthur C. Clark.

Naturally, he tried his hand at science fiction. Some of it is very good.

But, I believe what he really wanted to do was use writing to express his views about the world with a narrative. For example in Going Postal, he wanted to make a case against corporate greed. It just happened to involve magical clay monsters.

We see this strongly in his third Discworld book Equal Rites. Apparently angry at what society was telling him about how he should be raising his daughter, he wrote in a rage. He produced a comical but satirical take on gender politics about a girl wanting to be a wizard and not a witch.

Before Equal Rites, his books lacked purpose. After this, you always felt you were being taught something important in an enjoyable way. You often have this feeling with great works of fiction.

Terry Pratchett started writing novels with the invention of the Word Processor. He loved technology and was an early adopter of computers. He believed it allowed him to capture a whole book in one place, and made it easier for him to edit and change the book as he needed.

Since he always described writing as a slow task, often only getting a few hundred words done a day, this probably saved him a huge amount of time.

Compared to other authors of the day who wrote by hand or on type-writers, he seemed a bit crazy. Always carrying his giant “laptop” around with him. Apparently, it had to be assembled each time he wanted to use it. And use it he did. He took it everywhere, getting as much writing time in a day as he could. He often talked about writing in green rooms on TV shows, in hotel rooms, and on trains.

He did all of this while looking like a giant nerd and not giving one damn.

Pratchett wrote because he felt he had to.

It was not easy for him. It did not flow naturally for him. He struggled with his education, and did not even finish school. Despite this, he had a tremendous appetite for books.

He read widely and voraciously. His characters often talk about wishing they had been better educated. They often had a chip on their shoulders about not fitting in.

Pratchett, it seems, was trying to educate himself in everything. He constantly read and learnt.

How books are made?

He said that if one reads enough, one fills up, and eventually some of it overflows and that is how books are made.

Isn’t that a delightful excuse to read all day long? You’ll have to write a book once you are full.

It did seem he regretted his lack of education. In some ways his lifetime of learning and writing and teaching seemed a way to make up from this perceived inadequacy.

You could get away with reading just three Discworld books. I don’t know why anyone would do that. Once you get hooked, you will have to read all of them.

But, the three you need to read for the purpose of world building are:

Non-Discworld books to read are:

And of course the books that he wrote with other damn fine story-tellers are:

As this is being published after Christmas, you should read Hogfather or at least watch the BBC movies.

Pratchett built his world to be a platform so that he could say anything he wanted. This is why he is one of the greatest fictional world builders.

It was large and varied enough that he could tell a city story about police, or a country tale about a murder. It had space for stories about banking and stories about farming.

The real magic of Discworld though, was that regardless of what you were reading about, you always felt like you might want to go there. Or even that it might be a nice place to live. There are several travel guides written about the various places on the Disc.

Not many fictional worlds have a thriving travel industry.

The Best Writing Tip: All this goes into making it seem more than real. If you can convince your reader that they might want to go there on holiday, you know you have made a truly real world.

by Christopher Luke Dean (Can be found at the sign of the Mended Drum.)