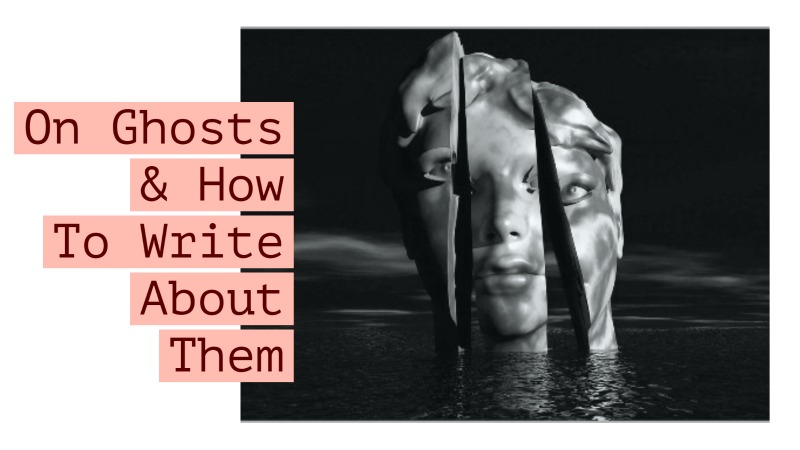 On Ghosts & How To Write About Them

Do you like a good ghost story? In this post, we explore the phenomenon of ghosts and how to write about them.

If you’re anything like me, you love a spooky ghost story. And if you ever tried telling one, either out loud around a fire, or via the written word in a short story, you’ve realised they’re tough to write well!

But why is that? Aren’t all ghost stories the same? A character goes to spooky, secluded place and weird things start happening. Grisly ghosts pop out and a terrible fate befalls the character—no one sleeps that night.

It seems simple enough, but ghosts are actually freighted with symbolic emotional and psychological significance. So, any old poltergeist won’t do.

Your ghost has to be carefully crafted for the protagonist so they really press on the protagonist’s shame, fear, and trauma. Plus, because the archetypal ghost story plots and tropes are so familiar, you have to work that much harder to craft one that can truly surprise your audience.

No surprise? No spookiness.

As some of you already know, I’m a horror nerd—but I’m a ghost story junkie, in particular. I read ghost stories constantly, and I recently read two huge collections of Southeast Asian ghost stories that really helped me solidify my thoughts on ghosts.

In this article, we’ll dig up every corner of ghostlore I’ve explored so we can learn about ghosts and how to write about them. Who knows what we’ll discover!

On Ghosts & How To Write About Them

The History of Ghosts & Ghost Stories

Ghost Stories are part of an ancient, ubiquitous form of traditional literature alongside fables, fairy tales, folktales, and myth. In fact, one of the earliest mentions of ghosts comes from the Torah, when King Saul has a Witch conjure the ghost of his old mentor, Samuel.

Like most traditional literature, Ghost Stories were first passed down orally. Then, over time, people began writing them down. Because it’s hard to sustain a state of dread in the audience over a long time, even in their written form, Ghost Stories have remained quite short. Their brevity allows them to be told in a single sitting, which explains their popularity as one of the few remaining oral traditions. Swapping spooky stories is a perennial favourite pastime around campfires, at dinner parties, and at sleep-overs.

Ghost Stories entered their Golden Age in the 19th and 20th centuries with the rise of writers such as M. R. James and Henry James (no relation) in the Western tradition, and Japanese ghostlorist Koizumi Yakumo (Lafcadio Hearn) in the Eastern tradition.

But where did the concept of ghosts originate?

No one really knows, but Lafcadio Hearn theorised Ghosts start out as the boogeymen and lost loved ones haunting our dreams as children. Then gradually, over time, they begin to make an appearance in reality when we are alone and our perception is limited. When our surroundings are obscured by darkness, closed doors, right angles, or fog— our imaginations really kick into high gear!

Our brains, when on alert, turn anything, even the crunch of leaves, into the source of potential dangers, and thus populate the dark woods with the ghosts that once haunted our dreams.

When thinking about ghosts and how to write about them, I’ve noted a few types of ghosts:

This is the spirit of someone who has died, which was unable to pass on. It remains bound to the earthly realm.

This is a manifestation of the protagonist’s troubled mind, haunting them via:

From the outside looking in, the protagonist looks paranoid, but, to them, their experience of the haunting feels all too real.

In this example, the author has left the ghost’s origins ambiguous. That is, as the story unfolds, it seems like there is equal evidence to support the ghost belonging to either of the previous two categories. Maybe there’s a literal spirit haunting the protagonist, or maybe the apparent ghost is a manifestation of their shame and fear via a break from reality

In this article, we’ll focus on the classic, supernatural ghost, but much of what we’ll cover applies just as well to ghosts of the second and third type.

What Do Ghosts Look Like & What Signs Augur Their Approach?

We all know the old standby for a ghost’s appearance: a pale, white, semi-translucent form with some indicator of how they were killed—maybe a scar or cut on their neck if they’d died of a slit throat.

This is fine, but not terribly creative.

In Japanese lore, ghosts have all sorts of wild an uncanny appearances. They could be gigantic, or tiny, have long spindly arms, or have no arms at all, one eye or a thousand eyes. Find some physical feature which could symbolise either the ghost’s death, their unfinished business, or both at once. For example, if the ghost were strangled to death, perhaps now, their head is long and lolls to the side as if broken; now their hands are huge and powerful, so they can strangle their victims to death.

It’s wise to include a cue that augurs the ghost’s approach, something that you could easily use as a red herring to frighten the protagonist and, by extension, the audience.

Rather than the simple ‘ghost only appears at night in this room’ trope, your ghost could appear anywhere under certain conditions. For example, your ghost could travel via electrical lines. Whenever they’re near you can hear an electrical hum. Lights flicker, and the smell of burning copper and rubber permeates the area. Use anything that could build dread in the protagonist and audience because they fear the ghost is near. And maybe it is, or maybe there’s just faulty wiring nearby. Who knows?

Where Do Ghost Come From & What Is Their Purpose?

Where Are Ghosts Found?

Supernatural Ghosts often haunt (or are ‘attached to’) a few specific types of things:

What Can Ghosts Do?

A better question might be what can’t ghosts do? And while that sounds cheeky given ghosts have so many incredible abilities across various traditions, I’d seriously suggest you lay out clearly what your ghost can and can’t do early in the telling.

Well, otherwise, if they display an ability late in the story they’d never exhibited before, it might come across as a plot convenience—like you couldn’t figure out an appropriate and inevitable way to resolve a plot point, so you just magicked your way out of it. Regardless, if you have a payoff with no setup, you’ve created a Deus Ex Machina and that’s just lazy writing. It’s the literary equivalent of not telling someone all the rules of a game and then revealing and explaining said rules the moment you take advantage of them.

So, if your ghost can phase through solid matter, enter people’s dreams, possess and control people, manipulate physical objects, or take a physical form themselves—let the audience in on these factors as early as possible.

How Can A Ghost Be Put To Rest?

As you may have guessed, before a ghost can be put to rest, they must resolve their unfinished business. This could mean any number of things; they might need:

However, as I mentioned earlier, some ghosts just want to make others suffer as they have. Period. For example, in many Japanese ghost stories the ghost of a spurned or abandoned woman will devote her ghostly existence to seducing, tormenting, and killing as many men as she can. Often these ghosts can’t be put to rest by conventional means, and thus must be exorcised by a holy person and/or their body must be given proper burial.

What Do Ghosts Represent?

In general, I think the Horror genre unmasks our societal fears at the time of writing, and thus our personal prejudices and shames. Sometimes this is done intentionally, as in the series the Twilight Zone, which was full of socio-cultural allegory.

Other times, this is done poorly and unintentionally as with many of the works produced during the 1970’s-80’s horror boom, when anyone deemed socially other (or their very obvious allegorical proxy) was portrayed as being monstrous, transgressive, and/or frightening by the moral majority of the time.

Okay, so what about ghosts?

Well, ghosts are literal manifestations of the past coming back to haunt us, so I think it’s safe to say ghosts are symbolic explorations of what it feels like to confront and overcome:

So, the more you can work one or more of those themes into your story (via the backstory of the ghost, protagonist, or both), the more emotionally and psychologically resonant it will be.

Final Thoughts: Why Are Ghosts So Pervasive?

Ghosts occupy a weird place in our minds: they are spooky, but we often tell their stories in cosy situations and in community. Ghosts are also implicitly hopeful because they suggest the possibility of life after death, that justice can prevail after all, and that we can find rest and peace in the afterlife. This doubly-charged emotional value we find in ghosts of being comforting and creepy is rare in art and, to me, infinitely fascinating.

Now take what you’ve learned on ghosts and how to write about them and go write a ghost story!

I hope this post helps you with ghosts and how to write about them in your stories.