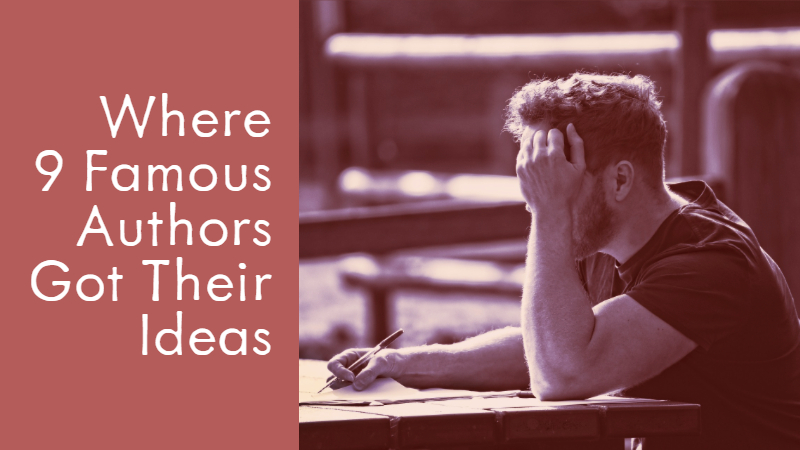 Where 9 Famous Authors Got Their Ideas

Have you ever wondered how famous authors thought up their best-selling books? In this post, our author writes definitively about where 9 famous authors got their ideas.

According to Stephen King, ‘50%! No more. No less!’ is the percentage of ideas that he can point at and say, ‘I know where that one came from.’

This seems about right, right?

I am sure I can pinpoint about half of my ideas. Most of them happen in the shower. So, if anything, it shows us that the idea gods like me to be clean. Or, perhaps that they should get out the bathroom when I’m trying to wash my hair!

Regardless, where do famous authors say they got the ideas for their best-selling books?

Where 9 Famous Authors Got Their Ideas

Stephen King believes in the muses. Those lovely ladies who hang around poets, artists, and writers giving them all their best ideas.

Except King’s muse is a middle-aged man – a slob who lives in his basement. His muse sleeps late and doesn’t like to be disturbed. But, he’s well worth having around.

You see every now and then Mr Muse will surface from his stupor, stub out his cigar, hand-rolled, and burst into King’s office. Throw down a great idea then bugger off without so much as a ‘farewell’.

But, King says he’s worth his substantial weight in gold. And, you just have to learn to listen to him and pray he never goes away.

On stage, a middle-aged Australian man, probably not his or King’s muse, asked:

‘Where do you get your ideas from?’
‘Ah’, said Gaiman, ‘You have done the thing that all authors hate. And, we hate it for two reasons. One because we get asked this every day, and two, we are scared the ideas will stop if we tell someone else.’

Okay, that’s not a direct quote you can watch it here if you want.

What he does say, apart from getting them from an ‘Idea-of-the-month club’, is useful. He tells us that authors, like everybody, have good ideas. What makes authors different is that they often remember these ideas long enough to recognise that they are good ideas. Then, hopefully, they write them down.

In another interview speaking with his friend and co-author, Terry Pratchett they talk about how ideas float from head to head. Pratchett says some people are like sieves. An idea can pass through these people without them ever noticing. But, some people’s brains bang into every idea they come across.

But, if you don’t use them, they will find another place to live.

Pratchett and Gaiman say that sometimes they will have an idea for a book then forget about it and suddenly a few years later, The Book Thief or something comes out. And they think, ‘Oh, I remember writing that. Only I didn’t, did I?’

Of course, it was actually Markus Zusak who wrote The Book Thief

Ideas can, of course, be stored. They, like spells, must be bound to a page.

Roald Dahl kept an ideas book from an early age. He would just jot down an idea as it struck him.

This is a normal thing to do, but I think most people just forget about them. Dahl had written in one of his school exercise books about a Big Friendly Giant and then, at the age of 66, he actually wrote the book.

There is no indication of where he got the idea from, probably in the shower, but it almost seems that ideas are alive. They seek out a mind they like. If they like that mind enough they put down roots and germinate in your notebooks for decades until the idea is ready to be harvested.

I wonder if he had another note in his book that said, “Sky Rhino destroys house, boy, John James, escapes in peach Giant Peach.”

Other authors get their ideas from more normal places.

Suzanne Collins and Khaled Hosseini both got their ideas from vegetating in front of a TV. Although, I still think Collins pinched the idea from Battle Royale, which is about children fighting to the death in a contest organised by the government.

Either way, she got it from a TV show.

Hosseini was watching a documentary about the Taliban that banned kite flying. So, he wrote a short story that would later become The Kite Runner

Collins claims she was switching between a kids’ show and the news late at night. These two blurred in her mind and she thought of the idea for The Hunger Games. Whether that show was Battle Royale or not she has never said.

Neither mentioned a shower or middle-aged smoker living in their basement.

Getting Stuck In Places

Douglas Adams was unable to meet deadlines. So, according to his editor, it was often necessary to lock him in a room and force him to write.

This produced some of the strangest and fastest paced books of all time. Luckily, YouTube did not exist when Adams was writing or we would have lost him to it. How many good books would never have been written because of social media distractions?

If you enjoy Harry Potter you should thank the poor state of British public transportation.

On her way home, stuck for four hours on a ‘delayed’ train, the image of a boy wizard started to solidify in J. K. Rowling’s mind. She had a notebook but no working pen. So, she just thought about it until it fixed in her mind.

Having a multi-billion dollar idea without a way to record it is why I have a fistful of fine-liners in my coat pockets at all times.

J. R. R. Tolkien was also metaphorically stuck. He was marking exam papers. I know, from experience, the terrible boredom of this task.

On a whim, he wrote on the back of a paper, ‘In a hole in the ground there lived a Hobbit.’ Thereafter, he dedicated the rest of his life to making that sentence make sense. Some ideas demand a lot of a person. They are usually worth it.

He gave the paper a good mark.

P. G. Wodehouse created Jeeves as a throw-away character. He had only two lines in the book he first appeared in.

Later, when he was stuck trying to figure out how to get two of his not-very-clever characters out of trouble, he said, ‘Well, how can I get them out? And I thought: Suppose one of them had an omniscient valet? I wrote a short story about him, then another short story, then several more short stories and novels. That’s how a character grows. I think I’ve written nine Jeeves novels now and about thirty short stories.’

‘Good Lord, Jeeves! Is there anything you don’t know?’
‘I couldn’t say, sir.’ ― P.G. Wodehouse, The Inimitable Jeeves

Both Wodehouse and Tolkien were middle-aged men who smoked.

I’ve looked at where these nine famous authors got their ideas and the science is in on this important topic. All I have to do is release the definitive result.

Ideas come from a muse who smokes cigars and lives in a basement; who is stuck on a train; watching the News (probably in the shower); while marking exams; trying to figure out how your characters can get out of a situation; in a notebook you wrote your ideas in as a child; and being locked in a room with a deadline.

Simple, I bet it would work for anyone. Why not give it a try?

by Christopher Luke Dean (Who doesn’t smoke but knows people who do.)