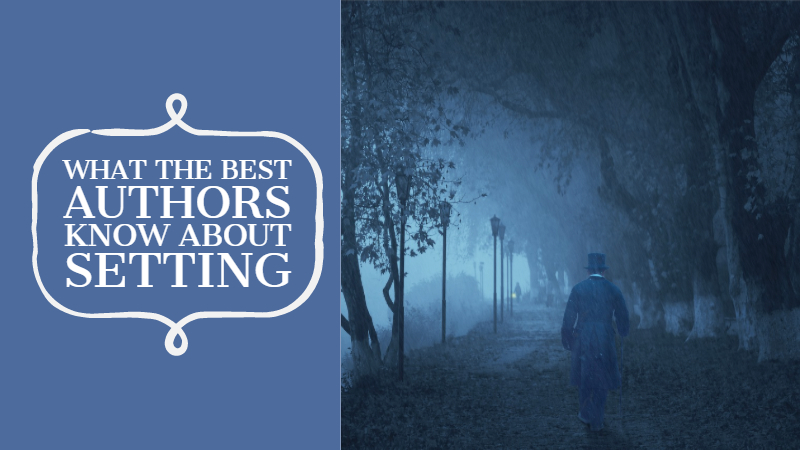 Find out what J.K. Rowling and other bestselling authors know about setting.

Setting is a non-negotiable part of the writing process. It is not just for genre fiction.

There is no writing that is not concerned with setting. Yet, it is often the most neglected part of the inexperienced author’s work.

The best authors create settings that reflect their characters perfectly. They create characters that could not really exist anywhere else.

Here are some examples from Bestselling Authors for you to follow.

Even the real world needs setting. Historians and travel writers like Bill Bryson, Bestselling Author, spend about a quarter of their words setting up the world.

Just because Bryson writes about places that exist does not excuse him from recreating them in compelling tones on the page. In doing so, he makes reading about the creation of the light bulb interesting.

When Winston Churchill, Bestselling Author, wrote A History of the English-Speaking Peoples he made the reader feel the world.

It was deeply personal and vivid. It gave the feeling that history was a narrative work created by an author and not just a boring set of events. It was a story set not on an Earth, but as Churchill saw the Earth.

Sherlock Holmes does not live in the real world. Arthur Conan Doyle, Bestselling Author, created an image of Victorian London where a mad drug-addicted genius could, with his platonic life partner, go about saving the day using convoluted reasoning.

Holmes and Watson are a buddy cop duo. Or, a Superhero and his sidekick. They can only exist in a surreal London. Just like Batman could only exist in a Surreal America. Setting allows them to flourish.

Let’s use Ian Fleming, Bestselling Author, as an example. He created James Bond.

Fleming had worked in the spy world, I believe with Roald Dahl. But, he would later say it was mostly very boring paperwork and even if you had to seduce the ambassador’s wife it was more a chore than a perk.

But, people have a romantic idea in their heads about spies. So, he built a world around the perfect spy.

James Bond was crafted to the specifications of the world he lived in. He is a perfectly round peg in a masterfully-crafted round-peg hole.

James Bond would die in the “real” world. He would have long ago been poisoned by a boring Russian agent serving him a “Vell-Shaken Martini, Comrade Bond”. For God’s sake, he only stays in the best hotels and wears the fanciest clothes.

The setting is written to forgive all these appalling flaws. In fact, the world supplies Bond with villains who help him. They explain their plans to him and leave the room to give him a chance to escape. Rather than just shoot him in silence, they watch him step out of Zanzibar’s only vintage Austin Martin at the door of the Ritz.

The difference between a well-balanced scene and two floating heads in a void, is the setting.

Saving the world is only meaningful if the world is worth saving. It’s quite possible to present the world as it is. Full of war and rising seas. And for people not to care.

Making something realistic does not mean I want it to keep existing. Most of reality is a horrific mess. Filled with murderers and black-holes that will eat the universe.

On the other hand, the world in The Lord of the Rings by J. R. R. Tolkien (Bestselling Author), is full of magical elves and happy hobbits who like warm summer days and good food and drink.

Terry Pratchett’s Discworld is full of places which, as he says, “are not exactly the real world but very close to it”, but better. Ankh-Morpork is London and New York rolled into one city. But, it has Wizards instead of college professors. It has vampires who work in the Kosher Butchers.

It has everything a fantasy city would logically have if it were a real place.

And, because Terry Pratchett spent time telling us how the cobbled streets felt through Sam Vimes’ cheap cardboard-soled shoes; and how the river Ankh does not so much flow as sludge; and how the introduction of Fire-Insurance resulted in the greatest fire in the city’s history; it becomes a real place.

It is frankly more real than reality, because it is a place we can wrap our minds around.

Making your setting as character-full as your characters are, is what brings a story together. It makes it a real chore to come back to the real world for your reader.

Many children grew up in the setting of Harry Potter’s Wizarding World. And, in their hearts, they never really left. J. K. Rowling, Bestselling Author, knew she had a setting better than any of her characters.

The world around Harry is what children wanted – not Harry. They wanted to live in it. Just like some of us grew up hoping we’d get a ride on the Millennium Falcon or walk through the closet to Narnia.

If you have a story without a setting, you only have half a story.

But, if you have a fabulous setting without a story, it will fill itself with both plot and characters.

So, why not give your characters somewhere to live and see who shows up? They might surprise you.

by Christopher Luke Dean (Who’s sad he has no more Discworld books left to read.)