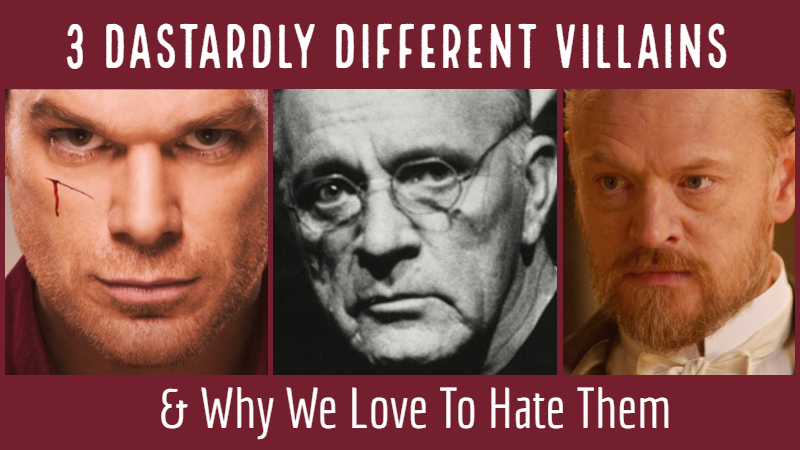 3 Dastardly Different Villains & Why We Love To Hate Them

This post is about three dastardly different villains, why they became so popular, and what we, as writers, can learn from them.

In previous posts, I wrote about 3 Truly Odd Protagonists & Why We Really Really Like Them and 3 Super Sidekicks & What They Do For Your Story. In this post, I write about three dastardly villains and why we love to hate them.

Boring baddies are the industry standard in a world that seems to have forgotten about giving the villain something to do. But, we can love our antagonists as much as we love the protagonists who battle them.

So, here is a post about three villains and how they steal the show on the page and screen. I look at what makes them different and, if not likeable, at least fascinating. Hopefully, we can use this to learn how to write a compelling, page-turning nemesis for our hero. ‘He is the Napoleon of crime, Watson. He is the organiser of half that is evil and of nearly all that is undetected in this great city…’ — Holmes, “The Final Problem”

Arthur Conan Doyle created Professor James Moriarty as the mirror of Sherlock Holmes. But, not in a boring Marvel movie way. He actually has independence and agency away from the protagonist.

Moriarty is actually a minor villain in the Novel series only really showing up in The Final Problem. What makes him interesting is that his role in the plot is to kill Holmes and he achieves this.

This is why he holds a special place in our hearts as the only man who could best the world’s greatest mind. Of course, Holmes’s popularity was such that he came back from the dead sometime later, but Doyle really thought this was going to be the end of Holmes when he wrote the story.

Moriarty has grown in popularity with every generation and new iteration of Holmes. But, his archetypal style as the great mastermind gave him flavour in the novels, movies, and shows.

This meant he wasn’t just another throwaway villain. He was linked to every crime. Holmes only noticed him because various unrelated crimes seemed to be somehow co-ordinated.

He is also unique in that he is a villain who is reported on by Holmes to Watson, but Watson never meets Moriarty. He is like a shadow in the mind of Holmes. We can’t be certain he is even real.

Yes, yes, I know Watson knows he is real.

We are fascinated with him because he is the one person in all the world that Holmes seems to respect.

But, there is no redeeming quality for Moriarty. Holmes says he is a mind capable of making countries or destroying them. That he could perform any criminal act and sleep peacefully that very night.

But, Sherlock Holmes needs to find him. He needs to prove to himself who has the greater mind. This is all that drives both of them closer and closer like two moths to a flame.

And, we can’t help but watch.

Moriarty is a lesson in how to make an intellectual battle better than any action-packed fight to the death.

The mystery of a person in the shadows gives him power. It makes the audience never quite sure of who they can trust, or of what could happen at any moment.

For a writer this style of villain does something to the human brain that makes you unsure if you really want the hero to win. It even did this to Doyle who killed off his holy cash cow, because he wasn’t convinced that Moriarty could be beaten without a real sacrifice. ‘Power is in tearing human minds to pieces and putting them together again in new shapes of your own choosing.’ ― George Orwell, Nineteen Eighty-Four

O’Brien is a member of The Party. What party? The only party.

In 1984, in the world created by George Orwell, the world is in ruins. Three great powers fight unending wars simply to distract their populations.

In the province of Airstrip One, formally Great Britain, O’Brien is a member of the Inner Party. And, he has just found someone thinking the wrong thoughts.

Winston knows thinking anything but what the party tells you is against the law. He changes historical documents every day to conform to The Party’s “correct” view of history.

But, he can’t help himself and so it falls to O’Brien to break him.

O’Brien is different in that he doesn’t really have any say in what he is doing.

Clearly, he is intelligent. He seems able to read Winston’s every move and even his thoughts. But, as he explains to Winston he is merely part of The Party. He is a manifestation of the will of a human hive mind. If The Party wills it O’Brien must comply.

He knows he is completely indoctrinated and that he is being controlled by an unstoppable force of will. But, this doesn’t make him any more an individual than an ant.

Villains are bad because they choose to be. O’Brien is not choosing anything.

He really enjoys his job. Which is to torture and re-educate Winston. However, even this is mandated by the party. He must enjoy it.

Traditionally, our protagonist would break free and kill O’Brien. But, after the infamous Room 101 scene there is nothing Winston would not do or say just to be out of there.

O’Brien is so successful in his breaking of Winston’s mind that the last thought he has is of how much he loves his country. And, that is when O’Brien has him killed. For no reason other than to show that Winston never had any control over his mind at all.

O’Brien shows the reader the power of the state.  He  makes us fear that we would betray anyone and everything we stand for – just for a few more minutes of life.

O’Brien is terrifying because he doesn’t follow the traditional role of an antagonist. He exists to show our hero that there is no hope and is proven right.

We deny the reader any catharsis or release. At every opportunity Orwell will take something from you you didn’t think you had and it will be something you can’t live without.

This is why the only correct reaction to finishing Nineteen Eighty-Four is to curl-up and shake uncontrollably.

This should be kept in mind by horror writers who actually want to frighten their audiences. ‘Perhaps because I’ll never be one, humans are interesting to me.’ ― Jeff Lindsay, Darkly Dreaming Dexter

Dexter is a Serial Killer. But, he only kills other killers.

Jeff Lindsay‘s creation, Dexter Morgan works for the police as a blood splatter analyst. This suits him as it allows him to find his targets more easily.

Dexter follows a code. The Code Of Harry, his adoptive father. Harry knew his son was a violent killer from a young age and decided to focus his sociopathic son on doing something positive for society.

Harry trained him to be a surgical weapon. He would only kill killers, rapists, and similarly bad people. And, he would need proof of their crimes before he did so.

In this sense, he is the protagonist of the story. But, he is certainly not a good guy.

Reading or watching Dexter is like hitching a ride into the mind of an alien. This alien is doing its best to pretend to be human but just can’t understand the rules of society, even though it knows it has to play along.

We are taken on a journey to a very dark place. However, it is also fun and darkly funny.

‘I’m quite sure more people fake an awful lot of everyday human contact. I just fake all of it.’ ― Jeff Lindsay, Darkly Dreaming Dexter

We are treated to witty observations from the mind of madness. It’s just enjoyable.

You don’t always need a good guy or even a redeemable person to be your protagonist. Dexter is broken in a way that can’t be fixed by love or magic, but we still want to follow him into his darkest dreams.

This is the way first person should be used. I think the only excuse for the brute force of a first person perspective in a novel is when you need to make the perspective of a strange character make sense to your reader.

This puts you in their mind. A passive watcher just behind the dark parts of the eyes. From this shadowy place, their world becomes everything and you begin to understand them.

[Read: 9 Ways To Make Readers Care For An Amoral Protagonist]

Here are three compelling monsters for you to consider when making your next villain.

I hope you had fun. They always did.

Tell us who your favourite different baddie is. I look forward to your choices.

by Christopher Luke Dean (No doubt, plotting his escape as we speak!)