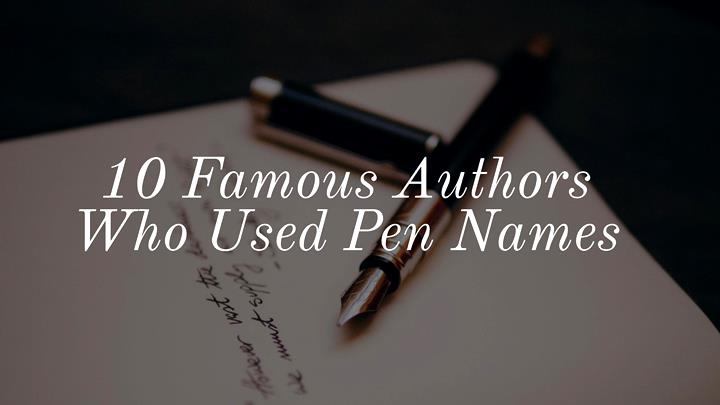 Writers Write is a resource for writers. We’ve put together a post on 10 famous authors who used pen names when they wrote.

A pen name is a pseudonym used by authors in place of their real names.

Writers use pen names for different reasons, including wanting to disguise their gender, to protect themselves, to combine two or more authors into one name, to distinguish their current work from previous publications, to avoid confusion with another author of the same name, or for marketing purposes. The author’s name is often know only to the publisher.

1. Tintin in Tibet by Hergé

Georges Remi originally signed his drawings with his initials. He then turned them around and used “RG” instead, which soon morphed into “Hergé”. (It makes sense if you pronounce the letters in a French accent.)

2. The Bad Beginning by Lemony Snicket

Handler’s greatest creation is his narrator, Lemony Snicket, a sad, lonely and utterly charming character whose melancholy tone pervades the series. Handler originally invented the name to hide behind when he baited neo-Nazis over the internet; his delicious mischievousness jumps off every page.

3. The Adventures of Huckleberry Finn by Mark Twain

Samuel Langhorne Clemens took his pseudonym from the call of sailors on the Mississippi, shouting out “mark twain”, the depth of “two fathoms”.

4. Alice in Wonderland by Lewis Carroll

When Charles Lutwidge Dodgson was thinking of a new name for himself, he took his first two names and translated them into Latin. That gave him “Carolus Lodovicus”. He switched them around and translated them back into English, ending up with Lewis Carroll.

The first readers of Robinson Crusoe’s extraordinary adventures believed that they were reading an autobiography: the title page said Mr Crusoe’s book was “written by himself” and there were no hints to suggest any editors or ghostwriters had been involved. After 28 years on an island, he had dragged himself back to London and penned his life story. .

Carlo Lorenzini was a journalist and satirist who thought his own best-known work was “childish twaddle”, which may have been why he published it under a pseudonym, taking his new name from the village near Florence where he spent his childhood.

Dr Seuss didn’t just invent his own name, he made up the name of an imaginary daughter too, and even dedicated one of his books to her.

8. The Disreputable History of Frankie Landau-Banks by E Lockhart

E Lockhart is also Emily Jenkins, the author of some excellent picture books.

Eric Blair apparently borrowed his pseudonym from the river in Suffolk and added George for its solid Englishness.

10. The Story-Teller by Saki

Hector Hugh Munro didn’t write “The Storyteller” for children, but it is an example to anyone who does.