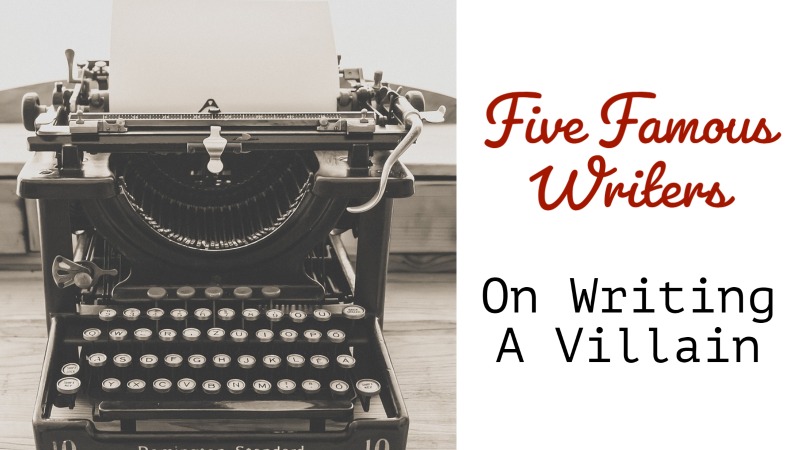 5 Famous Writers On Writing A Villain

In this post, we look at five famous writers on writing a villain. We also include lessons from their most famous stories for you to try in your own fiction.

The truth is that the villain plays an important role in fiction. If the bad guy didn’t exist in a narrative, how would we show the courage and morals of the hero?

Let’s hear it for the mischief makers.

5 Famous Writers On Writing A Villain

Whether they are charming or creepy, beautiful or hideously disfigured, serial killers or petty thieves, the antagonist is often the fascinating focal point of the story, right after the main character.

So how can we make them ‘pop’ on the page? Let’s look at five iconic authors and their famous blackguards.

George Langelaan penned the short story ‘The Fly’, a cult-favourite sci-fi/horror story about a research scientist who turns into a huge monstrous fly. It has been adapted for the screen several times.

In a January 1961 issue of Suspense magazine, he says, ‘As a writer I take such a liking to villains that I try to give them a jolly good time and, in the end, to let them off as lightly as possible.’ (He even proposed the creation of The Society for the Prevention of Cruelty to Villains.)

The take-out: You don’t always have to put the rascal or devil in jail or the grave. Sometimes it’s fun to let them get off scot-free or at least treat the character with some humour or leeway.

Robert Bloch is best known for his novel, Psycho, which was later turned into a terrifying film by Hitchcock. The character of ‘mommy’s boy’ Norman Bates has since become part of popular culture.

It is often written that the author based this villain on notorious killer Ed Gein. However, Bloch had almost completed his novel before Gein’s character profile was fully revealed in the press. In later years, he was surprised to learn how closely the fictitious character mirrored the real-life killer.

The take-out: Sometimes life is just as strange as fiction. The guy next door could be a monster. Your villain can act and behave normally -until he is behind closed doors.

Patricia Highsmith wrote five novels about the anti-hero Tom Ripley, a career criminal, forger, con artist and occasional murderer. She often got the reader to sympathise with Tom and other ‘bad guys’ in her stories and novels.

In her non-fiction book Plotting and Writing Suspense Fiction, she says, ‘Murderers, psychopaths, prowlers-in-the-night are old hat, unless one writes about them in a new way.’  She certainly added a twist to conventional ‘bad’ characters.

The take-out: Your antagonists can be utterly urbane, educated, and good-looking. They don’t have to be brutes with dirty fingernails and a criminal record. Shake up the stereotypes!

Thomas Harris introduced the world to mesmerising serial killer Hannibal Lecter in Red Dragon in 1981. Since then, readers and viewers can’t get enough of him.

The interesting fact is that Dr Lecter was only a supporting character in Red Dragon and to a degree in The Silence of the Lambs. He only took ‘centre stage’ in Hannibal and Hannibal Rising. He is also the focus of the Hannibal TV series.

The take-out: Often the villain will demand more ‘airtime’ because they are so fascinating. Consider making a minor antagonistic character the ‘star’ in your story.

James Patterson has created many super villains in his bestselling novels. Perhaps one of the most memorable is Gary Soneji. He is the wily antagonist in Along Came a Spider. and other Alex Cross thrillers.

In the first novel, Soneji is obsessed with the infamous kidnapping of Charles Lindbergh’s baby son. He also lives as a ‘normal’ family man called Gary Murphy.

The take-out: Your baddies must be an interesting, clever, and hard-to-catch creatures. Give them a motivation for their deeds or a deep, dark personal obsession. Dual identities in the thriller genre work well, too.

Langelaan believed the villain is always fighting a losing fight and loathed by other characters in a story. ‘How can anyone up against such odds not bring you to the verge of tears?’ he asks.

Perhaps it’s time we looked at our baddies with some compassion or, at least, allow them to have some fun before their downfall.

I hope this post on famous writers writing a villain helps you with your characters. If you’re looking for more help, use our Character Creation Kit to help you create great characters for your stories.