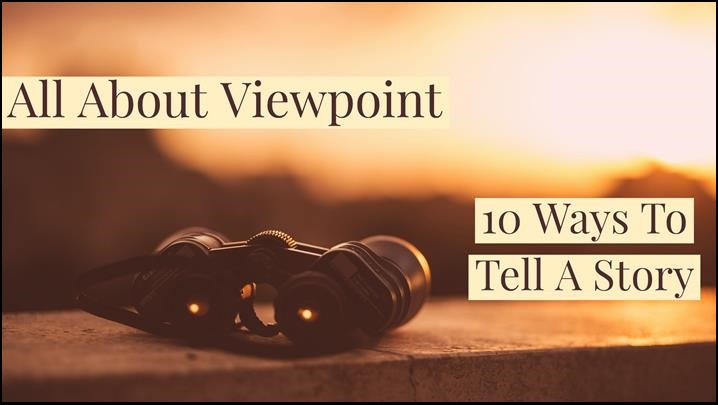 How Viewpoint Works – 10 Ways To Tell A Story

In this post, we look at what viewpoint is, how viewpoint works, and the 10 ways to tell a story.

Which viewpoint should you use?

As a writer you can choose to tell your story using first person, second person, or third person as your viewpoint.

The choice of viewpoint affects the mood created by the author in a story. First person is intimate, second person is alienating, and third person is more comfortable.

There are no absolute rules for choosing a viewpoint for your story. You can even choose to tell the story from multiple viewpoints, although we suggest you have no more than three per novel.

Once you’ve chosen there is one rule you should observe with viewpoint. Never change viewpoint in a scene. This confuses readers who like to be in one character’s head at a time.

How Viewpoint Works – 10 Ways To Tell A Story

We cover viewpoint in more depth on our Writers Write course, but I’ve put together some definitions, and examples here. First Person – The character tells the story, using the pronoun ‘I’.

Example: I walk into the room. I know he’s there in the darkness. I smile as I smell the sunshine and wind in his hair.

This viewpoint is subjective or limited in nature. We only see the story through the eyes of the viewpoint character. Be careful to avoid author intrusion, especially when using first person.

Second Person – The character tells the story using the pronoun ‘You’.

Example: You walk into the room. You know he’s there in the darkness. You smile as you smell the sunshine and wind in his hair.

This is the least common of all viewpoints used by authors. It is used to make the reader feel uncomfortable. The character is often alienated or in an altered state. The reader feels as if he or she is being compelled to listen. Children do not like second person. Examples: Bright Lights, Big City by Jay McInerney, Half Asleep In Frog Pajamas by Tom Robbins

Third Person – The narrator/author tells the story using the pronouns ‘He’ and ‘She’.

Example: She walks into the room. She knows he’s there in the darkness. She smiles as she smells the sunshine and wind in his hair.

Tip: If you don’t know which viewpoint to choose, write a scene in two or three different viewpoints. Read the scenes out loud and you will hear which one works best for your story.