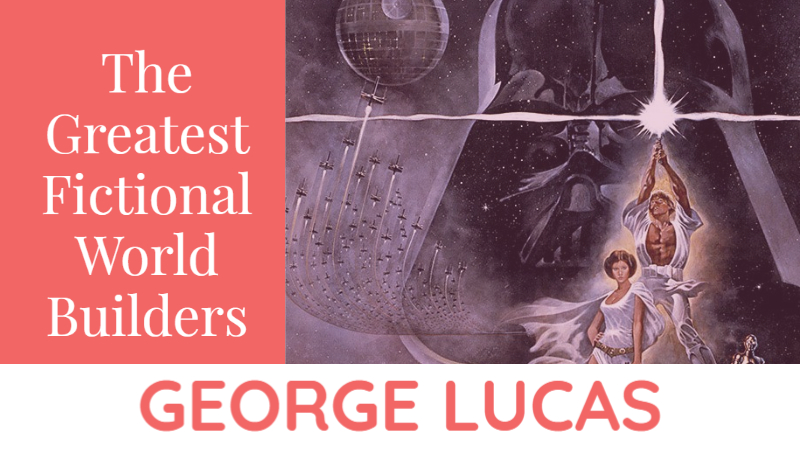 Welcome to the fifth post in my greatest fictional world builders series. This series is a reference and a resource for writers who are building their own worlds.

We started with Terry Pratchett and J.R.R. Tolkien. Then, we moved on to Robin Hobb and J.K. Rowling. In this post, we look at George Lucas.

George Lucas is possibly the most successful writer/director of all time. In this article we will take a look at what makes his space fantasy worlds stand out, and why so many people around the world are so drawn to his work. He will be our first non-author and a unique example of other creative areas that need world-building.

He made Star Wars. This is the single most successful movie franchise not based on a novel or comic.

I probably don’t need to tell you that Star Wars is a space fantasy made in the tradition of Space Operas like Flash Gordon. And that it is about a farm boy who becomes a magic space knight to help a princess destroy an evil empire. So, I won’t.

Star Wars is the gold standard of world-building. It was lightning in a bottle in the 1970s. A world so new but familiar that nobody knew quite what it was. But, people liked it.

In fact, they liked it so much it was the highest grossing film of all time when it came out. And, adjusted for inflation, it is still number two. (Gone With the Wind is number one)

Up until this time, science fiction had been unrelatable. It had a glossy, polished look that was high-tech and high concept. Films like 2001: A Space Odyssey were long, boring, and both technical and intellectual. It is a real force of will to get through some of them.

Star Wars was gritty, grimy, funny, exciting, and entertaining. People started to say it looked like a “lived-in world”. That is it was not just a set that was shiny and new; used once then discarded.

It made room for the more realistic and dark images of the future that we saw in the ’80s. Like Robocop and Blade Runner.

Star Wars looked like it smelled of oil and sweat. People had run-down spaceships and dirty clothes. They weren’t scientists; they were fighters, farm boys, and space pirates.

They went on adventures and fought evil Space Nazis. But they did it in spaceships with turbo lasers alongside mystical space wizards. There is nothing boring about Star Wars.

He excels in pop/pulp fiction. Indiana Jones which he created with Steven Spielberg was a tribute to the action-adventure films of Lucas’s youth. Much like Star Wars, even starring one of the same actors, it captured a feeling of fun, romance, and adventure without a moment of boredom.

As both these series entered their fourth movie some problems in writing and directing would become more evident, but in the ’70s and ’80s he could do no wrong.

The Galaxy of Star Wars began as all good worlds do – with a bunch of scrawled drawings and notes. Lucas originally intended to make a Sunday children’s program much like Flash Gordon, which was a series of comics modelled after Edgar Rice Burroughs John Carter of Mars (Barsoom Series).

However, after the success of American Graffiti and the founding of Lucasfilm he wanted to make a space opera instead. He had also tried and failed to get the rights to Flash Gordon.

George Lucas is a well-educated man and had enjoyed Narrative Theory in university. In particular, he follows The Hero’s Journey. This is an idea by Joseph Campbell which you can find out more about here: The Hero’s Journey

Lucas was determined to incorporate these fundamental story ideas into his space opera. This is what gave Star Wars the universal appeal to succeed in a space formally occupied by niche audiences like Star Trek.

It also made it okay for “normal” people to like science fiction without the stigma associated with fans of Star Trek or similar franchises. Not least because every man, woman, and child wanted a light sabre the moment they saw one.

In addition to Lucasfilm he had just founded Industrial Light And Magic. This is the company that would go on to create the special effects for all your favourite movies, and still does, although under the Disney Corporation’s control.

With these two companies, he wanted to merge technical writing with technical special effects. Ironically, this produced one of the most organic feeling movies of all time.

Lucas likes to engage with his material for a long time before he starts a script. For Star Wars, he made several draft stories which you can read in a special series of comic books. This story was very different to the final script and probably would not have been the smash hit that Star Wars was.

After several revisions and the advice of several people, notably his then wife Marcia Griffin who was also his editor, he ended up with a much more down to earth script.

This was good because Star Wars was not a big production. They had a medium budget, only $11 million, and so they had to work within their means. This was probably good because it made Lucas use more real life locations and less fanciful props.

But, things did not go as planned and, while Star Wars was shot with very impressive space battles and glorious special effects, apparently the first few drafts were embarrassingly bad.

It was however saved in editing, and with the help of John Williams’ score, it would go on to be one of the most iconic movies of all time.

This shows how important it is to show your work to experienced editors.

Lucas loved pulp fiction. He grew up on space serials and samurai films. He was also a huge fan of World War Two films. In particular, he loved The Dam Busters movie, which was about a bombing run conducted by the Allies in World War II.

This influenced him to make space battles a vital part of Star Wars. We can see just how much in the various bombing runs that happen in the Star Wars franchise.

He would also incorporate his love of samurai sword fighting (see Kurosawa’s Seven Samurai) and eastern spirituality in his Jedi characters in Star Wars.

I feel that after producing both a failure (THX 1138) and the successful American Graffiti, he didn’t know if he would get another chance to make something quite like this. So, he put all his favourite elements into this one film.

Luckily, everyone liked it.

The ’70s and ’80s were a reaction to the small, emotional movies of the ’60s. The action blockbuster was on the rise and people were willing to spend big money on entertainment again.

The world was at peace, with the exception of the Cold War tensions, and America wanted to have fun with its media.

In particular, people wanted to see a black-and-white, good-and-evil story to escape from the threat of nuclear war and the constant spy tensions with Russia.

It was a time when people were beginning to forgive Japan and to appreciate Japanese Culture. At the same time, people were looking for a replacement for the Westerns of the ’60s.

Fortunately, Star Wars with its Space Western feel and pure struggle of the Light versus the Dark hit just that sweet spot. It didn’t hurt that the cowboys had blasters and light sabres.

Lucas has been unwavering over the years on this point. He was making Star Wars for children and only children. He wanted to make something he would have liked to watch as a child.

Luckily for him people don’t ever really grow up. Star Wars appeals just as much to the 70-year-old as it does to the 10-year-old.

With this in mind, you can see why Star Wars aims for more childlike elements than more realistic plot points. This gave it a pure image as a wholesome franchise. Unfortunately, this was not honoured after the sale to Disney but we can’t blame Lucas for that.

Star Wars: A New Hope is the first Star Wars film. It contains all the elements I have talked about above.

However, Lucas is not the best director and so Star Wars: The Empire Strikes Back, where he let Lawrence Kasden direct, is a more polished film with better pacing.

Star Wars: The Empire Strikes Back

is widely considered in film circles as an example of a perfect film.

is the movie that allowed Lucas to have a career. It is a small film about growing up in the 60s. It follows several young people and shows Lucas’ love for motor racing.

Watch this to give you an idea of who he is as a person.

This is the perfect synthesis of what Lucas does well. Indiana Jones and the Raiders of the Lost Ark

is directed by Spielberg, but written and produced by Lucas. When this happens, you end up with an interesting world, compelling characters, and a well-paced story.

It’s about Indiana Jones adventures as he fights Nazi’s and raids ancient temples.

This is a great example of what can be achieved by fruitful co-operation between creative people.

There is a lot to learn from Lucas, both by looking at what not to do and what he did well. How Star Wars Conquered the Universe does a good job of analysing Lucas’s life and success.

Star Wars has influenced more creative people than any other movie. Over the last 40 years we have seen how Industrial Light And Magic built the special effects industry into what it is today.

Lucas’s style and attention to theory and structure has become ingrained in the way well-run movie studios do business today.

Without his work we could not have the 20 movie series we are seeing from studios like Marvel. And, we can see that those studios who ignore, this like DC and Universal, can’t sustain the momentum.

George Lucas accidentally became one of the most influential directors of all time, despite being quite bad in that role. His outstanding world-building and theoretical understanding of concepts like The Hero’s Journey allowed him to create such compelling worlds that they have gone on to live their own lives.

by Christopher Luke Dean (Who would cut off his own hand for a light sabre and an X-wing.)