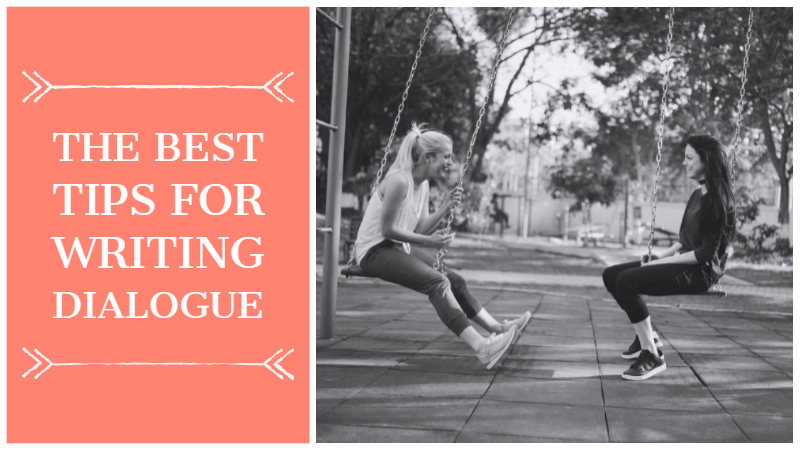 Use our 3 best tips for writing dialogue to help you write great stories.

Dialogue is difficult for writers. As a general rule, writers are not the kind of people who get out much and, when they do, they tend to socialise with the same group of friends.

This doesn’t help them create varied and interesting dialogue interactions.

So, I have made a foolproof system to identify poor dialogue choices, and I have given you tips on how to correct them. Better still, there are only three steps.

But, we need an example to work with. Let’s use some dialogue from the Star Wars prequel. It’s some of the worst and clumsiest ever written.

In Star Wars Episode 2, Anakin (Darth Vader) is speaking to Padme. He has been assigned to protect her from assassination attempts. However, it is clear he is obsessed with her and can’t contain his feelings.

“…I’m not afraid to die. I’ve been dying a little bit each day since you came back into my life.”

The 3 Best Tips For Writing Dialogue

It is vital that you are well-read in order to see how bad or good your dialogue is. It also helps you see if it fits the genre.

The tone and sentence structure of Anakin and Padme’s dialogue interactions in Star Wars Episodes 2 and 3 are very obviously meant to invoke Shakespeare. Probably, Romeo and Juliet.

These lines are not organic. They sound like a dramatic play. Which is why they worked for Shakespeare. He was creating an over-the-top, tear-jerking drama. I’m not saying that this type of dialogue can’t work, but it has its place and time. England, 1595.

In a fast-paced action film with laser swords, you want quick, functional dialogue in order not to slow down the pacing.

If you need some downtime dialogue, you should put it all in one scene. For example, in Avengers: Age of Ultron, all the drama happens after a break in the action to give the audience a breather before the third act.

In this light, let’s make the dialogue faster and more to the point.

It is still overly dramatic, but perhaps something a real human might say.

You must read your lines out loud and listen for anything strange.

Just saying any of these lines makes you question whether Goerge Lucus has ever spoken to another human.

Even my shorter version is no better.

To make this work, we must think about what Anakin is trying to say.

He is frustrated and can’t be with the person he loves. He wants to tell her that.

Should he tell her she is killing him? What is the point in making it clear to her that he, a warrior knight, is not afraid of death?

Perhaps he could say, “Not being with you is killing me…”

It shifts the blame to him. This is less creepy than accusing your would-be-girlfriend of killing you a little bit each day.

Watch the scene play out in your head.

Make the actions of your characters follow their words. In this movie both of the actors are just sitting or standing, delivering these lines.

This inaction makes it awkward for the viewer or reader. Body language tells us more about emotion than words.

In a book you should punctuate your characters words with action, but don’t overdo it.

Anakin could not sleep. He left his bed and went to check on the senator again. She seemed to be asleep. He closed her door, walked a few feet, and sank down against the stone wall.
He dragged his hands down his face and muttered to the night, “Not being with you is killing me.”
Glancing up, he noticed the door ajar before it quickly closed again.

This is not great, but it makes Anakin less aggressive and more relatable.

He is not shouting strange, angry lines at Padme’s face. Rather, it is an accident that he was found out at all.

These considerations give your character more humanity and dignity. They also stop it seeming like a high school production.

A real person would probably build up to blaming the love of their life for their death. Over the course of a marriage, at least.

However, you need to get on with the story. Having your characters spied on or overheard is a good way to do this without having an awkward conversation.

The real problem with dialogue is not experience.

You don’t have to be worldly, or even the same sex as your character, to write about other people. Many men write very well in a female voice and vice versa. Robin Hobb writes juvenile boys very convincingly and I guarantee she has never been one.

Terry Pratchett said that in order to make something unreal into something very real, you had to take it more seriously than reality.

Suggested reading: Why Method Writing Makes You A Better Author

Don’t use accents unless you know them better than the people who use them in real life. Stephen King writes at length about this in his On Writing. He advises that clarity and emotion are what people remember when they think of characters. Seldom do you remember a piece of dialogue because it was delivered in an Irish accent.

In fact I challenge anyone to recall anything Brad Pitt said in Snatch.

If you want to vary your dialogue with accents and fancy words, or with down-to-earth slang, there is no easy fix. You will have to internalise those voices. You can do this by reading widely, or watching movies, or even doing field research in rural England.

None of it will just be there.

But, your own voice always will be. If you want to be believable, just use it. You can’t go wrong with your own words.