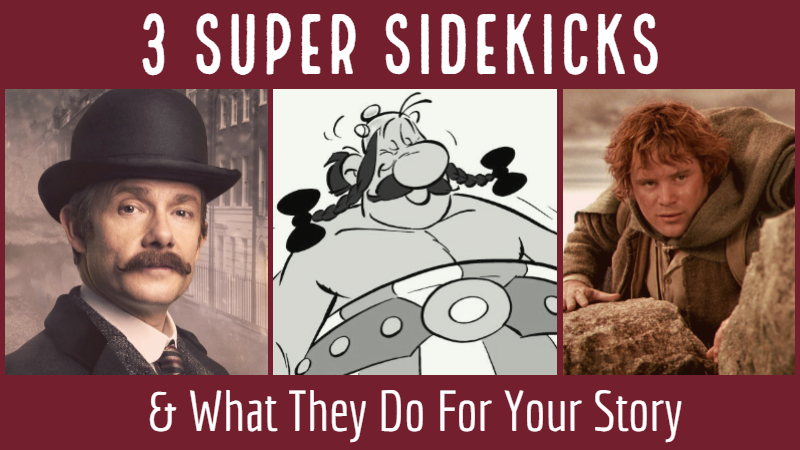 This post is about three super sidekicks and what they do for your story, why they are important, and what writers can learn from them.

In previous posts, I wrote about 3 Truly Odd Protagonists and 3 Dastardly Different Villains.

In this post, I write about three super sidekicks and how they can be useful for plotting and for character development.

So, here is a post about three sidekicks and what they do for your story. It is about how they make stories better. I look at what makes them different and necessary. Hopefully, you can use this to learn how to write a compelling, page-turning companion for your hero.

What Is A Sidekick?

Sidekicks are not just superhero servants. They aren’t just underage boys hanging around with reclusive billionaires dressed as bats. Robin from Batman is probably quite a bad example of a sidekick because he is never crucial to the story.

If you are considering using a sidekick…

You should ask yourself: Is a sidekick necessary for my story?

Never have a sidekick without a reason. You won’t know what to do with them and it will just confuse your reader.

3 Super Sidekicks & What They Do For Your Story “Under such circumstances I naturally gravitated to London, that great cesspool into which all the loungers and idlers of the Empire are irresistibly drained.” – Watson

Doctor Watson, from the Sherlock Holmes novels by Arthur Conan Doyle, is one member of the world’s most iconic crime-solving duo. Holmes and Watson go together like tea and scones.

John Watson is a perfect gentleman. He is a trained doctor who served in the imperial army until he was discharged due to a leg injury. This gives him his distinctive limp and cane.

To Sherlock Holmes, he is perhaps the only person in the world who could stand to live with him.

Watson is also easy to relate to. He is a nice person. He cares about others. He is a bit lonely.

Importantly, he is always there to point out how strange Sherlock Holmes is. And, of course, he helps out in fights.

Watson, unlike most sidekicks, is also the framing piece of the story. He is the narrator.

The conceit is that Watson is writing about the adventures of Sherlock Holmes and so everything is from his perspective, and, in his voice.

This makes for a very interesting effect on the reader who is always left in the dark as to what Holmes is thinking.

Because Watson is clever without being brilliant, we never get to see how the mind of Holmes works. We only hear Sherlock explain how he solves his mysteries after the fact. Thus, we are never sure if he is in fact mad, or a genius ,or both.

This lends Holmes an air of mystery, and it makes us sympathise with Watson and his challenges with dealing with Holmes.

Without Watson, the Sherlock Holmes books would have no human emotion. Holmes would just go about his job, all the while getting depressed and shooting holes in his wall, never having anyone he respects to talk to.

Watson always wants to know what is going on. He asks questions that the reader would ask Holmes. He makes assumptions for the reader. This draws us in and engages us in the story. It makes Holmes seem brilliant rather than insane.

It also makes us care for Watson since he seems to care quite a lot about everyone else. In fact, Watson’s love interest and his fears are at the heart of these stories.

We often see sidekicks as nothing more than a plot convenience. They give the protagonist an edge, or help move the story forward.

But, without Watson, the series of books could not work on any level. He is the lens through which the story happens. He sets the tone of the book and tells the story at his own pace. He is what makes Sherlock Holmes fascinating.

In Watson, you hear the voice of Arthur Conan Doyle. Since he is “just” the sidekick, it seems much more subtle than it really is. Through Watson, Doyle got to say whatever he wanted to without putting it in a clumsy metaphor.

Writing Tip: Watson works well as a sidekick because he is so well-developed as a character. We know what he hates, who he loves, and how much stress Holmes puts him under. These are endearing things to know about a sidekick. He never simply exists to further the plot. This makes him feel real and by extension the rest of the world does too. Samwise Gamgee is a Hobbit from The Lord of the Rings by J. R. R. Tolkien. He is Frodo’s gardener/manservant. There is nothing upper-class about Sam. He is as down-to-earth as any country bumpkin you could think of.

He goes on a great quest with his master not really thinking about what he is doing. But, he loves old stories and songs and really wants to be part of a good old story – one of “the ones that really mattered”.

Sam is not brave or foolish. He is not very smart, but he is clever in a practical way. He hasn’t been properly educated, but he can read. In short, very little makes him stand out.

Early on, he promises Gandalf that he will see Frodo through to the end.

The quest turns into a hellish nightmare through dark caves, ghoulish swamps, and ash-dusted plains covered in monsters.

He is the most loyal friend a person could ask for. Through thick and thin, he always sees some good left in the world, and, for that, he is willing to fight.

From a writer’s point of view, he is a good device to pluck at your readers’ heartstrings. He doesn’t want to be brave, but he gave his word so he is going to be. He is a symbol of loyalty and honour found in the most unexpected places.

He comes from a tradition of loyal manservant characters in fiction. However, Sam stands out as one that gradually becomes more and more the focus of a partnership with our protagonist. He is essential for the telling of the story.

Sam’s steadfast resolve to help Frodo allows Tolkien to show us just how damaged Frodo has become by the end of their quest. Sam has remained whole, but Frodo has broken and without Sam’s support, the quest would have failed.

Making the sidekick the stronger in the relationship was, and still is, not conventional. It adds a nice dynamic to the story. This bond of friendship is shown to be the saving grace of this story, rather than magic swords or spells.

From Samwise, we can learn how to make a seemingly unimportant character matter. They don’t have to be the hero or do anything dangerous. Although, Sam does.

He is there to remind us about the important things in life. And, that those things are not about dark lords, or the end of the world.

That makes us put into perspective just how horrific war, death, and oppression are, and what people should really be fighting for.

As a side character, he becomes the voice of the author in a subtle way. He sometimes carries the plot forward, and sometimes pokes fun at the ridiculousness of the situation he finds himself in.

In Sam, we find every definition of support. He holds the quest together. He holds Frodo’s mind together, and he gets them to the end of the story. He really carries the whole story, while never really seeming to be a main character.

Writing Tip: Don’t attempt an accent with a character like Sam. His mannerisms and actions construct one for him despite his words being perfect English. He sounds like a country man in your head because he acts like one. Not because his words are all jumbled up. ‘”There are not two fatties! There’s only one, and he isn’t fat!” —René Goscinny (Asterix in Britain)

He is part of the heroic duo, Asterix and Oberlix, created by Albert Uderzo and Rene Goscinny. He is a beloved comic character; hopefully one you grew up with.

Obelix is known for having fallen into “The Magic Potion” as a baby. This gives him super human strength. He is a member of the last holdout village of Gauls still bravely standing against the Roman Empire.

Obelix has never had to grow up really. He has, for the most part, been a nice person, but any character flaw he has, is not brought up. You would not want to provoke a man with god-like strength.

He is fat, but you had better not call him fat unless you want a fight. He is impulsive and charming in how simply he sees the world. He becomes angry easily and thinks everyone else is to blame except for him.

Somehow, none of this makes us hate him. For the most part, people who read Asterix will remember Obelix most fondly.

To him, the world is a simple place. He can go hunting wild boar and terrorise the local soldiers as a sport if the fancy takes him. Obelix sees the world differently and does not understand authority.

His lack of fear makes him compelling. He is a man who has grown up without any physical thing that can threaten him. Asterix has also protected him from emotional harm. This makes him a man who is innocent in a way that is delightful to watch.

He does not worry about attacking an army by himself because he would win. But, he is easily embarrassed by the attention of a young woman or by the mention of his weight.

This makes a compelling duality for the authors to play with. He is a short-tempered, childish god of a man who can be ordered around by his short, weak friend, because that is just how he sees the world.

Obelix should be ruling the world, but he’d rather hang out with his friends.

We learn that a sidekick does not actually have to be useful. More often than not, Obelix will ruin Asterix’s plans by not understanding them or just by being pig-headed.

This creates tension. It builds humour and fuels hi-jinks and other antics.

It’s enough that Obelix exists. He does not need to carry the plot.

This only works because it is more important to Asterix that his best friend is happy than actually pulling off his hare-brained schemes.

Having a sidekick like Obelix is effective when the point is simply to enjoy the experience and have a laugh.

Writing Tip: Contrast is important. Obelix is big and strong, but dumb and greedy. Asterix is small and weak, but cunning and prudent. Together they make each other better and bring out their best qualities. It’s often effective in writing to play off a duo like this to highlight what you want the reader to notice.

We hope this post showed you what sidekicks can do for your story.

by Christopher Luke Dean (Who often wished he’d fallen into the magic potion when he was a baby.)