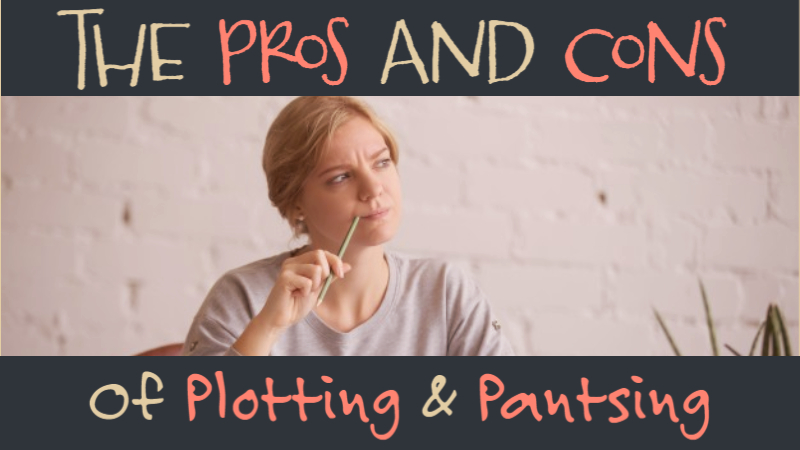 Have you tried to plot or are you more of a pantser? In this post, we define plotting and pantsing and look at the pros and cons of each.

I am a former Pantser who apostatized to become a Plotter for years; as such, I’ve spent roughly equal time in each camp—equal time using both methods.

Guess what? I’ve run into obstacles no matter which method I use.

And now? Well, now I fall somewhere between the two ends of the spectrum (as most writers do). Rather than working from a strict outline or writing blind, I write with a few questions in mind as a guiding light. This allows me to have a general idea of where I’m going while keeping a sense of wonder and discovery throughout the process. But I’ll get into that more in another article.

For now, consider this metaphor:

Now, I have a destination in mind; I know the pit stops so I don’t run out of gas, but I ditched the itinerary. If I stumble across some unexpected roadside attraction, I might take a brief detour to check it out.

All that to say I see the merits of both sides. My goal isn’t to argue in favour of one side or the other. There are a lot of fantastic writers who are so dedicated to one end of the compositional spectrum that they espouse an exclusive dogma, even going so far as to say that authors on the other end of the spectrum aren’t real writers because their method is too mechanical or too mystical.

Sorry, but I don’t have time for that kind of negativity and tribalism, so you won’t find any of that here.

Okay. Now that we’ve taken care of that—let’s dive in!

The Pros And Cons Of Plotting & Pantsing

When I was studying creative writing in undergrad, it was tacitly understood that, if you ever wanted to be a proper writer, you had to be a Pantser. I imagine this was because pantsing had an almost mystical appeal to it. You were tapping into your unconscious—receiving direct inspiration from the Muses!

The only problem was, for me, instructions were not forthcoming. Maybe I had displeased the Muses in my childhood by sticking too closely to the chore chart my parents made for me. Whatever the case, I would sit at my laptop for hours and stare at the blinking cursor, taunting me, my mind as blank as the document before me.

I would sit like this every evening until a day or two before a story was due to be workshopped. Then—in a frenzy of desperation—I would word-vomit whatever came to mind. Often these stories would start weak, get stronger toward the middle once I’d gotten into a rhythm, and then fizzle out at the end.

But–after we workshopped these pitiful stories– once my classmates and professor highlighted what was working and what was extraneous? Then, in revision, the pieces of the story began to come together for me! And that was thrilling—to see a clear picture of what the story might be emerge once I’d seen it through the perspective of a dozen other writers.

However, by far the most helpful approaches to writing this way were a few techniques my professor at the time taught us: taking inventory, the motivational continuum, and looking back at the beginning to find your ending.

I was introduced to the concept of plotting a few months after I graduated with my degree in creative writing and, while at first I baulked, in time I found my mind expanding with the possibilities it presented.

See, the workshop leader who introduced me to this concept explained that the idea that plotted stories are, well—plot-driven–and pantsed stories are character-driven is a false dichotomy.

“What is a plot?” she asked.
“What the protagonist does, I guess,” I said.
“Good,” she replied. “How do we reveal the protagonist’s character?”
“Through their actions—through what they do.”
She smiled at me.
She was kind enough to trust me to do the math from there. If the character determines the plot, and the plot reveals who the character is—they are virtually the same thing.
“So,” she began, “still think plot is a dirty word?”

I wasn’t sure. I knew I was mad—mad that she would so boldly dismantle a dogma I’d held sacred for years.

But, once I cooled off, I tried the scientific approach. I decided I’d learn about the principles of plotting, try them out, use what worked for me, and dispense with what didn’t serve me.

Over the next few years. I devoured every book I could get my hands on about plotting and the different plot structures. I learned that there as many approaches to plot structure and plotting as there are writers—no two are alike. And, even if ten writers worked from the same general outline, the variety of their unique writing styles would make it so no two stories were alike.

So, even if you don’t think of yourself as a plotter, consider learning the fundamentals of plot and structure—you might find it sparks inspiration rather than stifles it, that it might present new pathways, rather than cut them off. After all creative limitations don’t necessarily pin you in artistically; often they help define your art’s shape.

In the end, all you need to know is that Plotters and Pantsers represent two tiny cross sections of a vast spectrum of writing styles. No writer is fully one or the other. And there are successful writers on both sides:

If you’re a Pantser, you might spin your wheels in some stories, some stories might stall out altogether. But, if you prize a sense of wonder and discovery and freedom in the composition process, a few lemons will never detract from the joy you get from those stories that run smooth from beginning to end. The stories that take you on the adventures of a lifetime.

If you’re a Plotter, you might find some of your stories are a bit too similar. They are fine at the technical level, but they feel a bit… mechanical and uninspired. But, when you craft a story that is flawlessly paced, and you stick the ending? Few things are more satisfying.

Wherever you fall on the compositional spectrum, avoid putting down writers in a different camp. Instead, consider asking them to teach you about their method. Go ahead– try it out! See if it works for you. If not, no harm, no foul–keep doing what works for you. But, in trying a different approach, I guarantee you will learn and grow in your craft.

As Hemingway said: “We are all apprentices in a craft where no one ever becomes a master.” If that’s true, the best we can do is apprentice ourselves to every writer we meet, to learn with and from our fellow travellers.