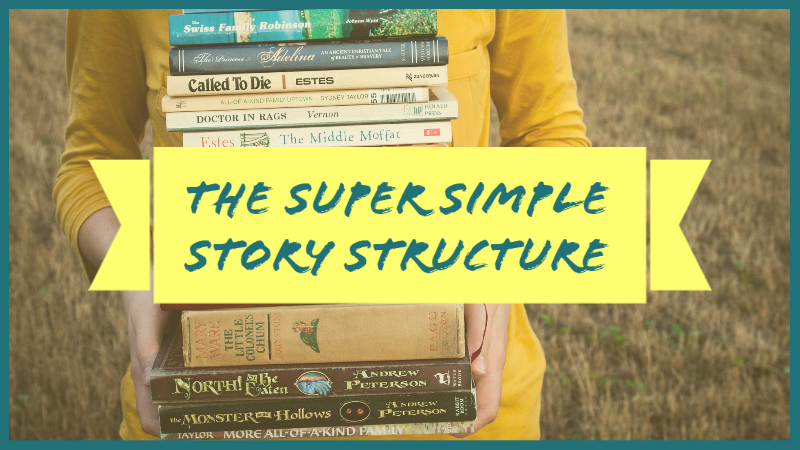 Are you looking for a great plotting formula? In this post, we look at a super simple story structure and tell you how to use it.

Do you find most plot structures too restrictive? Do you also consistently struggle to structure your stories and bring them to a satisfying conclusion?

If so, you’re not quite an Architect (Plotter). Ya know, a writer who plans everything out ahead of time.

But, at the same time, you’re not having much success as a Gardener (Pantser) either—that is, a writer who just starts writing blindly, hoping you’ll stumble into a compelling story.

What if there was a third way? A compositional route that falls somewhere between these two extremes.

Well, the truth is Architecture (Plotting) and Gardening (Pantsing) are on a spectrum of approaches to writing. Every writer falls somewhere on that spectrum, closer to either end—but few are purely Architects (Plotters) or purely Gardeners (Pantsers).

But I think I’ve found a method that is a happy middle ground. It allows you to write with a sense of discovery while making sure you never get lost in the weeds.

And, best of all, it is super simple!

All you do is draft your story with five questions in mind.

As long as your story answers all five questions by the story’s end, you can be confident you’ve got a solid draft.

Ready? Let’s look at those questions!

The Super Simple Story Structure & How to Use It!

1.) What does the protagonist want more than anything? (Goal)

It gets old quickly.

Make sure your protagonist wants something badly and the audience knows what that it is so they can cheer them on toward the finish line.

Let’s examine the metaphor of story as a race a bit more deeply:

Imagine watching a race with no known finish line. Wouldn’t be much fun to watch, would it? Without the proper marker, you would have no way of knowing if the runners were approaching the finish line or moving further away. You wouldn’t even know which racer was ahead the racer you’re rooting for. And, without a clearly-defined finish line, it’s literally impossible to experience any sense of drama or anticipation that normally accompanies watching the runners approach a finish line, because you can’t know who is leading , and by how much.

2.) How does the protagonist plan to get what they want? (Plan)

Okay, let’s assume you’ve laid out your protagonist’s goal, but you’ve failed to make it clear how they plan to achieve it—what strategies they plan to use.

Consider another sports metaphor: You are watching a sport for the first time. You’ve been told the aim, but not the rules. You can tell the athletes are spending a lot of energy and effort, but you can’t figure out why one strategy gets the athlete a penalty and boos, while another elicits awed silence followed by riotous cheering.

Make sure your audience can understand why the protagonist chooses the strategy they do in an attempt to achieve their goal.

3.) What is the protagonist willing to risk losing to get what they want? (Stakes pt. 1)

If your protagonist wants something but they aren’t willing to sacrifice life and limb, sanity and reputation, the audience will conclude that the protagonist’s object of desire isn’t that important to them.

A Soccer (Futbol) goalie jogs to block a long shot, but stops short, hands on their hips to watch it go in the goal. Maybe they could have stopped it had they sprinted and dived to block the shot… but, nah—they decided it wasn’t worth it.

Now picture a goalie who not only sprints and dives to block a shot, in doing so, they land on their arm wrong and bust their head against the side of the goalpost.

Even if that second goalie fails to block the shot, you can’t help cheering for them. Why? because stopping the goal meant more to them than the first goalie—it meant so much, they would risk their health and well-being.

Make sure we understand how badly your protagonist wants to achieve their goal, so we can cheer them on with pride—even if they fail.

4.) What is the protagonist worried might happen instead if they fail? (Stake pt. 2)

A compelling goal pulling your protagonist forward is a brilliant start for a story. But—believe it or not—it ain’t enough. We need something driving—pushing, chasing—them forward too. Something they fear. If it catches up to them, it might destroy not only all hope of achieving their goal—it might destroy the protagonist themselves. [There should be consequences.]

Let’s take a break from the sports metaphors (phew, right?).

A woman runs toward a dock, trying to jump onto a boat departing a secluded island. Time is of the essence, sure. But now imagine a jungle cat is after her and gaining fast.

The suspense has gone from high to off the charts. While it would be hard to survive alone on an island for very long, the pursuing jungle cat dramatically decreases the woman’s chances of survival if she fails to reach the boat in time.

Ask yourself: “if my protagonist’s goal is their dream come true, what is their waking nightmare?”

Now, be a jerk and release their nightmare and sick it on them—if they cannot achieve their goal, they will face their worst fear.

5.) Why does the protagonist want their object of desire? (Motivation)

‘Last but not least’ is an understatement here. Even if we know:

Well, your audience might chuck your story across the room and warn all their loved ones not to waste their time with it.

Consider this scenario—a fantastical re-imagining of the previous example:

A woman flees an ominous figure astride a monstrous creature, hot on her tail. She runs across a landing pad atop a mesa toward a low-flying airship with a mysterious package in hand.

Further behind her pursuer is an approaching army, just waiting to get within range to fire at the airship.

The fleeing woman draws a laser sword and… lops off an arm, letting it fall so that her pursuer’s monstrous steed might pause, distracted by the morsel. The distraction works—the creature stops to gobble up her arm, flinging its rider headlong over the saddle onto the ground. This buys the woman just enough time to reach the airship… but it’s too far away for her to make the jump.

She pauses at the cliff’s edge, takes a deep breath, and tosses the package as hard as she can toward the airship and someone on board catches it. Then, slowly, deliberately, she turns to face the oncoming hoard, laser sword drawn.

Wait, what? What was in the package? What could be so important that she would risk life and (literally) limb?

Although this little sketch answers four of our five questions, if the audience never learns the why behind it all, the story will be ultimately unsatisfying.

So—make sure you (the writer) and the audience understand the character’s why—their reason behind everything they do.

And that’s it! It’s as simple as that.

If you can answer all five questions by the end of your story without losing your way pursuing tangential story questions, you won’t have to worry about all those confusing plot points or structures. And your story will unfold much more organically to boot.

Go ahead—give this method a shot and write your own sketch in the comments below. The results might surprise you.

TIP: If you want help with your elements of fiction writing, buy The Novel Writing Exercises Workbook.

Oliver earned his BFA from the University of Memphis (2015). After graduation, he worked as an editorial assistant for The Pinch (’16). Currently, he works as a manuscript analyst and is an MFA candidate at the University of New Orleans. He is the author of The Fantasy Workbook.