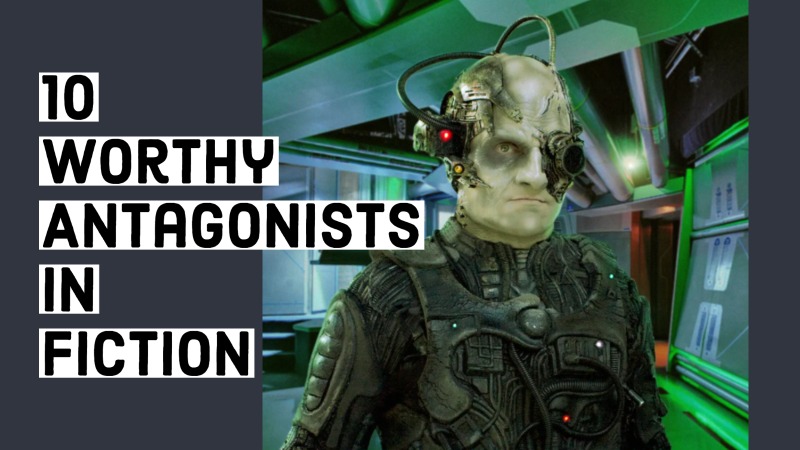 This post is about the interesting, worthy antagonists you can write in fiction.

It’s not an exhaustive list of the best antagonists, but just a few examples that I think are helpful to understand certain archetypes.

I will look at them from the point of view of the reader and writer. I also include tips for how to include them in your work.

Read: The Antagonist As A Literary Device

10 Worthy Antagonists In Fiction & Tips For Writing Them

The Lord Ruler is your classic God-Emperor-type. That is to say, not a god at all, but pretending to be one. The Lord Ruler is a seemingly immortal and indestructible man who has ruled over a dystopian early Renaissance-like Empire for a thousand years.

It seems as if it’s impossible to defeat this enemy. We are told that he has been burned to a crisp, shot, stabbed, and even beheaded. All this did was make him mad enough to brutally murder those around him at the time.

In this book, Sanderson really sets up just how feared The Lord Ruler is and what he is capable of doing. For example, we learn that the ash that falls from the sky in this nightmare world was his doing, and that he has created various horrific monsters to do his bidding. He also seems to be able to make the general population more servile with his magic.

This sets the goalpost nice and high and when he does get defeated, it really feels earned. Unfortunately, the subsequent books in the series fail to deliver a similarly satisfying villain.

Sauron and Voldemort are your standard ‘Dark Lords’.

They lead armies of evil to bring an age of terror to a world in which only they shall have power. Both are magical and control mythical monsters and evil beings.

Writers and readers don’t have to think too hard about them. We all know the stereotypes and can just accept the premise. Dark Lord + Hero = Story. It’s an older formula, but it checks out.

That is not to say you should be lazy in making them. By all means make them compelling. Not that either of them are.

On the other hand, if you are intent on giving as much time or space to your protagonists as possible, then these cookie cutter villains are a real lifesaver. Not literally, of course. They get on with the job of being evil and providing goals for your protagonist to achieve without taking up too much space.

We hardly ever see Voldemort and we never see Sauron. Truly, they are very considerate to busy authors who already have too many heroes to deal with.

From Gene Roddenberry’s Star Trek: The Next Generation

Who doesn’t like hive-mind space zombies? They are a collective entity that does not think like an individual. This makes their goals troubling and their behaviour difficult to predict. Plus, they infect anything living or mechanical they touch, corrupting it to their will.

The Borg are smart and fearless. They work as a collective and are willing to sacrifice thousands to achieve any goal. They believe they have a destiny to control all life and will stop at nothing to dominate the galaxy and beyond.

They really believe they are the good guys. Saving people from lonely lives and bringing them into the comfort and light of the collective hive mind. Saving them from selfish thoughts and desires.

They are also never really defeated. Sure, the good guys always get away, but we are always left with the feeling that eventually The Borg will be the winners. They just don’t care if it takes them a month or until the last embers of the final star in the universe burns out.

To them, it is obvious that all resistance against them is futile and that only they will remain when all is said and done.

Perhaps not the best show out there, but the villain is one of the most upsetting I have ever seen.

Killgrave, a stupid name, has the ability to control any person within a certain distance to him. They can’t resist, they can’t fight back, and they can’t even think their own thoughts.

He’s repulsive and kind of likeable. He has just the right personality you would expect of a monster that has just ordered everyone in his life to do what he wants from an early age. Like an evil but spoiled child.

I like that no matter how much a character might hate him, if he wants them to like him, wants them to love him, they will believe they truly do when they see him. This allows for a really complex level of disgust to develop for the reader.

It’s kind of like pretending to like your boss but, whenever you see him you really do like him. Only later, while working unpaid overtime, do you remember that you hate him.

It also gives the writer freedom to play with their protagonists and not have them be in control of their own actions. More on that below.

This is a classic loss of control story. Dr Jekyll turns into the monster, Mr Hyde, and then behaves like a villain.

Functionally, this is similar to the mind-control above as it lets your protagonist act like the antagonist against their own free will.

This is a great way for your protagonist to commit crimes, but still be sympathetic to the reader.

I’m not sure it has too much in the way of legs but you’ll get at least one good episode of TV out of it if you play your cards ‘write’.

A non-human protagonist done right is hard, but Jaws pulled it off. Jaws is a shark that is eating people. It’s a black and white story from that perspective.

Any conflict will need to be generated by your human characters. For example, some will side with the shark and some will say: ‘There’s only a 2% chance of dying from man-eating sharks, so why should we use protective shark nets to protect unlucky bathers?’

You get to generate a lot of intrigue here. The non-action conflict will all be caused by philosophical arguments and not by the monster.

This is the original vampire in Western mythology and a fan favourite of teenage girls. This monster works on a number of levels.

I’m not really talking about the original Dracula here, but vampires in general. Although the original book is fascinating from a historical fiction point of view, I recommend it only if you like oddly written stories.

There is a lot of range here. For example, in the recent film Dracula Untold, he comes off as an anti-hero or even just a vengeful hero.

In classic tales, Dracula is more of an unholy scourge inflicted on the peoples of Europe. He preys on them and infects them or kills them as he pleases.

A very different vampire is The Old Count from Terry Pratchett’s Discworld. He is a monster and he will eat you. However, the townsfolk say, ‘He was a real gentleman, always had plenty of things you could bend into holy symbols just lying around. Was polite and courteous, giving people a fair chance, and he provided a much needed source of exercise for the young folk of the town.’ – My own words.

You can play on the overt sexual nature of vampires and their seductive abilities. Lord knows that many a fortune has been made this way.

They, regardless of how seriously you take them, always make interesting antagonists.

Mr Darcy is the main love interest of Elizabeth, the protagonist.

This is a story of breaking through hard outer shells and preconceived notions to find that you actually love your enemy and, in fact, are going to marry them.

You can produce intense emotional responses by creating uncertainty over the feelings of your protagonist for your antagonist. Ideally, you want your protagonist to slowly come around to the idea that they like the antagonist. Then, you change focus to how they themselves might have ruined their relationship with them.

Here the concepts of loneliness and isolation are your antagonists. Possibly, nature as well.

I don’t think this is a very good antagonist, and it doesn’t make for enjoyable reading, but it can be done and it is interesting that people keep remaking it. You’ll see below how I think it can be done well.

For example, Cast Away by Robert Zemeckis with Tom Hanks is not entirely boring. It has funny moments and emotional ones, but I won’t ever re-watch it.

I think this works well as a short part of a longer story. You can include it as part of book or an episode of a TV show.

For example, in Jumanji, Chris Van Allsburg does this with the character of Alan Parrish who gets stuck in the game alone for 30 years and ends up mad because of it.

Or, it can be a chance to reform a character. Your villain could meditate alone for 20 years and come back to the story a changed man, or so he says…

Those were a few ideas I have had for creating worthy antagonists. I hope they give you some good ideas for writing your own.

Let me know your favourite types of antagonist in the comments – with examples, please.