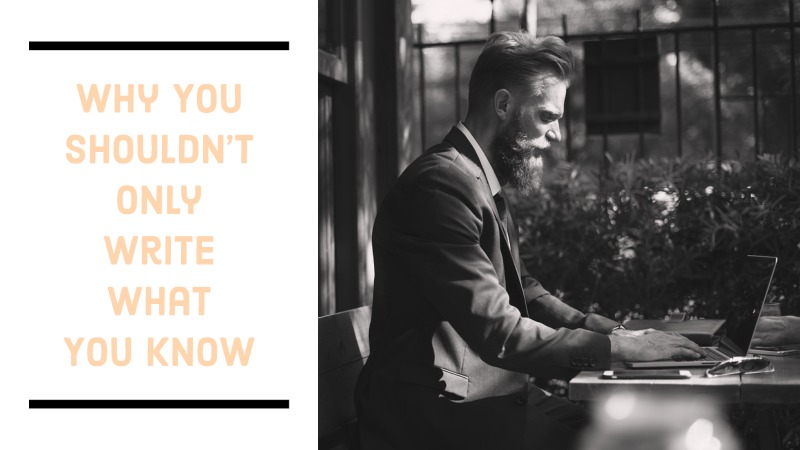 Why You Shouldn’t Only Write What You Know

Writing what you know is great. Well, it’s great if you’re great. But, chances are you haven’t climbed tall mountains or saved children from a burning building.

Chances are you aren’t a hero in a half shell, or a magic boy with a scar, or the best detective London has ever seen.

The way I see it, people who take advice a bit too far end up here:

Now, I could talk all day about my draft of Man Does Nothing At Home, but strangely people always have places to be when I do.

On the other hand, the very same people seem to have endless time to talk about improbably good detectives or magic space wizards with laser swords.

Seriously – What Does Write What You Know Mean?

When authors say this, they don’t mean it literally. That’s why Chewbacca is a space dog who can’t speak, and not a man named George.

What they do mean is that there should be a spark of truth to whatever you are writing.

What Does It Mean? In this case, writing what you know is just writing about something you are knowledgeable about. Maybe, just making some well-informed guesses is good enough for most of us.

Writing About Emotion – Why Age Matters

You often find that writers improve with age. This is not only due to practice, but also because you have had the opportunity to experience more.

It’s difficult to write about loss at a young age, or about fear when you have lived a safe life.

That’s not to say it’s impossible, but you need a good imagination and lots of reference material.

A fact any teacher or parent can attest to is that children are taught empathy, but are born natural monsters. Age develops the ability of an author to imagine the minds of others. And so, their ability to create characters improves with age.

What Does It Mean? In this case, it means that experience makes writing about certain topics easier or at least more believable. There are topics and things that are impossible for a living human to experience. For these, you should not let not ‘knowing’ about it stop you from writing about it. Magic, death, and aliens are just some examples.

On The Other Hand

My favourite genre is mundane fantasy. This is when someone turns a fantastical thing into something commonplace.

To do this, you take a thing you know and add something wild.

Why You Shouldn’t Only Write What You Know

Perhaps, more importantly, write what you know will interest you and other people. After all, 95% of what I know is boring stuff. It’s all how to cook, drive, write code, or wash clothing. Who cares if I never mention any of this in my novel? Notice how people almost never eat or use the bathroom in stories.

What your reader wants is something new. Something that they can’t find at home. They will forgive you the unreality of your writing every now and then if what you are writing is entertaining and interesting.

I mean I never cared that my four favourite childhood characters had shells and lived in a sewer with their ninja master rat father. Did you?

Written by Christopher Luke Dean (What exactly did Donatello do to the machines anyway?)