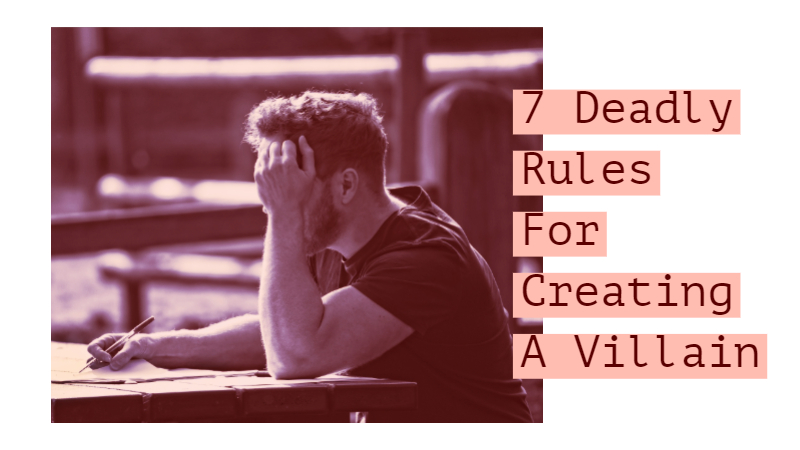 7 Deadly Rules For Creating A Villain

In this post we write about the seven deadly rules for creating a villain for your stories.

Every Story Has A Villain

There wouldn’t be much conflict for your protagonist to overcome if there was no antagonist to stir the pot.

Yours might be the evil villain who opposes everything your hero does. They might be the treacherous double-agent from the past, or the psychotic evil scientist, or maybe just the other woman or other man fighting for your hero’s attention.

Whoever your villain is, making sure they are believable is far more difficult than simply creating a character who does bad things to hold up your protagonist’s progress.

Your job here is to make your villains credible, logical, and believable, but not necessarily likeable. You want the reader to understand that what they’re doing is a negative thing for your hero.

But it’s more involved than just explaining their adverse actions. Your readers need to understand why the antagonist is doing what he or she does, and why they believes their actions are justified and rational.

To make your villains real, three-dimensional people, follow these seven (rather deadly, but always effective) rules!

7 Deadly Rules For Creating A Villain

Villains or antagonists view themselves as victims. They have a reason for their bad behaviour. They are often motivated by revenge.

Bad characters–trapped in the cellar of a dark impulse–don’t know they’re bad. They believe they are the good guys in a world that can’t understand them.

The world is represented by one other character – usually the protagonist – who must be punished for that mistake.

2. Find The Good In The Bad

Remember no one is 100% bad. Try to find the good in the bad. Dig a bit deeper. You will find there’s a scrap of humanity inside the hideousness.

Think of alter egos – e.g., Mr Brooks, Dr Jekyll and Mr Hyde. In real life, when we see someone trying to beat something, we feel sympathy. For example, they may suffer from an addiction.

Give them one characteristic that contrasts their behaviour.

3. Write Against A Stereotype

In order to be considered a worthy opponent, you must portray your antagonist honestly. One way to do this is to balance their inner darkness with their outer demeanour and behaviour. Think of Dolores Umbridge in Harry Potter. She wears pink cardigans and collects plates with kittens on them. This is a gentle, pleasing image. Her words seem reasonable and polite, but there is real threat in them. If she came across as a witch physically, there would be no surprises. J.K. Rowling would’ve created a caricature.

The best villains in fiction have been short-changed. They’ve been cheated out of something by the hero.

They’ll do anything to get what they want because they’ve been overlooked in the past. They’ll crush anyone in their path.

Feed that obsession. Make it real. At the same time, try to make it understandable. When you can also show your villain’s complex, devious, misguided nature from your hero’s viewpoint, you know you’ve created a truly memorable bad guy, and you will have strengthened your protagonist’s character and your plotline at the same time.

Imagine your villain as a shadow of the hero, a doppelganger.

Think about when you created your protagonist. Most likely you created someone you admired, a character with strength and integrity. I’m guessing you took the time to get right inside your hero’s head and understand what made him tick.

Your villain is no different.

Why not give him opposite traits to your main character? This will give you marked contrasts and opportunity for conflict. And just as with real life twins, give him similar characteristics to create a bond between the two.

When you’re writing a hero, a bell goes off every time he does something outside the range of normal behaviour. With a baddie, you can push the boundaries. The same rules don’t apply. There’s something liberating in writing baddies.

With great power, comes great fun for a writer.

6. Show Your Villain Up

In a novel, the villain often needs to look different. It can be a physical deformity that has impacted on their psychology. (For example, they may have a club foot.)

The trick is to be subtle. Think of Hannibal Lecter, a famous villain. He is quite ordinary looking – except for those maroon eyes and metallic voice. Those touches are enough to make him spine –chilling when combined with his behaviour.

The only chance you get to be bad is by writing books.  You can be a villain for 360 pages. You can’t walk down the street and be a villain. But on paper you can get away with it.

Just let it flow. Have fun with it.

Look At Maslow’s Hierarchy Of Needs Below: Is there one thing you couldn’t live without?

Take away one stratum – maybe your one important need. Your baddie has been deprived of this, probably in childhood. Pretend you’re a psychologist. Write a report describing how this deprivation has changed the patient’s life.

Now, write it as a scene for a book – preferably in your favourite genre.

Look back at your lists.